Beginning with the opening ceremonies, the 1996 Summer Olympics in Atlanta were historic for Slovakia. On July 19, for the first time ever, a squad of athletes marched into Olympic Stadium behind the Slovak national flag, which was carried by 33-year-old wrestler Jozef Lohyňa, a bronze medal winner for Czechoslovakia in 1988. President Michal Kováč was there, his coat thrown off in the summer evening heat, energetically waving a white handkerchief in greeting the 70 Slovak competitors as they entered the packed stadium. 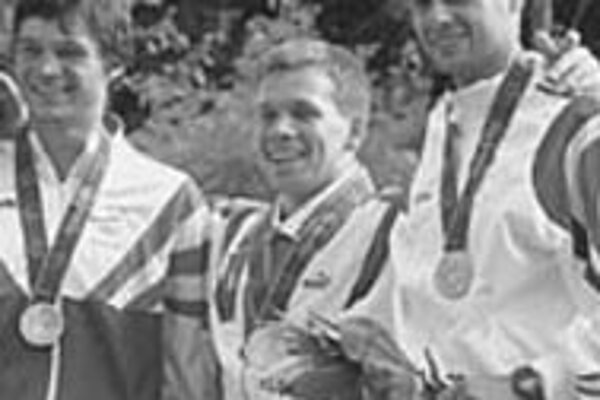 Font size:A-|A+
Beginning with the opening ceremonies, the 1996 Summer Olympics in Atlanta were historic for Slovakia. On July 19, for the first time ever, a squad of athletes marched into Olympic Stadium behind the Slovak national flag, which was carried by 33-year-old wrestler Jozef Lohyňa, a bronze medal winner for Czechoslovakia in 1988.

President Michal Kováč was there, his coat thrown off in the summer evening heat, energetically waving a white handkerchief in greeting the 70 Slovak competitors as they entered the packed stadium. Within the first eight days of competition, two of those athletes had won medals and one of those two had 1 million Sk coming his way, courtesy of the Slovak Olympic Committee.

The nation's voracious appetite for its first medal was satiated when rifleman Jozef Gönci fired off a bronze in the 50 meter air rifle contest with a score of 701.9. "I think I am now among the happiest people in the world," the 22-year-old Košice native said. "Before taking off for Atlanta, my trainer and I did everything we could to ensure success, but we weren't counting on getting to the finals. I thank God that it happened."

Gönci's family rejoiced. "You cannot imagine how much I cried," said Gönci's mother, Anna Gönciová. "When I called to tell my daughter what happened, I couldn't even talk. Now I'll have to take all my money from my account in the next few days and buy all the newspapers with stories about Jožko and save them."

Three days later, attempting to add more hardware to his suitcase in the 3 x 40, an event he had called his best before the Games, Gönci came up a bit short, finished fifth. But later on that same Saturday, Gönci's historic performance was topped by 17-year-old canoeist Michal Martikán. Competing against men as much as twice his age, the teenager from Liptovský Mikuláš was sixth after his first run on the Ocoee River course outside Chattanooga, Tennessee.

His standing, however, was low, considering Martikán had won the World Championships on this course in April. Anything short of a top three finish would have been disappointing. Earlier in the week, Katarína Piačková, a secretary at Martikán's home club KTK Dukla Liptovský Mikuláš, said, "He's the best of our competitors and he is our best chance, we hope, for a medal."

With his compatriots watching back home live on STV, Martikán paddled a perfect second run. Stroking furiously, he cleanly maneuvered through all 25 gates without any penalties. Upon crossing the finish line in a time of 151.03 seconds, he glanced at the scoreboard, saw he was in first and raised his paddle briefly in triumph. Then he made his way to the river shore, grinned and cried as members of his team ran to embrace him.

Before he could claim victory, Martikán had to watch the last couple competitors make their way down the course. He got a scare as his smooth-paddling Czech rival, Lukáš Pollert, threatened to overtake Martikán. But Pollert fell 14 hundredths of a second short and wound up with silver. Martikán's triumph earned him independent Slovakia's first gold medal in a Summer Olympics.

Gönci's and Martikán's successes were not total surprises, but their participation in the Games was not hyped the way Martina Moravcová's was. All the supermarket life-size cut-outs, the newspaper ads, and the magazine covers had made the 20-year-old swimmer Slovakia's most celebrated Olympian before the Games began. With such lofty expectations, many over her fans were disappointed when she failed to reach the finals in any of her four events. She did however win the B final in the 200 meter freestyle, setting a new Slovak record in the process, and earning her a ninth place finish.

"She has done very well and we are proud of her," said her father, Karol Moravec, speaking from the family home in Piešťany. "I think ninth in the Olympics is a very strong performance." He did reveal, though, that Moravcová felt the weight of a country's expectations that she would medal. "She feels disappointed of course," Moravcová's father said. "But you know, that's sports."

Moravcová's was hardly the only tale of woe. Yachtsman Marek Valášek had to delay his departure to Atlanta because he was mugged in Bratislava. But the 23-year-old bounced back in the seawater off the coast of Savannah, Georgia, to finish a surprising fifth in the first race of the yachting competition. But in the fourth stage, Valášek made a crucial mistake and fell out of his boat. He finished twenty-second.

Although the Games' first ten days yielded only two medals for Slovakia, there were other successes. Kayaker Gabriela Bosková took fifth place in the women's single slalom, and tennis player Karina Habšudová advanced to the round of 16, before losing to fourth seed Iva Majoli of Croatia, 6-4, 6-3, 6-4.