RUDOLF Schuster has left office, ending his five-year term on June 14. The former president said that he would not change a single thing he did in the past, leaving observers convinced that while in domestic policy he often acted in conflict with the cabinet, in foreign policy his merit was high.
"He will be seen as a president who succeeded in this area [foreign relations]," said Darina Malová, a political analyst with Comenius University in Bratislava. 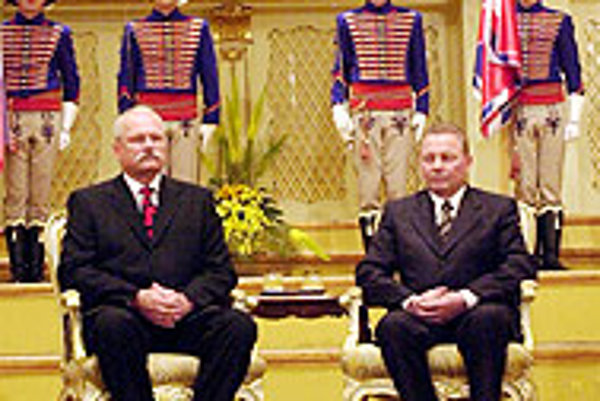 Font size:A-|A+0
RUDOLF Schuster has left office, ending his five-year term on June 14. The former president said that he would not change a single thing he did in the past, leaving observers convinced that while in domestic policy he often acted in conflict with the cabinet, in foreign policy his merit was high.

"He will be seen as a president who succeeded in this area [foreign relations]," said Darina Malová, a political analyst with Comenius University in Bratislava.

"I have always tried to act in favour of the citizens of our motherland, regardless of their nationality or religious and political beliefs," Schuster said in his June 14 address.

"I am proud of the citizens of Slovakia who handled the transformation of a country that was isolated from the democratic world by the Iron Curtain to their own state that only recently became a respected part of united Europe," he said.

Schuster, who entered the cabinet as the leader of the former ruling Party of Civic Understanding in the 1998 national elections, was elected head of state in the first direct presidential elections on May 29, 1999, winning over ex-PM Vladimír Mečiar, the unchallenged leader of the Movement for a Democratic Slovakia party.

Taking the post, Schuster was widely seen as the lesser of two evils in comparison to Mečiar, who had led Slovakia to international isolation as premier between 1994 and 1998.

Schuster, observers agreed, helped the country to overturn its isolation in cooperation with the cabinet and parliamentary representatives. During his term, Schuster welcomed 46 foreign heads of state and went on 113 foreign trips.

"I greatly appreciate the coordination of the foreign activities of the parliament, cabinet, and the president, without which we would not be members of the EU and the North Atlantic Treaty Organisation today," said Schuster.

Schuster had a brush with death during his term when he suffered a perforated colon, which was mishandled by Slovak doctors. Schuster was "born again" according to his own words at that time, in a hospital in Innsbruck, Austria.

In interviews with the foreign media after the life-saving operation, he indirectly accused the Slovak cabinet and parliament representatives of "demanding a premature confirmation from doctors that I was not going to be able to carry out the [duties of the] post".

Today, however, Schuster denies that the developments surrounding his illness had a negative impact on his relations with top state representatives.

However, it remains a matter of fact that, although he came from the coalition camp in 1998, Schuster gradually became a vocal critic of the cabinet and its reforms. He maintains that he was a supporter of reforms throughout the term and that he only wanted to point to the social aspects of the right-wing cabinet reforms.

According to Grigorij Mesežnikov, head of the Institute for Public Affairs think tank in Bratislava, Schuster was often "self-centred", which contributed to the worsening of his relations with the ruling parties.

But in his last June 14 speech, Schuster said: "I would never take back anything that I have done in my life - and not only because it is impossible."

Schuster, a former communist, made his way to top politics by serving as a diplomat in Canada in the early 1990s and later gaining a reputation as mayor of the eastern Slovak city of Košice.

Later, when he created the Party of Civic Understanding, he was seen as the only candidate who could beat the authoritarian, yet very popular, Mečiar.

Ahead of the 2004 presidential elections, Schuster kept his ambitions to run again for the post a secret. He was knocked out in the first round, however, winning only 7.4 percent of the vote. Until this day, Schuster refuses to speak to the Slovak press regarding the election failure and in general has consistently rejected requests for interviews.

Leaving his post, Schuster wished "many wise and just decisions in favour of all citizens of the Slovak Republic" to the new president, Ivan Gašparovič, inaugurated on June 15.

The outgoing president's spokesman, Ján Füle, told The Slovak Spectator that Schuster was planning on starting a foundation with the former heads of state from surrounding and other countries that would help students from families without financial means study abroad.

Schuster, who wrote a dozen books before and during his political career, also wants to write more, and will spend the near future time in Canada shooting a documentary about the country, Füle revealed.

For an analysis of Schuster's term in office, see page 3.