THE DISPUTED introduction of tuition fees for university studies failed on June 17 when the parliament unexpectedly voted against the respective measure.
The cabinet-tailored bill on student loans was to introduce yearly fees of up to 30 percent of annual expenditures on university students, which would be something between zero and Sk21,900 (€550). However, the proposal failed in the initial stage of the legislative process in parliament, falling two votes short of the required amount. Only 67 of the 136 MPs present supported the law. 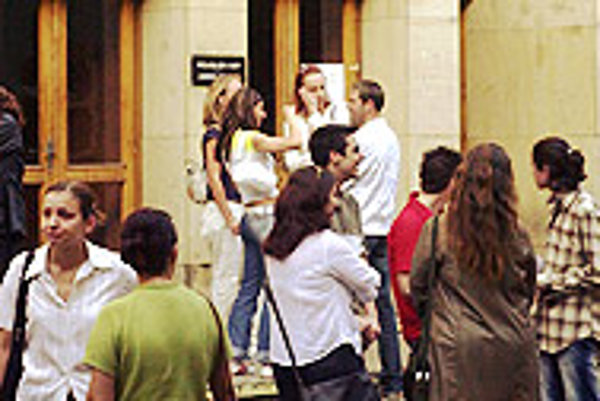 Font size:A-|A+0
THE DISPUTED introduction of tuition fees for university studies failed on June 17 when the parliament unexpectedly voted against the respective measure.

The cabinet-tailored bill on student loans was to introduce yearly fees of up to 30 percent of annual expenditures on university students, which would be something between zero and Sk21,900 (€550). However, the proposal failed in the initial stage of the legislative process in parliament, falling two votes short of the required amount. Only 67 of the 136 MPs present supported the law.

University fees are considered one of the big issues of the current cabinet programme.

Despite the recent rejection, Education Minister Martin Fronc and his Christian Democratic Movement (KDH) party are determined to look for ways to make the law effective on January 1, 2005 as planned.

It remains unclear, however, how the KDH wants to push the measure through. According to existing rules, a law rejected by the parliament cannot be resubmitted earlier than in six months' time.

The plan has kept society divided between left-wing opponents of the legislation and right-wing supporters of tuition fees.

The reform's opponents, such as Dušan Čaplovič from the opposition party Smer, argued that passing the bill would "only prove that those who have money will be able to buy their education and university diplomas."

Ľudmila Mušková, an MP from the Movement for a Democratic Slovakia party, said during parliamentary discussion of the bill that, if tuition fees were approved, students would have to start paying for university without having any guarantee that they would receive a better education.

"We are putting a financial burden on students without any guarantees that the quality [of education] will improve," she said.

On the other hand, supporters of the law argued that the student loans legislation, which incorporated tuition fees, would help universities gain additional operational funds, and distribute a greater amount of money in the form of student stipends to people from low-income families. They said that it would, in effect, improve the quality of Slovak education by creating greater pressure on universities to provide quality classes in competition for students.

In reaction to the rejection of the bill, New Generation, the youth chapter of the ruling Slovak Democratic and Christian Union said that they took the message "with frustration and disgust".

"The reform was to bring about a higher quality of education, increase the capacity of universities, and provide motivation and better pay for [university] teachers," said chairman Peter Markovič.

Apart from the parliamentary opposition parties, the Free Forum (SF) MPs refrained from voting. This move came as a surprise, as the SF has consistently repeated that it is in favour of the reforms. It has also stressed that before reforms are passed the social impact of the laws needs to be assessed.

The SF MPs were elected to parliament on the ballot of the Slovak Democratic and Christian Union in the 2002 national elections, but later left the party over disagreement regarding the policy style of the party's leader, PM Mikuláš Dzrurinda.

The SF deputies argued that there was too little time to discuss the legislation.

"We do not a priori reject the introduction of the fees, but we do not want to be put in a position where the minister comes eight minutes before the vote and wants to discuss the law with us," said SF member Ľubica Navrátilová.

She said that, provided that MPs are made familiar with the social impact of the reform, the SF would support the law when it is submitted to parliament again in January.

"We are prepared to support the reform provided that the impact [on students] will be endurable," she said.

The non-parliamentary Democratic Left Party, which was part of the ruling coalition in the previous election term, and who held the education minister post at that time, welcomed the rejection of the fees and even appealed to Fronc to resign from his post.

The minister, however, was not prepared to do so and remarked after the failed vote that it was just a lost battle. "I will certainly try to re-submit the law," Fronc told journalists on June 17.