A little touch of Cuba in Slovakia

ELIZABETH Díaz Marcheco is a Cuban-born singer who has performed in the alto section of the Slovak Philharmonic Choir since 1993. She has taken part in some of the choir's most high-profile performances, and sung under the baton of such world-renowned conductors as Claudio Abbado, Valery Gergiev, and Ewald Körner. She is also the founder and conductor of Canto Latino, a choral group of nine singers from the Slovak Philharmonic Choir, which performs arrangements of Cuban folk songs and accompanies itself on traditional Latin American instruments. 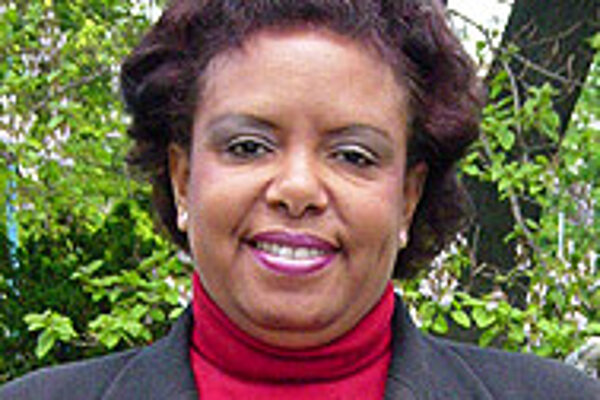 Font size:A-|A+  Comments disabled
ELIZABETH Díaz Marcheco is a Cuban-born singer who has performed in the alto section of the Slovak Philharmonic Choir since 1993. She has taken part in some of the choir's most high-profile performances, and sung under the baton of such world-renowned conductors as Claudio Abbado, Valery Gergiev, and Ewald Körner. She is also the founder and conductor of Canto Latino, a choral group of nine singers from the Slovak Philharmonic Choir, which performs arrangements of Cuban folk songs and accompanies itself on traditional Latin American instruments.

The Slovak Spectator recently caught up with Marcheco to ask about her career, culture, and her life in Slovakia.

The Slovak Spectator (TSS): How did you get your start in music?

Elizabeth Díaz Marcheco (EDM): Well, I was born in Havana in 1963. When I was eight years old, I started taking piano lessons, which I continued for seven years. In 1978, I started studying choir conducting at conservatory.

TSS: Is the situation in Cuba difficult for artists?

EDM: Not really. Musicians have many different opportunities to express themselves, and the state really does support culture. I taught at a Slovak music school, so I was able to compare the Slovak and Cuban educational systems, and I feel certain things, like the entrance exams, are actually more difficult in Cuba because Cuban parents really want and expect their children to become professionals. It's a very good system, on a very high level.

TSS: What about government censorship? Do all lyrics have to be approved by censors?

EDM: Of course. Lyrics must be in accordance with the regime, or neutral.

TSS: Why did you decide to come to Slovakia?

EDM: While I was a student at conservatory, a Czech singer named Eva Novotná visited Cuba. Her husband was a professor at my university, and he knew I wanted to study singing. At that time, many of my classmates were going abroad, legally or illegally, so, when Eva and I started cooperating on some concerts, she told me about a very good Slovak music professor named Marta Beňačková, and offered to help me study in Slovakia, if I wanted to. I applied to Cuba's Ministry of Culture, and it allowed me to come here for four years. So, at first, I had permission, but then...

TSS: You did not go back?

TSS: What was the hardest thing to adjust to in Slovakia? The language?

EDM: No, the worst thing was the awful change of weather. I can't tell you how many times I fell down, because I didn't know how to walk on ice [laughs].

TSS: And what were your first experiences with the Slovak language like?

EDM: It was very difficult, because my Slovak professor and I spoke only German with each other, which I'd studied at university for two years, so my first experience with Slovak was when I auditioned for the Slovak Philharmonic Choir. They spoke to me sometimes in German, sometimes in English, but then I sang a Slovak song, which wasn't required, but my professor had wanted me to do it.

The song was Povej, vetrík, povej by Eugen Suchoň. It was too low for me and I hadn't learned it as well as I should have... Then I sang an aria and a Cuban song, but the Slovak song actually sounded best. The Philharmonic had one vacancy in the alto section and... I ended up the lucky one.

TSS: Why have you chosen to sing in a choir rather than have a solo career?

EDM: Getting into the Slovak Philharmonic Choir was always my main goal, and it's been a great honour for me, because it's the best choir in the Slovak Republic. It definitely has an excellent reputation throughout Europe. Choir singing is also a continuation of my career in Cuba, where I sang with the National Philharmonic. I've never really trained to be a solo singer. In 1994, I did a solo concert in Spain... but I love choir singing, and my dream is to record 14 Cuban songs.

TSS: Classical music is usually rather serious, but have you had any humorous moments on stage?

EDM: Not really, no, but one of my most recent performances was in Galanta, where I lived for some time. It's known for its large Hungarian population, so I performed 13 traditional Hungarian songs. It was my most difficult performance ever because I knew Slovak by then, but no Hungarian at all. But the audience liked it, and I closed it with hits like My Way, and some other popular tunes.

TSS: How many other Cubans live in Slovakia? Do you ever meet each other?

EDM: There are about 100 Cubans here, with approximately 25 in Bratislava, and the others in Ružomberok, Žilina, and other towns.

They all came during communism and stayed. Every two to four months we party in a restaurant, talk, dance, some come with their children. It's always a great time, but unfortunately that's the only chance we have to meet.

TSS: Do you have family here?

EDM: Yes. My mother has been here for seven years, so our home is something like a 'little Cuba'.

TSS: And do you want to start your own family here?

TSS: So, do you imagine the man of your dreams to be Slovak, Cuban?

EDM: I don't think about it that way. It's much more important to me how he is on the inside, not where he comes from.

TSS: And now that you've lived here for 12 years, what do you feel inside?

EDM: It's strange... in the beginning, I had moments when I wanted to go back to Cuba, but the easier life here, better professional opportunities, and the Slovak Philharmonic's reputation eventually won out. These possibilities just don't exist in Cuba.

So I've grown accustomed to Slovakia, especially in the last three years.

People here can be a little bit closed sometimes, Cubans are more open, but my life here is comfortable. My colleagues have absolutely no problems with foreigners, so I really feel at home.

And I appreciate that, even though our cultures are different, many people have expressed interest in my culture, and have accepted me for who I am.

This summer, Marcheco will perform Carmen by Georges Bizet in Sevilla, Spain, with conductor Lorin Maazel. For more information about Canto Latinoł Marcheco's choral group, visit its website: www.cantolatino.host.sk, or contact Mária Hlavačková at mh-arco@stonline.sk or 0903/201-540.