KARIM Chaibi doesn't dream. At least not the way most of us do: in bed, at night, asleep. Actually, his dreams do take place at night, but in his art studio. Karim Chaibi creates his own dreams in oil and canvas. They are surreal, colourful, and profoundly personal.
Whether you like surrealism or not, Chaibi is a most interesting man, although he hardly seems the rebellious type. 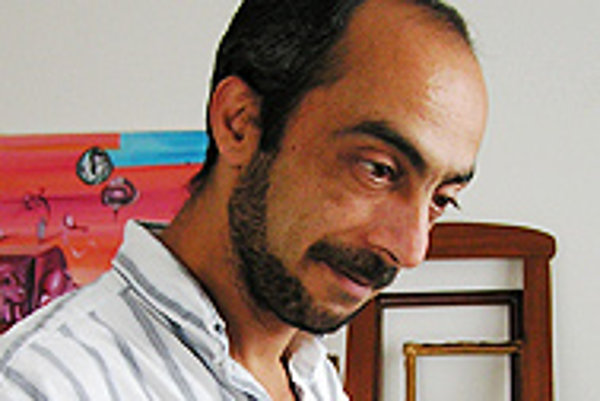 KARIM Chaibi doesn't dream. At least not the way most of us do: in bed, at night, asleep. Actually, his dreams do take place at night, but in his art studio. Karim Chaibi creates his own dreams in oil and canvas. They are surreal, colourful, and profoundly personal.

Whether you like surrealism or not, Chaibi is a most interesting man, although he hardly seems the rebellious type. Born in Tunis in 1963, his childhood and family were traditional: his father was an academic, his mother a homemaker. All were Muslim. No one was an artist. Chaibi was heading for a spiritual life, having completed his education in Islamic theology. But instead of becoming a mullah or imam, he married a Jewish American diplomat and became a painter, a storyteller, and a student of Lacanian psychoanalysis. That's a long journey in barely 40 years.

"Marrying a foreigner and leaving my country certainly brought down many fences for me," says Chaibi. And thus began his journey of self-discovery.

"I had no formal art classes," he explains. "I played with colour. I was influenced by psychoanalysis and surrealism. I wanted to make the unconscious flow on a canvas. That was my dream."

Islamic art is not traditional, not even representational, let alone surreal. Believing that only God can make representational forms, at least within a religious context, Muslims have developed an artistic culture of ceramics, calligraphy, geometric designs, and architecture.

And while the Muslim holy book, the Qur'an, does not speak against the creation of figural images, only the making of idols, Chaibi recalls how contemporary artists in Arabic countries, such as Saudi Arabia, would become paranoid that they were accidentally creating recognisable, and forbidden, images that could provoke an unpleasant encounter with the ethics police. "Friends would call me and ask me to look at their paintings, saying 'Does this look like a woman to you? I didn't mean it to, but now I see it'."

Chaibi's show, titled Morpheus after the Greek god of dreams, is not, in a Western perspective, at all controversial. But his work is not at all what comes to mind at the mention of Islamic or Arabic art.

The show is intensely personal. Most of Chaibi's paintings, and there are a lot of them, are small. The size makes them intimate: You have to move close to see them, stepping into Chaibi's highly personal dream world. In their size, their vivid colours, and in their magical, dreamlike subjects, the paintings are arguably somewhat reminiscent of Mexican artist Frida Kahlo's works. Painting in oil, his palette is Mediterranean: strong yellows, oranges, and blues predominate. His subject, brought to our attention under a bright Tunisian light, is almost always himself, but examined from inside and out. Sometimes his face is clearly recognisable. Sometimes we see what is inside his head. Every canvas includes ovals or egg shapes: For Chaibi they are symbols of fertility and creation. We can see Chaibi rediscovering himself and, in turn, being reborn with each subsequent self-discovery.

But Chaibi paints with words as well, and has done it for as long as he can remember. He explains: "There is a long tradition of storytelling in Tunisia. As a child in the late 1960s, I remember watching a famous storyteller named Adbul Aziz al Aroui on television every day. I went with my father to the cafés and listened to the men there telling stories. And then there were bedtime stories my father told us every night," Chaibi reflects. "He was good."

The stories Chaibi grew up with were always structurally the same. "There was a good guy and a bad guy," he remembers. "You had to have a moral and a celestial intervention that saved the good guy. And magic realism. The trees and stones spoke, that sort of thing."

Now Chaibi invents bedtime stories for his three children. And for adults as well. His exhibition includes a story, also titled Morpheus, about a shepherd who follows a dream into a dream, and learns about himself. Like Chaibi's paintings, it is a dream-like philosophical self-examination.

"I want to use art, either paintings or stories, to go to that deep part of myself, to explore and expose it," he says, trying to explain what is clearly a complicated and personal idea. "Deep inside us, there are many things that don't make sense. The world of the unconscious doesn't have the same structure as the conscious world."

But what does he find inside? Does his art have a message for us? Again, Chaibi is philosophical: "We humans are the message. The medium doesn't matter. Grammar, etymology - it doesn't matter. The history of any image is something you may not know until you give yourself a chance to examine it and examine yourself."

And does the knowledge that emerges from all this careful self-study make him free? Chaibi smiles as he reflects, "No, but the process is lovely."