The sun shines stronger in Austria

SOLAR energy is a wasted resource in Slovakia. Austria, which shares the same natural conditions and climate as the Slovak Republic, is a global leader in thermal-solar power, with 30 times the number of solar panels as Slovakia. 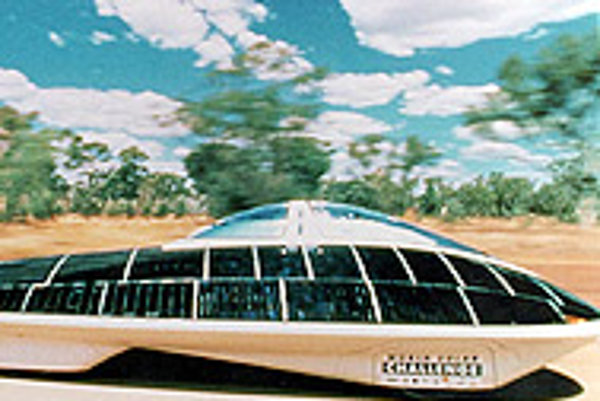 Font size:A-|A+0
SOLAR energy is a wasted resource in Slovakia. Austria, which shares the same natural conditions and climate as the Slovak Republic, is a global leader in thermal-solar power, with 30 times the number of solar panels as Slovakia.

The interesting fact is that Slovakia has one of the longest traditions in solar energy development in Europe. But a lack of support for renewable energy development since the Velvet Divorce and zero government subsidies for thermal-solar power installation has led to the country's decline.

Milan Novák, the director of Slovak energy company Thermo/solar, is convinced that solar and other renewable energy sources deserve greater attention from the state. Novák says it is a matter of protecting the environment, as well as helping the European Union decrease its dependence on fossil fuels.

In the 1980s, Czechoslovakia ranked among the leading countries in Europe that were transforming radiation from the sun directly into usable heat. The state supported thermal-solar investments through subsidies accessible to state companies, cooperative farm companies and residential property owners.

Two of the three largest producers of solar-powered systems in the former Czechoslovakia were situated in present-day Slovakia. After Czechoslovakia split, however, the pace of solar energy development in Slovakia eased.

Novák told The Slovak Spectator that soon after it gained independence, Slovakia immediately started lagging behind the Czech Republic. Today, the difference is noticeable.

"Support for renewable energy sources in the Czech Republic is more generous than in Slovakia. In the Czech Republic, a home owner can subsidize 50 percent of the cost of constructing a solar-powered system. Additionally, he can claim a 5 percent value added tax," he explained.

In Slovakia, individuals get no subsidies, and the VAT is unified at 19 percent.

The European Commission wants to install 100 million square metres of solar collectors by 2010 in the "old" EU member states.

Novák thinks there is no way for the EC to fulfil its goal, even if it counted the collectors in the 10 new EU-member countries. In 2003, the European Union plus Switzerland reported solar collectors in approximately 12 million square metres. Germany, Austria and Greece shared 80 percent of the total.

Experts complain that it is difficult to analyse and compare the presence of solar systems in new EU-member countries because few reliable statistics exist.

According to Novák, "The Czech Republic has the best system of support for renewable energy sources. Then, with a rather big lag, follows Hungary. Poland and Slovakia stand at the bottom of the Visegrad 4 countries."

Although the number of solar collectors in Slovakia is not even comparable to the one in Austria, Slovakia does not come in last place, even among the EU15 nations. France, Great Britain and Italy are behind Slovakia. "It is probably thanks to our solar past," Novák added.

According to Novák, government subsidies for renewable energy would level the playing field, which is currently dominated by fossil fuel consumption.

With the exception of hydro-electrics, renewable energy sources are at the beginning stages of development. Further technical progress will likely decrease the price of energy production.

Solar collectors in Slovakia are used primarily to heat drinking water. Novák says there is growing interest in using solar energy to heat pools or as an additional energy source to complement other heating systems in houses.

He thinks that the current government's policy underestimates the potential of solar energy in Slovakia. For example, the state's policy names rooftops as the only place for installing solar panels when it is equally possible to position them on walls or on the ground next to houses.

State officials envisaged the use of solar energy only for residential buildings, schools, hospitals and hotels. "They totally ignored, for example, farms or industrial buildings," Novák said.

Environmental groups estimate that a home equipped with solar power can save about 60 percent of its energy on heating drinking water, and 20 to 30 percent on other heating systems.

Based on an Austrian analysis, solar energy has the potential to cover about 20 percent of the overall energy used for heating.

"About 17.6 percent is a realistic estimate for Slovakia too. I would like to mention that the estimations come out of the current technical possibilities. New solutions aimed mainly at effective thermal conversion and long-term accumulation of heat can significantly increase this share," Novák concluded.

He said that six square metres of solar panels with 300-litre water storage is enough to heat 70 percent of the water consumed by a four-person household. The costs for installation would run to about Sk120,000 (€3,145). In Austria, a comparable system would cost about €4,900. However, an Austrian home owner can apply for a state subsidy covering 25 percent and a municipal subsidy covering about 15 percent. The property owner could also apply for a tax deduction of €500. The final price for an Austrian home owner would thus be €2,500.