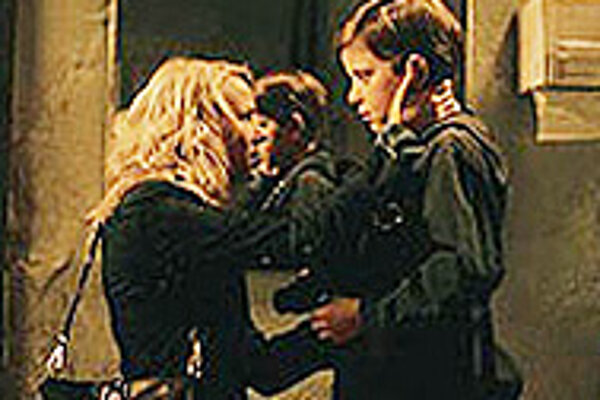 THERE'S nothing quite as terrifying as family, or at least that's what decades of horror films would have us believe. From low budget fare like The Texas Chainsaw Massacre through higher profile releases like The Texas Chainsaw Massacre (the remake) and The Shining, family dysfunction was at the heart of all carnage. Gore Verbinski's The Ring (2002) proved no different - although it obscured much of its familial critique with a strange videotape and a vengeful ghost.

It may have been the videotape and the ghost that caused audiences to flock to theaters, but it was the undercurrent of family troubles that made The Ring more resonant than most modern-day horror movies. Ultimately, this social commentary took a backseat to the desire to be terrifying (something that The Ring really wasn't - in actuality it's far more creepy than terrifying). Nevertheless, the subtext is still there.

It's also in The Ring 2, but then again so are the videotape and the vengeful ghost. Once again, it may be these latter two things that dominate the plot, but it is the specter of mother-child dysfunction that hovers over everything and supplies it with meaning. But it's important not to overestimate the movie's quality: Like its predecessor, The Ring 2 merely flirts with social commentary; its producers know far too well that it is horrific special effects that fill the seats. Sadly, The Ring 2 is not nearly as good as its predecessor - somewhat surprising because it was directed by Hideo Nakata, the man responsible for the original Japanese Ringu, which inspired Verbinski's Hollywood remake. Anticipation for a far stranger and more abstract movie was certainly warranted; instead, Nakata has made a completely ordinary sequel.

Like most sequels, it struggles to simultaneously set itself apart from and build on top of what came before it. It does little (if anything) to improve on Verbinski's template, and its continued storyline feels oh-so predictable.

After Seattle journalist Rachel (Naomi Watts) and her overly precocious son Aidan (David Dorfman) narrowly escaped the wrath of the evil spirit Samara and her deadly videotape (somehow a projection of her ghostly rage, or something), they relocate to a small town in Oregon to put their past behind them. But, they soon discover, escaping is not so easy. It seems that Samara - who initially became a disgruntled, murderous ghost due to abuse and neglect from her adoptive parents - wants to take over the body of Aidan, an introspective young boy who is particularly susceptible to her nightmarish visions. The first movie suggested that this susceptibility resulted from a similarity in upbringing: Rachel was far too busy to properly care for her young son. Her neglect was not as outwardly destructive as that of Samara's parents, but it fed Aidan's turmoil nonetheless.

The Ring 2 finds Rachel far more attentive to her child's needs. Perhaps this is why Samara haunts them so relentlessly; all she wants is a caring mother and she sees this potential in Rachel. After Aidan grows particularly tormented and sick, however, concerned doctors and social workers suspect that Rachel's poor parentage is to blame.

Realizing that the only way to truly save him is through Samara's past, Rachel tracks down the evil ghost's birth mother, Evelyn (a nearly unrecognizable Sissy Spacek), who encourages her to use a parenting technique that only a homicidal maniac could wholeheartedly endorse.

It is through this idea of parental violence that both Rings get interesting. But The Ring 2 revels even more in the distracting (and increasingly less effective) imagery of phantom videotapes, eerie spirits, and possessed animals. The result, though certainly unwanted, is quite fitting: It feels like a copy of a copy of a copy.