THE BUTTERFLY is Slovakia's new symbol, a picture to go along with its new motto: Little Big Country. Apparently, the great brains behind the idea borrowed a little something from chaos theory: Slovakia, like a butterfly, might be little but the flapping of its wings has the power to provoke an economic, diplomatic and political hurricane on the other side of a world. 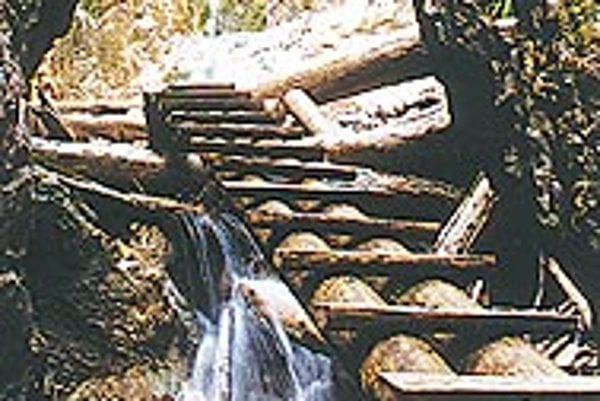 Font size:A-|A+  Comments disabled
THE BUTTERFLY is Slovakia's new symbol, a picture to go along with its new motto: Little Big Country. Apparently, the great brains behind the idea borrowed a little something from chaos theory: Slovakia, like a butterfly, might be little but the flapping of its wings has the power to provoke an economic, diplomatic and political hurricane on the other side of a world.

It might sound far-fetched, even pathetic, but that is precisely how the Economy Ministry and the Slovak Tourism Board introduced their new campaign to increase Slovakia's visibility as an attractive tourism destination.

The campaign, launched a few days ago on June 1, will attempt to make Slovakia a brand name inseparable from its motto and symbol.

"In one year, we want there to be a distinct and identifiable brand of Slovakia. Our goal is clear: attract as many tourists as possible, to say as many good things as possible about Slovakia and to inspire as great an interest in our country as possible," Economy Minister Pavol Rusko told the press at the official campaign launch.

Rusko thinks the butterfly motif "is modern and light".

"It has life, energy, colourfulness and delicacy. It has mystery and something that inspires interest. It has everything that Slovakia has as well," Rusko said.

Alexandra Očkayová, the tourist board's director of strategic marketing and external relations, explained the motives behind the campaign.

"The aim is to build a strong brand. Before, Slovakia had nothing. Now we offer a country that is as colourful as life. We offer a little big country. This claim opens opportunities for the promotion of various products for various segments."

EU structural funds are financing the campaign: Sk2.6 billion (€70 million) to develop tourism infrastructure and facilities and Sk700 million (€17.9 million) to promote the country as a tourist destination. Most of the promotion finances will pay for booths at international tourism trade fairs and cover the cost of buying foreign media placements.

Television spots featuring the motto and symbol have already appeared in the Czech Republic and Poland. One is scheduled to appear in The Netherlands soon.

"We had to target certain countries initially. We received the biggest number of tourists from the Czech Republic and Poland, so we aired the spots there first. The Netherlands was identified as a country with the greatest tourist potential, a country where everyone loves travelling," Rusko said, indicating that other countries might be targeted in forthcoming seasons.

The campaign is targeted at the public in general, as well as investors, business people in tourism, and journalists.

Rusko said the ministry and tourist board is already preparing press and info trips to Slovakia. Before this summer, Slovakia expects to welcome journalists from Japan, the US, the Czech Republic, Germany and Italy.

How does the country rate?

According to a survey conducted by GfK for the Economy Ministry and tourist board, most visitors to Slovakia are happy to return. However, the study revealed that it is difficult to attract new visitors.

Although 26 million people cross Slovakia's borders [in both directions], only 1.4 million of those passing through spend at least one night in Slovakia. Nevertheless, visitor numbers were up in 2004 from 2003.

Most of Slovakia's tourists are Czech and Polish, coming into the country to spend their summer holidays. Reasons for visiting Slovakia vary, however. Austrians come most often to watch theatre performances [opera and ballet] and to visit Bratislava.

Repeat visitors are drawn to the country because they know culture, have enjoyed summer holidays here, want to take advantage of low-cost Slovak spas and like to visit Bratislava. Ukrainians and Polish people come specifically to shop; Hungarians cross the border to visit family and friends.

The survey suggested that the quality of tourist services needs great improvement, along with the tourist industry's attitude to customers.

Minister Rusko is confident that service quality is a matter of time. Greater incomes from tourism will enable managers to hire better employees and to pour more investments into facilities.

Gabriel Kuliffay, director of the Economy Ministry's tourism department, says the ministry wants to use EU funds from 2007 to 2013 to educate Slovaks that tourism can be an important source of income and that quality plays a crucial role. According to Kuliffay, local and municipal governments bear a significant burden of responsibility in communicating this message.

"There are two possibilities: First, to educate Slovaks to like foreigners. I am confident that Slovaks are sincere they just do not know how to show it. Second, local governments must encourage people to tidy up the front of their houses, to put pelargonium [flowers] in the windows. If the people are not interested [in beautifying their regions], grant money will not help. It is a long and difficult process," Kuliffay said.

Grumblings from the industry

Many people say it is high time to launch an aggressive campaign promoting Slovakia because its neighbouring countries have a significant head start. They believe that being too passive in the campaign will result in Slovakia losing millions of crowns in potential income.

Industry analysts say it is too early to assess Slovakia's new motto and logo, since results will take time. However, some have expressed opposition to spending campaign money in The Netherlands, where the Slovak tourist market is not well established.

"It makes no sense to address potential customers in countries where the Slovakia market is poorly established. Even if the campaign is good in The Netherlands and inspires people's interest in Slovakia it will not have an impact. Dutch tour operators promote the Czech Republic, Austria and Hungary in their catalogues. Dutch interest would be in vain," Robert Kohlmann, director of Pressburg travel agency, told The Slovak Spectator.

He added that local tour operators in the Czech Republic, Germany and Poland have historically promoted Slovakia. If the campaign focused on these three areas, the effort would generate bookings and income.

Tomáš Hasala, executive office from Limba travel agency, agreed: "I have objections to the choice of countries [the campaign is targeting]. The Czech Republic and Poland are perfectly all right, but The Netherlands is just a mistake. There are definitely other countries we should have addressed first, like Hungary or Germany."