THE SLOVAK embassy in Baghdad was the target of a suicide bombing on June 11. The bomb, which left four people injured, followed a series of attacks in the Iraqi capital the same day. 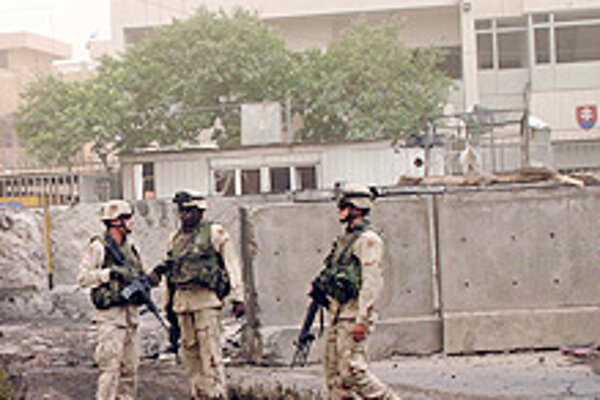 Font size:A-|A+0
THE SLOVAK embassy in Baghdad was the target of a suicide bombing on June 11. The bomb, which left four people injured, followed a series of attacks in the Iraqi capital the same day.

Slovak officials confirmed that the suicide bomber detonated an explosive in front of the embassy in southeast Baghdad. While none of the embassy's employees were wounded, the blast injured four Iraqi civilians and guards.

The explosion damaged the walls surrounding the embassy and a portion of the embassy building itself, the TASR news agency reported.

Vladimír Šimko, speaking on behalf of the Slovak Intelligence Service (SIS), told The Slovak Spectator, "We knew we could be targeted but had no specific information."

Šimko said a more specific report on the June 11 bombing would be available after the SIS obtains information from partner services in Iraq.

According to the Slovak Interior Ministry, experts are analyzing the situation. Some media sources said that Al-Quaeda was indirectly behind the attack, operating through Jordanian militants led by Abu Musab al-Zarqawi.

On June 11, Reuters reported that "the bomber was targeting a meeting of agents of the US Central Intelligence Agency at the [Slovak] embassy".

When asked whether he could confirm or deny whether CIA agents were in the Slovak embassy, Šimko said, "We will not comment on this information in any way."

He said the attack confirms the conclusions drawn by the SIS in its recently published report on the risks related to Slovakia's NATO membership and the support of US-led military operations.

"As a NATO member state and the member of the allied coalition that actively supported the US military operations, Slovakia took over its share of responsibility for the development in Iraq and Afghanistan as well as the safety risks and threats resulting from the active participation of Slovakia's military units in these operations," reads the SIS report.

In a statement issued June 13 by Scott Thayer, Charge d'Affaires of the US Embassy in Bratislava, Thayer said that the embassy "condemns strongly the attack on the Slovak Embassy in Baghdad".

"We are relieved that no Slovak citizens were injured and we wish to extend our sympathy and best wishes to the Iraqi security personnel who were injured," reads the statement.

"The bombing is particularly despicable because Slovakia's purpose in Iraq is to help Iraqi people build a free and democratic country."

It continues: "Once again, terrorists have demonstrated that their primary goal is destruction. Only if all of us stand together can terrorism be defeated."