Too much a mystery

FOR A man who so regularly elicited the most intimate details from total strangers, Alfred Kinsey remains remarkably enigmatic. During the 1940s and 1950s Kinsey revolutionized the way people thought about sex. 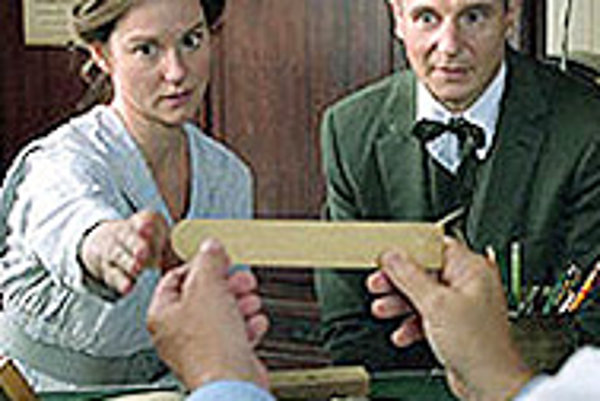 FOR A man who so regularly elicited the most intimate details from total strangers, Alfred Kinsey remains remarkably enigmatic. During the 1940s and 1950s Kinsey revolutionized the way people thought about sex. He treated the subject scientifically, using candid personal interviews for research. Yet, even as he convinced person after person to tell him about extremely private moments and desires, Kinsey kept much of his own life hidden in the shadows.

Gods and Monsters director Bill Condon is smart enough to recognize this contradiction. Nevertheless, his latest film, a titular biopic of Kinsey, struggles to shed light on its mysterious protagonist. This is not for lack of information: Key relationships (father/son, husband/wife) and formative experiences (early sexual difficulties, homoerotic awakenings) are rendered with extreme care. Rather, this Kinsey - as played by Liam Neeson - seems impenetrable.

As always, Neeson's presence demands attention. But throughout the film it's difficult to tell what or - even worse - that Kinsey is thinking. He expresses thoughts verbally and occasionally explodes in fits of rage or despair. What really motivates these actions, however, can only be pieced together through dialogue and biographical details. Though Kinsey approaches all around him with great openness, he comes across awkward and aloof.

Perhaps this portrayal is accurate, but it doesn't make for an interesting character. Kinsey might make us love its hero for what he did, but not for who he was. His profound effect on the way we approach sexuality (or the way we should hope to) - as a complicated, infinitely varied, and fluid human characteristic worthy of serious study - is indeed indisputable.

So too is Kinsey's radicalism. Unsurprisingly, the US of the 1940s and 1950s wasn't prepared for his views. Condon captures this through montages of newspaper headlines about Kinsey's alleged perversions and scenes in which government officials spew ludicrous accusations of "Communist infiltration". This implicitly acknowledges Kinsey's revolutionary nature, but the explicit portrayal is far tamer. By not offering any true insight into the strange goings-on inside the man's head, Kinsey presents a fairly ordinary, though highly intelligent, figure who happened to have advanced views on sexuality.

Not coincidentally, the two most appealing characters are those that best help us understand Kinsey's allure. Laura Linney plays Kinsey's wife, Clara, as a woman constantly torn between emotional strife and unconditional love. For sporadic moments she makes us believe in the fascinating complexities of her husband (and not just his work). Kinsey's first homosexual lover, research assistant Clyde Martin, is given great depth by Peter Sarsgaard, whose eyes can simultaneously express intense longing and curiosity.

Unfortunately, though these two feelings seem to have propelled much of Kinsey's work, Neeson can't seem to summon them. Instead, we're left with a man we know but don't really understand at all.