Microprocessors - the hearts of computers

FORTY years ago, a young technician by the name of Gordon Moore determined the early development of microelectronics, which even today defines the strategy of the semi-conductor industry, worth 200 billion dollars. 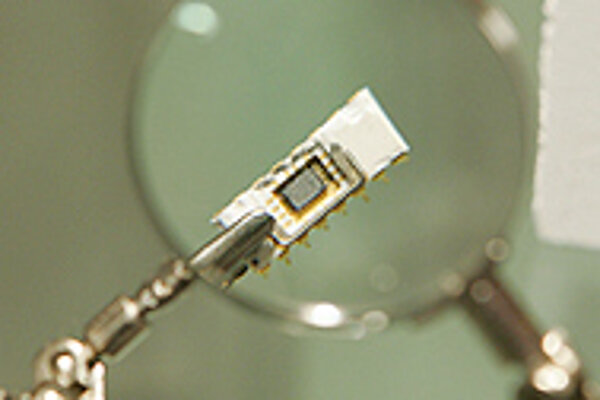 Font size:A-|A+0
FORTY years ago, a young technician by the name of Gordon Moore determined the early development of microelectronics, which even today defines the strategy of the semi-conductor industry, worth 200 billion dollars.

Moore, who co-founded the Intel corporation in 1968, predicted that the number of transistors able to be placed on a computer chip would double each year. This became known as "Moore's Law". He also said that, despite being more complex, their price would fall.

This stimulated the emerging electronics industry into the production of the microprocessor - a computer's brains - and many other integrated circuits, which gave birth to personal computers, the Internet, mobile phones and videogames.

Thanks to the development in chip production we now have films and TV programmes with realistic animated pictures, cars that consume less fuel with fewer pollutants, new ways of searching for domestic animals (using implanted ID chips) and geographical navigators (GPS), among other things.

To see what is inside these devices, visit Microprocessors: The Hearts of Computers at the Slovak National Museum in Bratislava, which opened on December 19. To commemorate the 40th anniversary of Moore's Law, everything from the world's first computer processor to the latest micropro-cessors is on show, until February 25, 2006.

Fans of mobile processors can, for instance, admire the especially successful Intel Pentium M, which is one of the main components of Intel Centrino mobile technology. Slovaks will definitely be interested in seeing the first computers made in this country - the PMI80 and the PMD85 - or the first Slovak PC, the PC-88.

But this is not only a historical show. The latest version of the two-core server processor, the Intel Itanium 2 (code-named Montecito) is another attraction at the exhibition.

"This processor has not yet been introduced onto the market. The museum's visitors will be among the first in the world to have the opportunity to see it. It's a processor that contains more than 1.7 billion transistors, which can process an immeasurable quantity of information per second. Just to compare, the world's first microprocessor, the Intel 4004, contained just 2,300 transistors. That's 740,000 times less," said Pavel Svoboda from Intel.

A separate room is dedicated to each group of processors at the exhibition. There are examples of different types of processors and detailed descriptions of the objects. There are also basic boards and entire computers from different periods on display.

A graph illustrates the chronology of the most important developments in the PC world, corresponding with Moore's Law.

Patrik Veselík, a hardware teacher at the High School of Applied Cybernetics in Hradec Králové, the Czech Republic, has rented the exhibits for the show from his private collection.

The oldest exhibits come from the Intel Museum in Santa Clara, California. Peter Orviský, editor-in-chief of the DiGi REVUE magazine, compiled the part dedicated to the first Slovak computers. The exhibition is the first complex presentation of microprocessors in Slovakia. For more information on the exhibition visit www.itnews.sk/mikroprocesory.