TWENTY international artists and architecture theorists took part in a site-specific symposium at Bratislava's icon of modernist architecture, the Hotel Kyjev, between April 4 and 13. 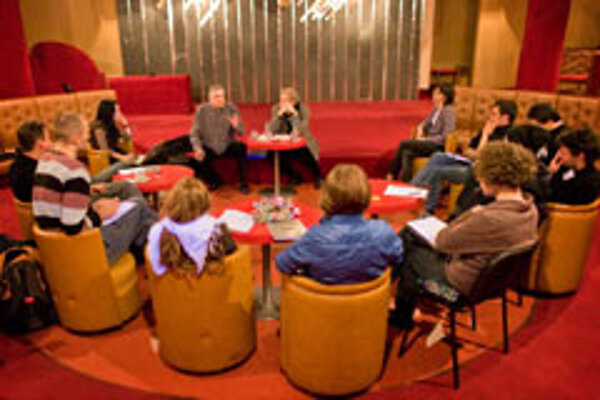 TWENTY international artists and architecture theorists took part in a site-specific symposium at Bratislava's icon of modernist architecture, the Hotel Kyjev, between April 4 and 13.

The project was the brainchild of the International Coffeeshop, an artist-run initiative dedicated to artistic collaborations that address art and politics throughout Europe.

The meeting's theme was entitled "End/Ending," which was particularly relevant considering that the Hotel Kyjev has been slated for demolition.

In late 2006, Lordship, a British-based real estate developer, unveiled the Centre Plaza project, a Sk5-billion plan to redevelop the entire area around Kamenné Square. According to Bratislavahotels.com, the project envisions two new hotels, office space, luxury apartments and a new home for the Tesco department store.

Lillian Fellmann, director of International Coffeeshop, arranged for the symposium's participants, who were mainly from Slovakia, Switzerland, the United States, Germany and Poland, to receive unprecedented access to the hotel's numerous unique architectural features.

"The Hotel Kyjev, aside from its beauty, is symbolic of the notion of ending," Fellmann told The Slovak Spectator. "Nobody knows what will happen to it, although its life is undoubtedly doomed and because of this, it is a fantastic location for our artists."

The opening reception for the week started with a lecture from Ivan Matušík, the Kyjev's architect and a vocal opponent of the demolition, who took guests on a tour of the area.

Each morning started in the uber-stylish Luna Bar with a so-called critical breakfast, a talk given by various international figures from the arts and architectural industry. Proponents of Slovakia's modernist movement, including architects Štefan Šlachta and Henrieta Moravčíková, head of the Docomomo modernist building conservation group, delivered impassioned speeches on the future of the Kyjev to a packed audience.

The remainder of the days were then left to the artists to create works that addressed the theme, with daily presentations that culminated in an exhibition on April 12.

Zurich-based artist Roland Roos spent the entire week inconspicuously restoring worn down parts of the hotel. Staff and guests walked by without batting an eyelid as he fixed and filled holes and repainted damaged areas.

Berlin-based performance artists Nicolas Galeazzi and Beatrice Fleischlin contributed by demonstrating a week in their life if they were 80. They began with daily presentations and ended with a full make-over that visually advanced their appearance. Their finale was a chilling "dance of the dead" in their hotel room.

Resident Slovak performance-party artist Eric Binder took a more anarchic approach to his presentation, using his personal experiences of the hotel as inspiration. He arrived in a battered white Mercedes Benz, stormed into the Luna bar, pulled out a guitar, and proceeded to sing-shout a profane English song, until a friend set his guitar alight.

The highlight of the week was soprano Maria Turnová, a close friend of Bratislava-based gallery owner Petra Feriancová, who performed sections of Verdi's La Traviata (including a scene she subtitled "Falling apart - The End is Inevitable") to tumultuous applause.

The closing show also included text and video projections, installations and sound pieces that filled the hotel's beautifully dingy interiors, beguiling some guests in the process.

Fellmann deserves a great deal of appreciation for putting this extremely impressive event together.
Meanwhile, Lordships's senior management has been tight lipped about how the Centre Plaza project is progressing, leaving it to forge ahead in a wave of muted controversy.