ALAIN Cools has always believed that Slovakia, like Belgium, would become part of the Schengen zone and adopt the euro, just as he believes that it has set the right priorities to achieving a knowledge-based society. 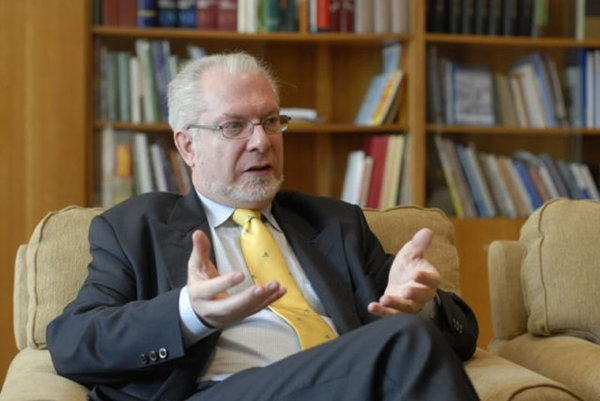 ALAIN Cools has always believed that Slovakia, like Belgium, would become part of the Schengen zone and adopt the euro, just as he believes that it has set the right priorities to achieving a knowledge-based society.

Another of the many similarities he sees between the countries is Slovakia’s ideal location, which he said makes it a gateway between the East and West.

The Slovak Spectator spoke with Belgian Ambassador to Slovakia Alain Cools about education reform, the untapped potential for tourism between the two countries, and the charms of Brussels.

The Slovak Spectator (TSS): Slovak officials have declared several times that development of a knowledge-based society is its ultimate goal. However, Slovakia still has a long way to go in catching up with many western European countries when it comes to investment into education, science and research. Is there anything from Belgium’s experience in this area that Slovakia could use?

The harmonisation of curricula is very important too. In Belgium, anyone who completes high school is considered ready for university. Of course, universities enjoy more academic freedom and there is more competition, which is normal and very healthy. But we have been trying to be consistent in teaching the basics in both subsidised state schools and the subsidised free school network, which is the so-called Catholic network. Both networks follow the same curriculum.

The third very important thing is that Slovakia should orient its academic world towards the needs of economy. Belgium has been very successful in doing so. We have a number of universities, for example in Liege and Ghent, which have excellent contact with the business sector.

The IMEC (Interuniversity Microelectronics Center), near Leuven University, serves as a good example of ties between business and academia. It has been able to set up a number of research projects, as well as some production units in nanotechnology. Belgium’s pharmaceutical industry also demonstrates this through research and development. You might know that Belgium is one of the biggest producers of vaccines.

TSS: Is Belgium a popular destination for foreign students?

AC: Young people like Belgium’s atmosphere and we do have some internationally renowned universities, such as in Leuven, Brussels, Liege and Ghent. Life in Belgium is easily manageable for a foreigner. The distances between places are very short - in 20 minutes you can find yourself in the midst of a different culture – and Brussels is an international city.

There are also exchange programmes for Slovak students. One under way right now is open to eight students.

Belgium also has something to offer post-graduates. I have met a number of diplomats posted in Brussels whose first impression was to like it because it is close to Paris, London and Amsterdam, and not that far from Berlin either. But after a year or so, those same people usually said that the main advantage of Brussels is that it’s close to… Brussels.

AC: Yes, you are right, people primarily associate Brussels with the EU, but that is a considerable advantage because it gives the city recognition as a world city. For example, after Washington, it has the largest press and diplomatic corps.

TSS: The increasing lack of qualified labour is already causing worries to investors in Slovakia. Has Belgium remained immune to this problem so far?

AC: Belgium is also facing a lack of qualified labour. Unemployment is at about seven percent based on EU statistics. We do have regional disparities in terms of unemployment, just as you have almost full employment in Bratislava, while in eastern parts of the country the unemployment is higher. This gap is narrowing in Belgium. However, there are some jobs that are very difficult to fill, such as plumbers and welders. Belgium is trying to be flexible. After we identify the jobs for which we lack workers, the work permits for those professions will be easier to obtain.

Again, one of the solutions is linking education with business needs. I have seen television advertisements that try to direct people toward jobs that are perhaps less prestigious, but needed for the economy, and rewarding.

TSS: In 2006, you said that Belgium would be taking steps towards easing restrictions on the free movement of labour from the new EU member countries. What is the progress on that?

AC: Our new government has introduced a short-term opening for economic immigration that considers the situation on the labour market and the effect of abolishing the restrictions. There are still a number of [EU] countries whose citizens need work permits in Belgium, so the movement is not completely free, but the Belgian Minister for Migration and Asylum has said that the government would take all the possible moves towards lifting the remaining restrictions. Now the date is May 1, 2009, but it will probably be earlier. It is good news for Slovakia as well as the EU’s newcomers, Bulgaria and Romania.

TSS: With countries from the former Soviet Union and the Balkans offering cheap labour and enticing tax incentives, there is some concern that the Czech Republic, Slovakia and Poland might eventually not have what it takes to attract foreign investors. What makes Slovakia interesting to Belgian businesses?

AC: Any investor’s primary concern is location, location, location. Slovakia is in an ideal location as an irreplaceable gateway between the East and West. As a small country surrounded by larger ones, Belgium has taken advantage of its location, and that is one of the reasons behind its success.

Slovakia has received a lot of large investments and these are not going to disappear.  It will take some time for these to relocate. You will probably have to do what Belgium has done: move to higher added-value production. I am glad to see that your authorities are absolutely convinced of that and have set their priorities accordingly.

Then invest into infrastructure, which will help bridge the disparities between the regions, and invest into education and social inclusion. I believe Slovakia can do all of it with the help of structural funds totaling about $12 billion over seven years, which is as much as the volume of foreign investments that you got between 1995 and 2005. It is a huge opportunity.

TSS: What are Belgian investors’ experiences with Slovakia and its cities?

AC: Investors have had excellent experiences with Slovak cities, which have been very helpful in providing all the available incentives. I must say that Belgians are happy here. They like to criticise things, but when you get to the core of their opinions, they are happy here.

AC: I think it may still be somewhat early for substantial Slovak investments in Belgium. Slovakia has achieved quite a lot. You have beaten Belgium as the main automobile producer per capita and now you are even exporting cars to Belgium. However, in order to invest in Belgium, the knowledge-based economy has yet to develop further. But I am absolutely confident that the time when Slovak firms will invest in Belgium is coming.

TSS: Slovakia has entered the Schengen zone and is in the home stretch of adopting the euro.

AC: I have always believed that Slovakia would enter Schengen and adopt the euro. I am convinced, and I say this in all my reports, that Schengen was an extremely important move because it was a sign that Slovakia finally belongs to Europe. I grew up hearing all those horrible stories about people not being able to travel. In Bratislava, when you went to Devín Castle, you could see Austria on the other side of the river and you actually saw where the Iron Curtain was. The curiosity and the urge to go abroad was extremely strong. Now you can travel without obstacles.
The euro will bring you a number of advantages: more transparency, simplified accounting and wider access to the larger European market. However, you have to deserve the euro every day and every country has to continue the efforts to sustain the criteria.

TSS: Is Slovakia on the map for Belgian tourists? Have the countries sufficiently explored the potential for tourism?
AC: The potential has probably gone untapped. A lot of people travel to Brussels for work, but Belgium also is an excellent tourist destination. There is also a lot of life in the older cities, like Brugge, Antwerp, Mons or Namur. Our landscape is quite different from Slovakia - we have a coastline, but we do not have mountains. However, the hills in the east are beautiful. Belgium is very diverse in terms of landscape and culture. I think we should be better at selling Belgium, because we have a lot to offer.

When Belgian tourists come to Slovakia, they follow the same path as many others: they tour just
Bratislava’s Old Town before continuing on to Budapest, Vienna or Prague. They also are likely to go to hiking in the mountains, skiing or even fishing. I recently received an inquiry about Slovakia’s fishing regulations.

TSS: Which fields of Slovak culture are the most interesting to Belgians and what about Belgium catches Slovaks’ attention?

AC: History has been one of the most interesting aspects. Few people know that the countries share some common history. From 1713-1794, Belgium was under Austrian rule and Maria Theresa was our empress too. The second thing we share is the wonderful, preserved architecture. Slovakia has some characteristics, such as the market place on the Main Square, which are completely atypical for Western Europe. We also share a love of music. We, just like Slovaks, do not have that many world famous composers, but we have many good performers and orchestras. We have one of the best known competitions in the world - the Queen Elizabeth competition. We are also a nation of painters and we do take great pride in that.