A MEMBER of Slovakia’s water slalom team has won gold at every Summer Olympics since the country became independent in 1993. And according to its trainers, the team is likely to repeat that success next month in Beijing. 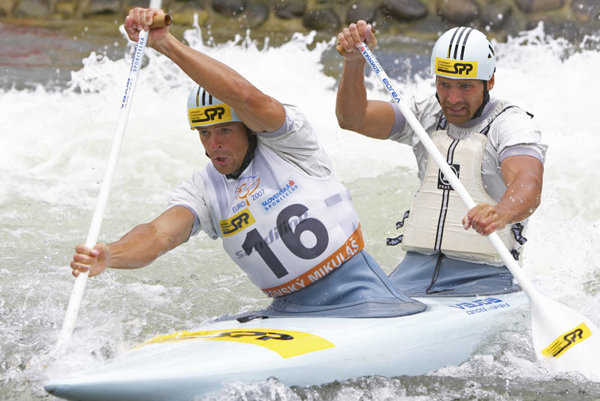 A MEMBER of Slovakia’s water slalom team has won gold at every Summer Olympics since the country became independent in 1993. And according to its trainers, the team is likely to repeat that success next month in Beijing.

All of them are past Olympic medalists. The fifth athlete on the team will be Peter Cibák.
Michal Martikán, a four-time world champion competing in the C-1 (canoe single) category, won gold in Atlanta in 1996, becoming the first Slovak athlete to win Olympic gold after independence. At the following two Olympics, in Sydney in 2000 and Athens in 2004, the now 29-year-old took home silver medals.

There are high hopes as well for the Hochschorner twins, for whom Beijing will be their third Olympics. After two gold medals at the last two games, these legendary brothers are within reach of a golden hat trick – top honours in the C-2 (canoe double) category at three consecutive games.
The Hochschorners look to be on a good path. They recently scored their ninth World Cup victory, coming in first at the World Cup 2008 in Augsburg, Germany on July 5.

“The Hochschorners are in very good shape,” Róbert Orokocký, the head of the Slovak team in Augsburg and the coach of kayaker Jana Dukátová, told the SITA newswire. “They are really well prepared for the Olympics.”

The 28-year Hochschorners are the only Slovak Olympic canoeists who took part in all World Cup events this year. Martikán sat out all three rounds in favour of training for the Olympics; and Peter Cibák and Elena Kaliská, who compete in the kayak-single category, skipped two rounds and one round, respectively.

Kaliská, 36, is the only woman on the water slalom team. She will be battling in China to repeat her gold-medal performance at the previous Summer Olympics. Beijing will be her fourth games. She finished fourth in Sydney in 2000 and 19th in Atlanta.

She came close to winning a medal in Augsburg, finishing fourth in the K-1 category. Jana Dukátová, her main rival for the Olympic nomination, wound up second.

Slovak canoeists have been training individually since returning from their recent training stay in Beijing.

“Meanwhile, Peter Cibák came in fifth in the K-1 category at the World Championship in La Seu d'Urgell, Spain in the second weekend of July. This was his last race prior to the Olympics.”

Water in Beijing is a challenge

“The channel is very demanding,” Orokocký told The Slovak Spectator. “But I think that it suits our athletes, who are technically skilled, so this might be to our advantage.”

The Slovak athletes agree that the channel will pose a challenge.

“It offers an endless number of variations for setting the gates,” Martikán, who considers the channel the most demanding and beautiful artificial channel in the world, told SITA.

Water slalom trainers said the reasons the sport is so popular in Slovakia are tradition, the country’s good training conditions, and especially the enthusiasm of athletes, their families and coaches.

“It is above all the immense eagerness from coaches and parents that creates a very good environment for them,” Orokocký told The Slovak Spectator.

For example, Martikán, Cibák, and the Hochschorners are all trained by their fathers, and their whole families are involved in the sport, he said.

“Everybody expects the maximum number of medals,” Orokocký told The Slovak Spectator. “The best prospect is four golds, though we are going there determined to win as many medals as possible. The athletes have been preparing very conscientiously, as has the entire sports world.

“The water in Beijing is difficult, so we certainly will need a stroke of luck as well. So we hope Slovakia keeps its fingers crossed for us, because it certainly won't be simple.”
With SITA reports