IN RECENT days, something more sinister than the usual political rancor has echoed through the halls of parliament. Media reports describe MPs and members of the coalition telling bare-faced lies, spewing profanities, and even uttering anti-Semitic slurs. Such a deterioration of civility has evoked strong condemnation from political experts, non-governmental organisations, and the public. The main players in the recent drama are Justice Minister Štefan Harabin (HZDS), HZDS chairman Vladimír Mečiar, and former justice minister Daniel Lipšic (KDH). 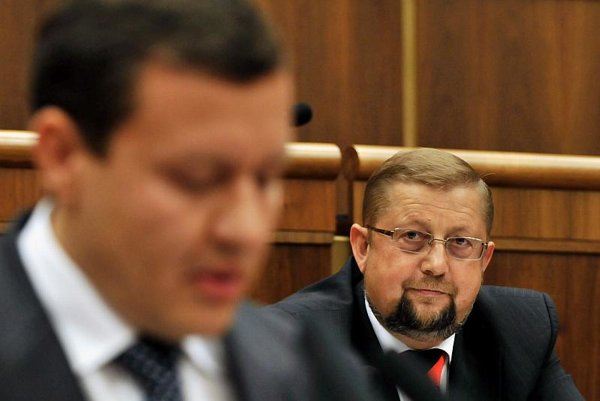 IN RECENT days, something more sinister than the usual political rancor has echoed through the halls of parliament. Media reports describe MPs and members of the coalition telling bare-faced lies, spewing profanities, and even uttering anti-Semitic slurs. Such a deterioration of civility has evoked strong condemnation from political experts, non-governmental organisations, and the public. The main players in the recent drama are Justice Minister Štefan Harabin (HZDS), HZDS chairman Vladimír Mečiar, and former justice minister Daniel Lipšic (KDH).

The main incident occurred on September 4 during an unscheduled parliamentary meeting to debate a proposal to oust Harabin as justice minister. The proposal was submitted by Daniel Lipšic and Lucia Žitňanská (SDKÚ), who have accused Harabin of being on friendly terms with Baki Sadiki, the alleged boss of a drug gang that operates in Slovakia.

As evidence against Harabin, Lipšic read from the transcript of a phone call between Harabin and Sadiki made in 1994. Lipšic argued that their jovial conversation and use of first names proved their closeness.

Moreover, Lipšic alleged that he also had the outline of a letter by Peter Filip, the former head of the criminal department at the General Prosecutor’s Office, asking Harabin, who was a justice of the Supreme Court at the time, to recuse himself from cases concerning Sadiki.

"Do we want the government to include a minister who is friends with the head of an Albanian drug mafia?” Lipšic asked.

When it came time to mount a defence, Harabin accused Lipšic of falsifying the transcript.

Prime Minister Robert Fico, in a discussion with journalists on September 4, warned that the opposition would face consequences if it was proven that the materials were false.

“This is not funny any more,” he declared. “It is unacceptable to attack the deputy prime minister (Harabin) with forged and purpose-made documents.”

In the end, the effort to dismiss Harabin failed. Only 55 MPs voted in favour and 75 voted against it. One MP did not vote.

The offensive remarks were made during the debate on the no-confidence motion against Harabin.

The first occurred when Harabin made a comment that was picked up by a live microphone in front of him.

“You will go to jail, you bastard!” Harabin said in reference to Lipšic, as broadcast by the TA3 news channel.

Opposition MPs immediately criticised the remark, but Harabin denied saying it, despite the broadcast.

Another of the offensive remarks was made by Mečiar, who asked whether one of Lipšic’s ancestors had the surname Lipstein.

He explained that when his friend and former top HZDS representative Augustín Marián Húska worked in the Jáchymov uranium mines as a prisoner of the Communist regime, he was interrogated, “tortured and molested by a certain Mr. Lipstein, whom Húska up to this day believes is related to Lipšic”.

“No such ancestor of mine exists,” Lipšic responded.

Mečiar continued to make reference to Lipšic’s Jewish origin and the German origin of his surname, which is common among Slovak Jews. Harabin picked up on Mečiar’s line of questioning and asked Lipšic whether he was ashamed of his ancestry.

“You remind me of some Nazis who had Jewish ancestry and yet were able to kill innocent children, women, old people in concentration camps, just to prove their loyalty to fascism,” he snapped at Lipšic.

“What is the difference between Goebbels and Lipšic?” he continued.

As with Harabin, Mečiar was immediately criticised for his comments. He denied that he “had ever uttered any hint of anti-Semitic character”.

“Why, if Lipšic seems to be the proponent of a new ideology, or maybe even crooked views, can’t we search if there is a basis for this in his genes?” he asked.

After the no-confidence motion failed, Harabin admitted to journalists that he had used a profanity and threatened Lipšic.

“I lost my temper,” he explained.

Lipšic reacted: “The last time a justice minister threatened his political rivals was in the 1950s, the Stalinist era.”

General Prosecutor Dobroslav Trnka confirmed to journalists on September 9 that the phone call between Harabin and Sadiki had come from files kept at his office.

Regarding the anti-Semitic comments, František Alexander, president of the Central Union of Jewish Religious Communities, told The Slovak Spectator that he considers Mečiar’s comment about Lipšic’s genes to be reminiscent of Nazi ideology.

“This would mean that the laws Mečiar respects are the Nuremberg Laws,” Alexander said, referring to a set of anti-Semitic laws passed by the Nazis in 1935 that dehumanised Jews and set the stage for deportations to concentration camps.

Martin Bútora, former ambassador to the U.S., and Grigorij Mesežnikov, head of the Institute for Public Affairs think tank, told The Slovak Spectator that the events were a disturbing sign that Slovakia’s political and spiritual culture had entered alarming territory.

So they organised a petition that has attracted 36 signatories from various spheres of Slovak social life. The petitions calls Harabin and Mečiar’s comments “disgraceful”.

“We condemn the remarks directed at Lipšic, whose relatives were victims of violence during World War II,” the petition reads. “The sentiments uttered by Harabin and Mečiar resemble those from the 1930s spoken in the Reichstag.”

“The infectious virus of nationalism is spreading among youth and to other layers of society,” the petition warns.

It goes on to state that its authors have long noticed displays of ethnic and racial intolerance in Slovak politics.

Nationalist rhetoric has become “a political weapon that taps into the most primitive instincts based on negative stereotypes,” it contends.

They argue that this incites other politicians to “more openly present their ethnic and racial prejudices, and use this rhetoric when confronting their political rivals”.

As NGOs began to condemn Harabin’s and Mečiar’s words and outrage grew among political analysts and the wider public, Fico criticised Harabin as well.

“It is inappropriate for a politician to make comments in parliament that smack of anti-Semitism," Fico stated at a press conference in Zvolen on September 9, following the commemoration of Holocaust Remembrance Day. “If someone deliberately and systematically states such opinions, he doesn’t belong in government.”

Zeev Boker, the Israeli ambassador to Slovakia, said at the commemoration that Israeli representatives were concerned not only about the recent statements, but other anti-Semitic remarks they had heard.

“They insult the memory of the millions of Jews who died in Holocaust, as well as the memory of those who risked and in many cases lost their lives to help the oppressed,” Boker said.

Deputy Prime Minister Dušan Čaplovič told The Slovak Spectator that anyone who makes such comments should not be a member of government.

“I think such things should be clearly and resolutely condemned. And civility put in its place,” Čaplovič said. “Racial, ethnic, and religious origins are off limits. This is ridiculous and improper in the 21st century."

On September 9, Harabin was heckled by protestors while laying wreaths at the Holocaust Memorial in Bratislava.

“Boo, Harabin! Get out!” the protestors shouted.

But political analyst Miroslav Kusý told The Slovak Spectator that Slovak society still has a lot of progress to make when it comes to awareness of racial and religious discrimination.