THIS October, less than a year after Slovakia joined the Schengen zone, a German woman named Christa Tautz came to Bratislava to see the place where her son, Hartmut, died a painful death. 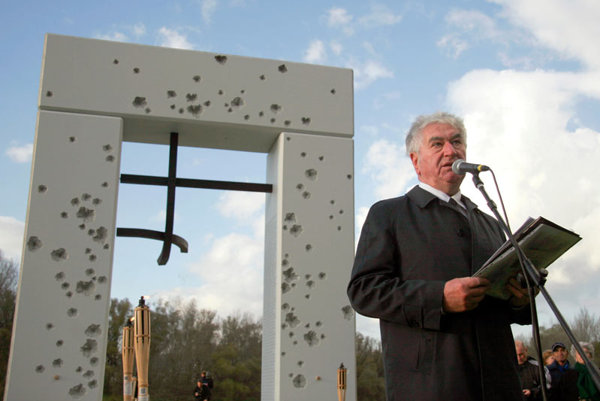 THIS October, less than a year after Slovakia joined the Schengen zone, a German woman named Christa Tautz came to Bratislava to see the place where her son, Hartmut, died a painful death.

Hartmut was an 18-year-old clarinettist from the former German Democratic Republic (DDR) who was killed in 1986 while attempting to flee across the Slovak border into Austria. According to archives at the Nation’s Memory Institute (ÚPN), which reconstructs Slovakia’s Fascist and Communist eras, Hartmut was mauled to death by border guard dogs in Bratislava’s Petržalka district. What makes his death all the more tragic is that, according to the results of his autopsy, Hartmut would likely have survived had the border guards sought immediate medical attention for him.

At the end of May this year, the ÚPN filed an official request with the General Prosecutor’s Office that charges be brought in 42 cases of killings on Czechoslovak borders during the totalitarian regime, including Hartmut’s case. But no charges have so far been brought.

Twenty-two years after her son’s death, Christa Tautz found the strength to make his story public. She spoke first to ARD, Germany's public television station, and later to The Slovak Spectator.

Until the summer of 1986, Hartmut lived with his parents in the East German city of Magdeburg. His father was a dentist and an opera singer. His mother was a dancer, first of classical ballet, then of modern dance. Hartmut was artistically talented as well, as a clarinettist, and made tremendous progress over the years, his mother recalled.

But in 1986, when Hartmut turned 18, he confronted a series of drastic changes in his life. It was his last year of secondary school, which meant, like all boys his age, he had to complete four weeks of military training. A delicate, sensitive teenager who weighed only 50 kilograms, he was very likely teased and bullied, his mother told the Spectator, recalling that her son told her never to ask about his training.

“I believe he decided to escape his military service at any price,” Tautz told The Slovak Spectator.

Based on an instructor’s advice, Hartmut asked to join the army orchestra, but he was turned down because his aunts and uncles had lived in West Germany. He also passed his final school exam, but was told, for the same reason, that he could not go to the college he had dreamed of.


As if that weren’t enough, Hartmut’s father died of a heart attack. Just six weeks later, he tried to flee to Austria.

“Hartmut lost a big part of the support he had at home,” his mother said. “Everything seemed to come crashing down at once.”

Hartmut never told his mother of his plans. Instead, he made up a story that after his final school exam, his class was going on a trip to Soviet Union. He even packed his bags.

Several days after her son’s alleged departure to the Soviet Union, his mother was summoned to the police station and informed that he had died.

“I told them it couldn’t be true, that he was in Leningrad,” she said.

But, unfortunately, it was true. Officials ruled out the option of bringing the body to Magdeburg. She was told he would be buried in Bratislava, and asked only if she wished for his body to be buried or cremated. His mother demanded to travel to Bratislava.

“They told me it was forbidden,” she said.

But she persisted, insisting that she would not leave until they promised to bring her son’s body back to Magdeburg.

“Suddenly, there was a huge ruckus,” she recalled. “Doors were banging and phones ringing.”

In the end, the officials agreed to transport Hartmut’s body to Magdeburg, but under the strict condition that his coffin not be opened.

“I never did, and still don’t, understand that,” she said.

By this time, all of Magdeburg had learned of Hartmut’s fate. Many people attended his funeral, including family from West Germany. Even so, an official in charge of army recruitment came to the family’s flat and fiercely inquired as to why Hartmut was not present for his military service.

“I think he was actually someone from the Stasi (East German secret police),” she said.


What the documents reveal

The ÚPN documents about Hartmut Tautz reveal the following facts, which were taken from an investigation conducted by a military prosecutor after Hartmut’s death.

On the night of July 30, 1986, Hartmut deserted his military post and fled across the GDR-Czechoslovak border. Since both countries were part of the Soviet bloc at that time, the border was relatively porous. He eventually made his way to Bratislava, where he stayed in a hostel.

Hartmut made several trips to the Austrian-Slovak border in Bratislava’s Petržalka district to see how well it was guarded. At that time, the border region was very narrow, so it could be observed from a commonly used road without attracting attention.

At 22:15 on the night of August 8, Hartmut cut the wiring on the Petržalka side of the border and began running across a corn field towards Austria.

Two border guards, Ivan Hirner and Oldřich Kovář, were alerted to the intrusion and released two dogs to track him.

Hirner and Kovář testified about the incident as early as in the summer of 1986.

They told the investigator that by the time they reached Hartmut, he had already been attacked by the dogs and was lying on the ground, screaming for help, in German.

“A big part of his hair had been bitten off, complete with the skin. He was bleeding profusely. He was also wounded on the temple,” Hirner said.

But neither Hirner nor Kovář sought medical attention for him. According to Hirner’s testimony, Kovář simply picked up Hartmut’s ID card and began interrogating him about whether he had acted alone, and where he had been heading.

“The foreigner didn’t answer,” Hirner testified. “He only groaned in pain.”

He added, “I immediately notified the officer on duty, who arrived shortly afterwards.”


At that point, Hirner said, he leashed the dogs and returned to duty, leaving the officer to tend to Hartmut.

The autopsy report from August 11, 1986, signed by forensic pathologists Milan Kokavec and Jaroslav Sochor, states that Hartmut’s injuries were severe, but not immediately life threatening. The border guards detained Hartmut at 22:30, but he was admitted to the Army hospital at 23:50, even though it was only half an hour away.

“Hartmut Tautz had no injury that would be ‘incompatible with life,’ or which would have led to inevitable death,” the pathologists concluded.

Yet Tibor Gaplovský, the military prosecutor who investigated Hartmut’s death, came to a completely different conclusion. In a ruling dated September 19, 1986, Gaplovský wrote that he was closing the case after finding that no one was criminally responsible for Hartmut’s death. Incredibly, Gaplovský even cited the results of the autopsy.

“The autopsy found that ... the death of this person [Tautz] could not have been prevented, even by early medical aid,” he wrote.

The Slovak Spectator contacted Gaplovský, now general director of the Railway Police, who said that he stands by his ruling to this day.

“He was brought there immediately,” Gaplovský said. “But, unfortunately, the injuries were so severe that even immediate medical attention in the Army hospital could not have prevented his death.”

When asked about the death certificate’s conclusion, Gaplovský responded: “The doctor is not a know-it-all.”

He added, “If the emergency room was directly on the border, next to the barbed wire, if they did what they could, the conclusion would have been the same than bringing him ten, maybe fifteen minutes later, when they transported him to the Army hospital. So I wouldn’t start speculating here.”

But pathologist Jaroslav Sochor remains convinced that Hartmut could have been saved.

“The boy had suffered no injuries incompatible with life,” Sochor reiterated to The Slovak Spectator. “We could not write that he was mauled to death by dogs, as the dogs just bit him. After all, the circumstances were that he was not found dead, but had been driven here and there.”

“Instructions were given to begin charges in every single case,” Močková stated.

About three months after her son’s death, Hartmut’s mother found an unmarked letter in her mailbox. It was from Hartmut, who must have asked someone to send it to her.

“Hartmut wrote that he could not live like this anymore and that he considered escaping to the West to be his only chance,” Tautz said.

She emphasised that she was not seeking revenge for her son’s death, as the border guards had only followed orders.

“If they acknowledged that they did something wrong and how badly they wounded me, I could forgive them,” she said.

She believes that those who conceived of closing the border and authorised the use of deadly force are the people who should be held responsible.

“Hartmut lives in me forever,” she said, adding that there have been times, sitting or eating breakfast, when she misses him, and will suddenly hear the sweet melody of a clarinet on the radio.

“This is when I say to myself, ‘Hartmut is with me,’” she said. “Then I see him in front of me. And that lifts me up. It is really beautiful.”

About 600 people – men, women, and children – were killed on the Czechoslovak border with Austria and West Germany between 1948 and 1989. Some of them were trying to flee at the time of their death, but some were just passers-by.

So far, no one has ever been charged for the crimes.