FOUR representatives of shepherds’ families from Mongolia came to Slovakia to learn how to produce durable maturing cheese while being helped by Slovak instructors. After their return to their homeland, they will teach more families in their community. 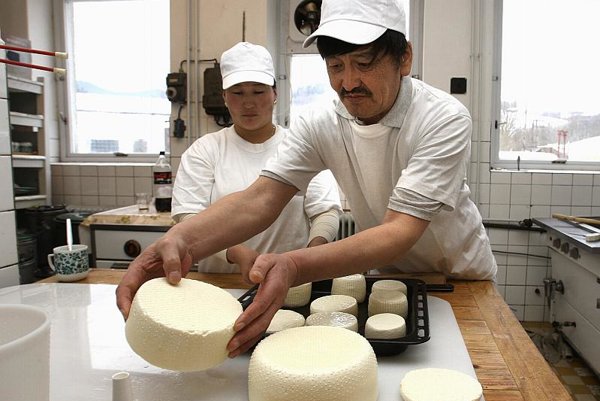 FOUR representatives of shepherds’ families from Mongolia came to Slovakia to learn how to produce durable maturing cheese while being helped by Slovak instructors. After their return to their homeland, they will teach more families in their community.

In three to five years, three to ten tons of cheese could be produced in that region, their instructor Anton Drábik told the Sme daily.

“They have enough milk, so why not produce it,” he said, stressing that they have not learned to produce actual Slovak cheese, but rather a similar durable maturing cheese.

One of the shepherds who came to Slovakia to learn cheese-making is Batmunch Tsedev, who decided, at age 54, to change his way of life. Originally, he worked with his family in an agricultural cooperative in Arkhangai Aimag, one of Mongolia’s 21 provinces.


“The socialist agricultural cooperative split-up,” he told Sme. “Since the 1990s, I have been grazing cattle and shepherding.”

Batmunch, along with his wife and son, has been grazing 50 cows, 60 horses and some goats and sheep on the pastures of Arkhangai Aimag. They do not employ anyone, as they do all the work themselves. The shepherding season in Mongolia lasts from May to October. The family milks about 30 litres of milk each day and makes about three kilograms of cheese, Sme wrote.

A Mongolian family earns little. The annual family income is about €150 (Sk4,500) per month. Batmunch's income seems more positive when compared to local prices, as one kilogram of Mongolian beef costs about €1.33 (Sk40) and one litre of milk about 33 euro cents (Sk10).

Mongolians have been making cheese from yak’s milk for centuries. After a partial liberalisation of the market, shops are full of traditional cheeses, and prices keep decreasing. Shepherd families have been forced out of the market by suppliers from Germany, the Netherlands, Russia, and Switzerland.

Slovakia is helping the Mongolians through the Slovak Agency for International Development Cooperation, known as SlovakAid.

“Mongolian shepherds should learn to cooperate. They should give a regional brand to their cheese, and also to other products,” Vlasta Körnerová, head of the non-governmental organisation A-projekt said. “They should be able to produce in their region so that they do not need to move to towns.”

The programme's aim is not only to teach Mongolians how to make cheese, but also how to organise tourism in their home communities and in the country.

They will also receive information about hygiene and bio-processes which form the basis of processing and maturing of cheeses. This will be the topic of a meeting they will have at the University of Veterinary Medicine in Košice, the SITA newswire wrote.

A-projekt received more than €116,000 from SlovakAid for the project. A multi-purpose instruction centre will also be built in Mongolia as part of it so that more shepherds and farmers will be able to learn about Slovak-style cheese production. Sales of the cheese will be managed by a group of local farmers with the support of the main local partner organisation, the YAK society in Ulan Bator, the capital of Mongolia, SITA wrote.