NBS: Slovakia is headed for its first recession

WHAT started as unconfirmed murmurings by the governor of Slovakia’s central bank and the prime minister a week ago is now the official mid-term prediction of the National Bank of Slovakia (NBS): the country’s economy will slide into recession this year, for the first time since independence in 1993. 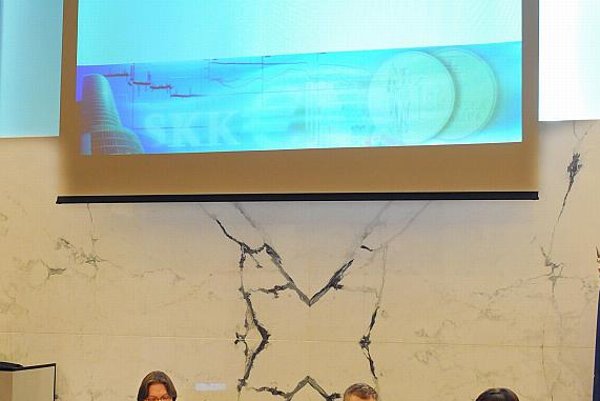 WHAT started as unconfirmed murmurings by the governor of Slovakia’s central bank and the prime minister a week ago is now the official mid-term prediction of the National Bank of Slovakia (NBS): the country’s economy will slide into recession this year, for the first time since independence in 1993.

In revised GDP figures released on April 7, the central bank said that Slovakia’s economy would contract by 2.4 percent in 2009. Its previous estimate had projected growth of 2.1 percent. The bank attributes its 4.5 percentage-point revision entirely to the global economic downturn and says the country’s economy should resume growing in 2010, when GDP is forecast to increase by 2 percent, with growth accelerating to 3.2 percent in 2011.

However, until then job security could be a rather scarce item in the country’s labour market: the NBS predicts that the unemployment will reach 11 or 12 percent.

According to Ševčovic a significant slowdown is evident in both foreign and domestic demand. He also confirmed that the gas crisis, which hit Slovakia in January this year after Russia turned off supplies to Slovakia over what it called a commercial dispute with Ukraine, would contribute 0.5 percentage points to the slowdown.

“In comparison with the December prediction, the impact of the gas crisis is visible too,” Ševčovic said.

As for the NBS’ prediction of a revival in 2010, Ševčovic explained that this was based on the assumption that foreign demand would have resumed by then.

Finance Minister Ján Počiatek said that the revised prognosis by the NBS was realistic. However,
his ministry is still using its own most recent prognosis, which forecasts growth of 2.4 percent in 2009. The reason for this disparity, according to Počiatek, is that his ministry is unable to generate forecasts at a faster pace. However, he said the Finance Ministry would react later, SITA wrote.

Počiatek admitted that the government would have to search for further revenues and savings, but stated that savings should not be at the expense of social programmes.

Počiatek refused to speculate on how the latest numbers would affect the general government deficit but said that the European Commission understands that given the current situation, in which governments are making massive efforts to stimulate their economies, meeting the Maastricht limit for budget deficits – set at 3 percent of GDP - might cause problems for some countries. However, he said Slovakia would not have a problem financing its deficit.

“We are lucky that the sum of our general government debt is in a band where only a few countries are,” said the minister, according to SITA.

It was not so much the revision to the central bank’s growth forecast, but rather its scale, which surprised analysts.

“The NBS governor had already implied last week that the central bank would revise its GDP prognosis downwards, so that was not really surprising. However, the scale has surprised me to a certain degree,” ČSOB bank analyst Silvia Čechovičová told The Slovak Spectator.

According to Čechovičová, the NBS prediction is one of the most pessimistic to have been published so far - but it is in no way unrealistic.

“We consider the prognosis to be slightly conservative; our prediction is somewhat more positive” Tatra Banka analyst Juraj Valachy told The Slovak Spectator. He said that his bank was still forecasting that GDP would grow by 0.8 percent in 2009, and that even if the negative news from the eurozone were to continue, its prognosis would only dip slightly below zero.

Valachy’s bank has a very similar estimate for developments in the labour market, which is for a drop in employment and weak wage growth.

“The difference in our prognosis and the prediction of the NBS is in the size of the impact of the weakening of the EU economy on our GDP,” Valachy said.

However, Valachy admitted that he too had not expected such a large downward revision by the NBS.

“The revision was caused by the continuous bad news from the European Union and - what is even worse - mainly bad news from Slovakia,” Valachy said. “A dip in Slovak industry was expected, considering the negative numbers from the eurozone, but the fall in retail sales in early 2009 and the fast growth of unemployment indicates that our economy will not be so immune to the crisis as it had appeared to be last year.”

Čechovičová agrees that the central bank has merely reacted to the worsening of both the external and internal environment. Data on economic growth for the last quarter of 2008 had already indicated that the economic growth was decelerating steeply, she added.

Mária Valachyová, senior analyst with Slovenská Sporiteľňa, Slovakia’s largest bank, told The Slovak Spectator that her own bank’s forecast was also more optimistic than the new NBS prognosis, but added: “we cannot rule out that our colleagues from Erste Research might revise their estimate for the performance of the eurozone downward from the current -2 percent. In this case we would also revise our estimate for the Slovak economy.”

The situation in the domestic economic environment is not rosy at all, said Čechovičová.

“The unfavourable situation of our largest trade partners – Germany and the Czech Republic – only contributes to the situation,” Čechovičová said. “If we consider the latest prognosis of the European Central Bank, a contraction in the EU economy of 2.7 percent, Slovakia can obviously not be expected to achieve positive growth.”

According to Čechovičová, a fall in demand for Slovakia’s products abroad would result in a negative contribution on the part of net exports and investments.

“The low growth of real wages, the growth of unemployment and the overall worsening of the situation in the labour market will cause a drop in household demand – however, here we still expect a slightly positive contribution,” Čechovičová said.

Čechovičová’s bank is predicting that the Slovak economy will contract by 1.0 percent, but she added that these are times of high uncertainty, which make accurate predictions far more difficult.