GOOD news came from the Spanish city of Seville to the little Slovak town of Levoča on June 28 when a selection committee decided that the town and the stunning works of its famous carver and sculptor, Master Pavol, would be included on UNESCO’s World Heritage List. 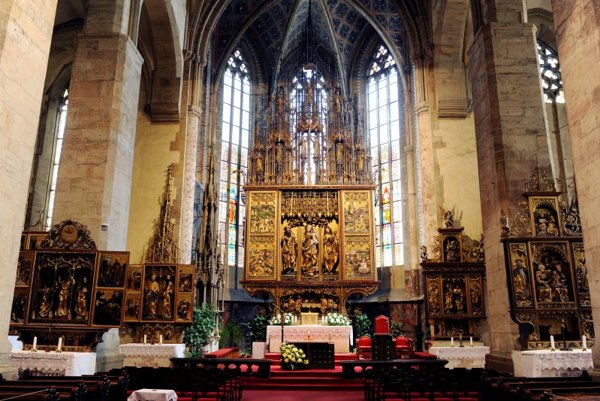 The main altar of the Church of St. Jacob, the highest gothic altar in the world, is made of linden wood without any nails and it's 18.52 metres high. (Source: CTK)
Font size:A-|A+  Comments disabled

GOOD news came from the Spanish city of Seville to the little Slovak town of Levoča on June 28 when a selection committee decided that the town and the stunning works of its famous carver and sculptor, Master Pavol, would be included on UNESCO’s World Heritage List.

Levoča did not get its own separate entry on the UNESCO list. Rather, it was added to a previous 1993 listing for several world heritage sites within the Spiš region: the Spiš Castle and surrounding sites, including Spišská Kapitula, Spišské Podhradie and an early-gothic church in the village of Žehra.

Levoča is a small town of some 15,000 inhabitants in the Prešov region and is part of the Gothic Route. Levoča exemplifies a typical gothic city, surrounded by city walls, with a picturesque historical square dominated by the town hall building and the Church of St. Jacob which, with its 11 altars, is close to paradise for every admirer of gothic art and architecture. The main altar, the highest gothic altar in the world, is made of linden wood without any nails. It is one of the finest examples of the work of Master Pavol from Levoča who is now recognised as one of the most eminent carvers and sculptors during the 15th century in Europe.

The church has been undergoing reconstruction since 1992. The municipal office has been supervising it in cooperation with the local Roman Catholic parish office: the city is responsible for exterior reconstruction and the Church for interior work.

According to Ivan Dunčko, the head of the tourism department of the municipal office, the upper third of the tower has been reconstructed as well as the roof in recent years. The tower also received a new clock. Reconstruction of the northern façade of the church has also been launched.

“The deadline for finishing the reconstruction has not been set yet; everything depends on the financial resources since the renovation of the façade also includes restoration work,” Dunčko told The Slovak Spectator. “We cannot rule out that the work will take another decade because no town has the potential to find financial resources for such a big project at one moment.”

According to Dunčko, reconstruction of the exterior of the church has cost about €1.232 million since 2003 and another €2.5 million will be needed to complete the project. Financing has been provided by the town of Levoča, the Slovak finance and culture ministries, the SPP Foundation and the Prešov self-governing region.

“The interior of the church is waiting for completion of its renovation too,” Dunčko said. “In the past years the church has paid for restoration of the side altars, chapels, the organ and the pulpit.”

As the second biggest gothic church in Slovakia after the Dome of St. Elisabeth in Kosice, the church and the town around it has now joined several other locations in Slovakia listed on the UNESCO World Heritage list: the mining town of Banská Štiavnica; the folk architecture village of Vlkolínec; the spa city of Bardejov; wooden churches in the Carpathians and in East Slovakia; the caves of Slovenský Kras; and the primeval beech forests in the Carpathians.

“It’s the start of a new era for Levoča as it is joining the other cultural sites of Europe and of world heritage,” Dunčko said. “On the other hand, Levoča will be under closer observation, which will require more responsibility when deciding about the town as a whole or about particular objects in it.”

According to Dunčko, the new situation will bring Levoča under closer watch by not only UNESCO but also from Slovakia’s Culture Ministry and National Heritage Office. At the same time, it increases the town’s opportunities to receive additional financial resources for renovation of its sites through various grant schemes. The UNESCO listing has brought satisfaction to all those people who worked for several years to prepare and file the nomination form, Dunčko added.

“Besides, it also brings the pride of belonging to an ‘exclusive club’ of world-wide sites which place protection of heritage first and which are well-worth visiting,” Dunčko said.