The closure of the second unit of the V1 nuclear power station in Jaslovské Bohunice at the end of 2008 was the most important event in the Slovakia’s energy sector of that year. By doing so Slovakia fulfilled commitments from its EU accession treaty by which it had promised to close down the first two units of the outdated Soviet-designed nuclear plant in Jaslovské Bohunice, known as the V1. The closure of the two units has increased pressure on the existing electricity generating facilities to satisfy the demand for power and has forced the country, after years of being self-sufficient in power production, to again import this important commodity. It is expected that Slovakia will depend on imports of electricity until the dominant power producer, Slovenské Elektrárne, places the first of the two new units of the Mochovce nuclear power plant into operation. This is scheduled for 2012. 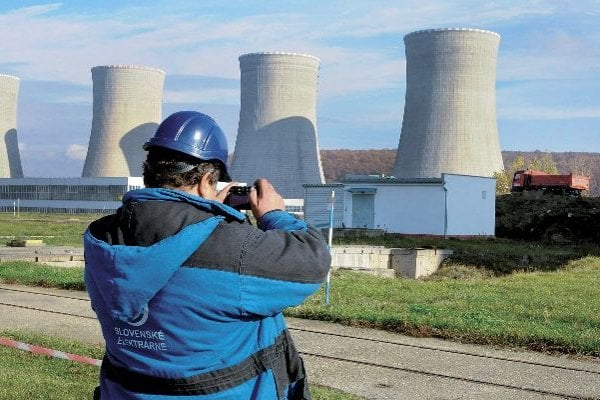 The closure of the second unit of the V1 nuclear power station in Jaslovské Bohunice at the end of 2008 was the most important event in the Slovakia’s energy sector of that year. By doing so Slovakia fulfilled commitments from its EU accession treaty by which it had promised to close down the first two units of the outdated Soviet-designed nuclear plant in Jaslovské Bohunice, known as the V1. The closure of the two units has increased pressure on the existing electricity generating facilities to satisfy the demand for power and has forced the country, after years of being self-sufficient in power production, to again import this important commodity. It is expected that Slovakia will depend on imports of electricity until the dominant power producer, Slovenské Elektrárne, places the first of the two new units of the Mochovce nuclear power plant into operation. This is scheduled for 2012.

To reduce the gap in electricity production and consumption Slovenské Elektrárne (SE) is increasing the output of its existing nuclear power stations. Moreover, Slovakia has adopted new legislation supporting the use of renewable sources of energy and highly efficient methods of producing combined heat and power. Construction of brand new energy facilities, in Malženice and Jaslovské Bohunice, should also increase power production capacities in Slovakia.

In 2008, Slovakia generated a total of 29,309 gigawatt hours (GWh) of electricity while the aggregate consumption was 29,830 GWh. It is expected that the gap between production and consumption will widen from 521 GWh or 1.75 percent of consumption in 2008 to 3,250 GWh or 11.3 percent of the planned consumption in 2009, according to an Economy Ministry document, Monitoring the Security of Electricity Supply, an annual report which the ministry publishes each September. Back in 2006, the year in which Slovakia closed down the first unit of V1, the country was exporting 5.13 percent of the 31,230 GWh of electricity it produced.

“Our energy policy focuses in the long-term on creation of an optimal energy mix with a moderate primacy of nuclear energy,” Vahram Chuguryan, the spokesperson of the Economy Ministry told The Slovak Spectator. “Under Slovakia’s conditions, nuclear power stations are the most reliable elements of energy security, which are irreplaceable also from the viewpoint of the fight against climate changes.”

In line with this concept, Slovakia has started preparations for the brand new nuclear power station project in Jaslovské Bohunice to be built on the premises of the former V1.

The state-owned Nuclear and Decommissioning Company (JAVYS) and the Czech energy company ČEZ agreed in May 2009 upon the launch of a joint venture, whose task will be to build and operate the plant. The state should keep 51 percent ownership in the venture, according to Chuguryan. The construction of the plant is expected to be launched in 2014 and the new nuclear power station should be put into operation in 2020. Its generating capacity will be specified later.

On November 4, the European Commission green lighted creation of the joint venture which is called Jadrová Energetická Spoločnosť Slovenska (JESS) undertaken by JAVYS and ČEZ at Bohunice, making the plan for the new power station more real. The commission concluded that the transaction would not significantly impede effective competition in the European Economic Area or any substantial part of it, the EC wrote on its website.

According to Ján Valko, the chairman of the board of directors and the director general of JAVYS, it will be possible to speak about an estimate of the costs only at the moment when it is more definitively known that a nuclear power station will be built.

According to JAVYS, construction of the new nuclear facility in Jaslovské Bohunice is one of the most significant investments in Slovakia. The construction and its following operation will have a positive influence on employment while the operation of the facility will ensure energy security and strategic security for Slovakia. Moreover, JAVYS stresses, because the Slovak government will be a shareholder of the new company, operation of the new power plant will bring profits and dividends into the state coffers.

While the Jaslovské Bohunice project is still at the beginning of the pipeline, construction works on the 3rd and the 4th nuclear units in Mochovce are continuing in accordance with the plan.

Slovenské Elektrárne, in which the Italian energy giant Enel holds 66 percent ownership, announced its decision to complete the Mochovce nuclear power station, a project with the price tag of €2.775 billion, in February 2007.

The hefty investment required stems from SE’s goals to generate low-cost electricity, free from carbon dioxide emissions, with an adequate portfolio of renewable sources as well as reserve capacity. Once units 3 and 4 are up and running, the Mochovce nuclear power station will cover 45 percent of the domestic power demand, according to SE.

SE obtained a positive assessment from the European Commission in July 2008 and in November that year officially started on-site construction. SE signed contracts with its main suppliers in June 2009 and the construction work has been getting into full swing since then. The assessment of the facility’s impact on the environment should be completed at the end of 2009 or early 2010. Then the application for a licence to put the nuclear facility into operation will follow. SE is determined to complete unit 3 in 2012 and unit 4 in 2013.

Both of the two new units at Mochovce will consist of a modernised VVER V-213 reactor, each with a nominal installed output of 440 MW. Capital expenditures are expected to be €2.775 billion and the company foresees financing €2.2 billion of the costs from its own resources.

Cogeneration unit in Malženice is on track

Completing of the nuclear units in Mochovce and construction of the brand new nuclear power plant in Jaslovské Bohunice are not the only large energy projects in Slovakia. Close to Jaslovské Bohunice, in Malženice, German energy concern E.ON is building a combined-cycle gas turbine cogeneration plant (CCGT) and the project is progressing in line with its plan, the SITA newswire wrote.

E.ON announced the construction of the generating station in March 2007 and construction works were launched in October 2008. SITA wrote in early October that the cost of the project is projected at €400 million.

The commercial operation of the CCGT plant is expected to start at the end of 2010. The installed capacity of the unit will be 430 MW, which is comparable with one block of the nearby nuclear power station in Jaslovské Bohunice.

Its efficiency – at 58 percent – should make the power station one of the most advanced and the most environmentally-friendly in Slovakia.

Its output should cover the electric energy consumption of 600,000 to 900,000 households and will create 35 permanent jobs in the Trnava area.

Even though nuclear energy will remain the main source of electricity in Slovakia, in order to diversify energy resources as well as to meet its commitment towards the European Union to generate 14 percent of the country’s energy needs from renewable sources such as biomass, hydro, wind and solar power by 2020, Slovakia adopted a new law effective from August 2009 to support the use of renewables and highly efficient combined production of heat and power. In 2007, their share of electricity produced was 7.4 percent, according to the Slovak Economy Ministry.

The Economy Ministry, which drafted the law, believes that it provides a comprehensive means of supporting electricity production via highly-efficient co-generation and from renewable energy sources. The law increased from one year to 15 years the period for which guaranteed prices are paid to green energy producers.

“This law optimises the functioning of the electricity market in the segment of renewables and creates a stable economic and administrative environment for their development,” Vahram Chuguryan, spokesperson for the Economy Ministry, told The Slovak Spectator. “In particular, guaranteeing power purchase prices for 15 years represents significant support for construction of facilities producing electricity from renewable sources.”

In late September the Regulatory Office for Network Industries (ÚRSO) set new purchase prices for electric energy generated from renewable sources. But the legislation and the subsequent setting of prices which will be paid to energy producers for green electricity has not met with general approval from all producers of renewable energy. The new law has not pleased the Association for Wind Energy (ZVES). It criticised the provision in the law placing responsibility for deviations in electricity production above 4 MW onto the shoulders of the producer.

“We believe that this is not completely in order, because the law in this way directly attacks the essence of wind energy and its dependence on natural phenomena,” Matej Hlôška, ZVES chairman, told The Slovak Spectator. “We do not understand why somebody requires by law a stable output from wind power stations.”

Energy specialists regard biomass as an important potential energy source in Slovakia.

“Given the conditions in Slovakia, heat production is definitely one area of the energy sector in which use of biomass, originating from either agriculture or forestry, is fully competitive compared to gas,” Karel Hirman, the director of the Energy Policy Section at the Slovak Innovation and Energy Agency, told The Slovak Spectator.

Biomasa, an association supporting the use of biomass in Slovakia, sees increasing use of biomass, but says facilities are being built very chaotically.

“This is because there is no relevant strategy in the regions and the state has neglected to support construction of biomass-fuelled facilities,” Ladislav Židek, Biomasa’s general director told The Slovak Spectator. “Biomass is a fundamentally local source of energy, but the state has not found any system of support so far.”

According to Židek, the state continues to support natural gas and nuclear energy while avoiding use of biomass. Moreover, even in its support for renewables, the state tends to support large investors, he said.

Building of new power generation units is not the only way how to boost power self-sufficiency of Slovakia.

“Energy efficiency is the priority No. 1 for Slovakia as well as the whole world,” Hirman said. “Here Slovakia has very huge reserves and this is where innovative development is taking place.”