ZAHA Hadid Architects, a British architectural design firm launched by the world-renowned architect Zaha Hadid, won an international competition to design the Čulenova project under development in Bratislava by the Penta Investments private equity group. Penta plans to build offices and apartments on a plot of land on Čulenova Street that it acquired in January 2008. The jury selected the firm’s proposed design from over 90 submissions, Penta announced on October 6. 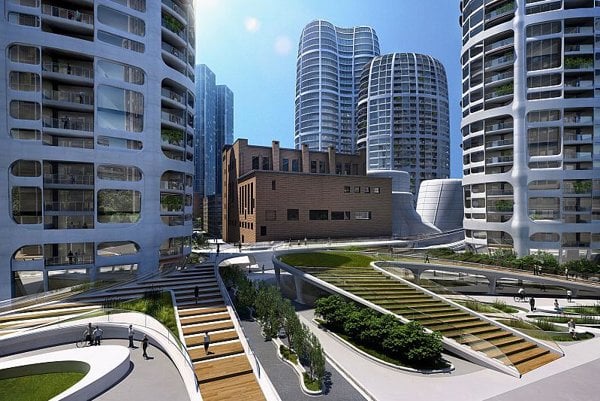 ZAHA Hadid Architects, a British architectural design firm launched by the world-renowned architect Zaha Hadid, won an international competition to design the Čulenova project under development in Bratislava by the Penta Investments private equity group. Penta plans to build offices and apartments on a plot of land on Čulenova Street that it acquired in January 2008. The jury selected the firm’s proposed design from over 90 submissions, Penta announced on October 6.

The winning design for the mixed-used project includes high-rise buildings and reconstruction of a historical industrial building.

“The project of Zaha Hadid was the most comprehensive and the most convincing solution of the tasks and met all the set criteria,” said Štefan Šlachta, the chief architect of Bratislava and head of the jury, as quoted in a Penta press release. “Moreover, this is a project bringing to Bratislava a world-known name and it will get on the pages of the world architectural press.”

The jury, which in addition to Šlachta included Jozef Oravkin, Juraj Šaštinský, Miro Hrušovský, Linda Trembová – all from Penta – and Peter Gero, the head of the Department for City Development and Revitalisation in Hamburg, first chose nine projects from the 90-plus proposals. Then it shortlisted five works for the second round which the jury assessed alongside four projects directly elaborated by requested European architects, meaning that in the end Zaha Hadid Architects was chosen as the best proposal from among nine competing projects in the final round.


“The international competition for the locality of Čulenova and the participation of prominent world-known architects is an example of the way in which developers and the city itself should try to find the best possible architectural concept,” said Miro Hrušovský, the senior architect of the Penta private equity group.

Penta Investments acquired the parcel of land on Čulenova Street in 2008. This is a former industrial zone close to the historic city centre, the new building of the Slovak National Theatre and the Eurovea development. A protected historic building – a turbine hall designed by Dušan Jurkovič, a prominent Slovak architect known as the founder of Slovak modern architecture – sits on part of the land plot. The building will be reconstructed and be used as a modern art gallery or for other commercial purposes, Lea Krčmáriková from Penta Investments informed The Slovak Spectator.

The goal of Penta Investments is to create part of a ‘new city centre’ with the highest quality urban spaces and architecture that will accommodate more than 120,000 square metres of office, residential and retail space as well as cultural facilities.

Penta has not yet announced when construction will begin or its estimated cost. Earlier reports suggested the developer would invest about €300 million and start construction in late 2011 or early 2012.

Penta entered the real estate sector in 2005 by building the Digital Park project in Bratislava. Last year the Prague-based Cigler Marani Architects studio received the prestigious Dušan Jurkovič Award for architecture for the second phase of that project.

Who is Zaha Hadid?

Zaha Hadid, born in Baghdad, Iraq, in 1950, is internationally known for her buildings and theoretical and academic work. Each of her dynamic and innovative projects builds on over 30 years of experimentation and research in the inter-related fields of urbanism, architecture and design. In 2004 she was awarded the Pritzker Architecture Prize and on October 2 this year she won the Stirling Prize, the equivalent of a Nobel Prize in architecture. She received this award for her design of the MAXXI National Museum of XXI Century Arts in Rome.

In spite of the construction boom in recent years, big names in architectural design have mostly avoided Bratislava. The J&T private equity firm promised a world name for design of its recently completed River Park project and Dutch architect Erick van Egeraat created an initial concept. But that concept was mostly finished by Slovak architects and scaled up in size by the developer into the project’s current large size, the Sme daily wrote.