THE GRAND re-opening of the Radnička café at its original location in Bratislava’s Old Town Hall was held on April 21. The café is a protected workplace, meaning that six of its eight employees have some type of disability. 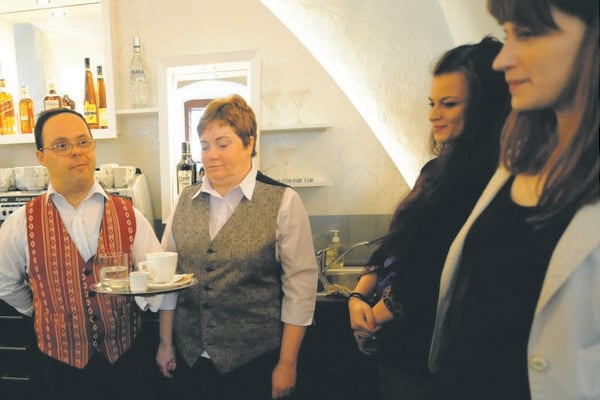 THE GRAND re-opening of the Radnička café at its original location in Bratislava’s Old Town Hall was held on April 21. The café is a protected workplace, meaning that six of its eight employees have some type of disability.

“Bratislava residents were used to coming to the café for nine years between 2001 and 2009 and then it was closed due to reconstruction of the Old Town Hall. The representatives [of Bratislava] unanimously approved the re-opening of the café and this shows that the city wants to help our disabled citizens,” said Milan Ftáčnik, the mayor of Bratislava, at the opening ceremony, as quoted by the TASR newswire.

The mayor of Bratislava’s Old Town district, Tatiana Rosová, as well as Mária Demeterová, a former vice-mayor who is known as the godmother of the café because she initiated the protected workplace, also attended the gala event.

The Radnička café has a capacity of 28 seats and is open daily except Mondays, just like the City Museum also housed in Old Town Hall; the two also share the same opening hours. Viera Záhorcová of the Inklúzia civic association, which operates the café, noted that the shared hours are a pity because the café could easily stay open longer than just 17:00 on weekdays and Saturdays, and 18:00 on Sundays.

In addition to various kinds of food and drink, the café also displays and sells various hand-made products produced by disabled people in Bratislava, Handlová and Vranov nad Topľou. Six of the waiters working at Radnička have some kind of disability. The five waiters who originally worked at the café before it closed have all found other jobs and three of them are even working at a fast-food restaurant that is not a protected workplace. Záhorcová said the long-term goal of her association is to place people with disabilities into the regular labour market.

Radnička also re-initiated its Obslúži vás (You will be served by…) programme that invites celebrities to prepare their secret recipes and delicacies and offer them at the cafe.

The Radnička café re-opened briefly in September 2011 but sanitary problems and technological flaws were discovered. It took until April this year for these to be resolved and the café to receive the necessary permits.