MILAN Juhász, a 51-year-old policeman, did not go to work on Saturday, June 16. Instead, he took an illegally-held gun and headed to Komárňanská Street in Hurbanovo, a small town in southern Slovakia. There he stopped in front of the house of a large Roma family and proceeded to shoot dead a 44-year-old man, his 19-year-old son and 24-year-old son-in-law, as well as shooting in the chest the 44-year-old victim’s second son and also wounding the son’s wife. The police detained Juhász, who was by then threatening to commit suicide, shortly after the killings. According to human rights activists, the event could affect relations between the Roma minority and the non-Roma majority in Slovakia. 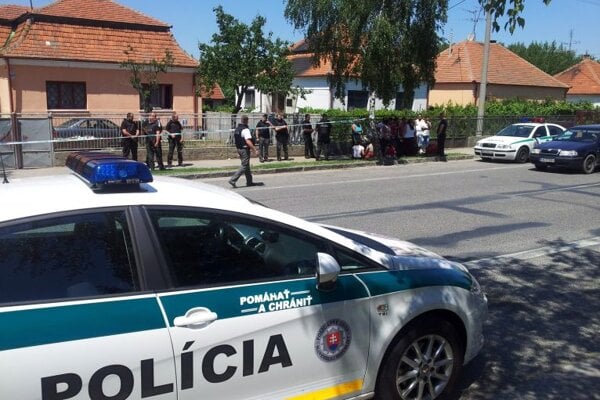 The motive for the shooting that killed three persons in Hurbanovo is not yet known. (Source: TASR)
Font size:A-|A+  Comments disabled

MILAN Juhász, a 51-year-old policeman, did not go to work on Saturday, June 16. Instead, he took an illegally-held gun and headed to Komárňanská Street in Hurbanovo, a small town in southern Slovakia. There he stopped in front of the house of a large Roma family and proceeded to shoot dead a 44-year-old man, his 19-year-old son and 24-year-old son-in-law, as well as shooting in the chest the 44-year-old victim’s second son and also wounding the son’s wife. The police detained Juhász, who was by then threatening to commit suicide, shortly after the killings. According to human rights activists, the event could affect relations between the Roma minority and the non-Roma majority in Slovakia.

“Not just the shooting itself, but all the factors which accompany this case could impact [relations],” Irena Bihariová, the head of human rights watchdog People Against Racism, told The Slovak Spectator. “I am referring to the responses of the public, when [online] public discussions turned into mass glorifications of the murderer and hateful responses towards the victims, and the overall tone of the public discourse, which styles the offender as a hero and the victims as the guilty [parties].”

Laco Oravec, a programme director from the Milan Šimečka Foundation, agreed that the case had unleashed some ugly emotions and tended to reinforce some popular myths.

“Every such tense situation or conflict very much elevates sentiments and emotions as though bringing out all the context from the mental memory of the society and thus it is not about the particular cases but rather the society being guided by such through images which then define relations between Roma and non-Roma,” Oravec told The Slovak Spectator.

The Office of the Special Prosecutor has charged Juhász with premeditated murder, violation of the sanctity of a home and carrying a concealed weapon, police spokesman Michal Slivka told the TASR newswire on June 18. If found guilty, Juhász could face 25 years to life in prison, Slivka added, but he refused to provide any other details, citing the ongoing investigation.

A momentary lapse of reason fuelled by professional frustration could have prompted Juhász to kill, the Sme daily speculated, citing sources close to the investigation.

The police are reportedly working on the theory that Juhász was unable to handle problems related to a group of citizens in the small town where he worked as a municipal policeman, and thus took matters into his own hands, the daily reported on June 23.

This version is, according to Sme, supported by the sole explanation the murderer offered when brought before a judge: “I woke up in the morning with the thought that I have to restore order around them.”

The police earlier said that the shooting was probably not racially motivated. They argued that if it had been, the man would have killed even more people, Sme reported on June 18.

Juhász reportedly knew the residents of Komárňanska Street, where two Roma families live in neighbouring houses. Interior Minister Robert Kaliňák said the man had visited the houses as part of his police duties. Four of the five victims of the shooting had criminal records, according to Kaliňák.

The victims will be buried in Hurbanovo on Friday, June 29. State police have been patrolling the town and the municipal force is expected to return to the streets only after the funeral.

Some media outlets decided to disable and delete online public comments under their stories about the Hurbanovo shooting after commenters posted a large number of offensive comments about the victims. Bihariová suggested that one reason behind such attitudes among the public is the unresolved situation with socially-excluded communities, and said this shows that the government must make the issue a top priority, rather than just procrastinating and playing it down as it normally does.

“People are frustrated, so they go to vent to places where they can hide behind their anonymity,” said Bihariová, who added that people who comment on such websites do not have any deep knowledge of the issue and assume that the reason for the current situation is a lack of repressive policies. “They are not aware that if this is how they formulate the ‘public demand’ then the politicians will cheer them in a populist manner and real solutions will be set aside.”

According to Bihariová, the “disagreeing minority” have become exhausted in such debates, which legitimise hate speech. If no one opposes or no one enters this discussion it strengthens the homogeneity of the debating ‘haters’ and encourages them to believe “that such hateful attitudes … are appropriate and normal”.

Oravec said that the tone of readers’ comments is nothing new and that the quality of internet debate and persistence of anti-Roma attitudes are a long-term problem.

“One must say that yes, hate and a sort of [action] – even very physical or fatal attacks against Roma – are not rare and appear not only on internet forums,” Oravec said. “It means that there is such a trend in society and that many are really able to formulate almost extreme, even radical images, and it is really not for the first time that there appear proposals for deportation, reservations or even extermination.”

Klára Orgovánová from the Roma Institute, Jarmila Lajčáková from the Centre for the Research of Ethnicity and Culture, and František Kutlík from the Slovak Institute for Mediation, sent an open letter to President Ivan Gašparovič, Prime Minister Robert Fico, parliament and other state authorities in which they ask that the shooting be fully and properly investigated. They also call for a stop to repressive, anti-Roma measures and passing of proactive measures to eliminate growing intolerance toward Roma residents in Slovakia, SITA wrote on June 17.

“Surveys have been warning against deep-rooted prejudices and hate towards members of the Roma minority for a long time,” states the open letter, as quoted by SITA, adding that a survey conducted in 2010 showed that up to two-thirds of respondents openly supported discriminatory actions against Roma citizens.

The letter’s signatories also warned that the shooting in Hurbanovo shows that this trend is continuing, writing that “regarding the growing intolerance towards Roma it is no surprise that the popularity of right-wing extremist movements, as well as individual deeds aimed against Roma, is going up”.

Bihariová interprets this letter as an appeal to society, led by politicians, to become aware of how dangerous such discourse is and that shooting people, regardless of the motivation, is simply nonsense and should be perceived as such, regardless of the profile of the offenders and the victims. According to her, the letter calls for the problem of socially-excluded communities not to be used to justify such acts and for the situation to be resolved via legal, rational and pro-integration measures.

Oravec notes that this is not the first appeal to be addressed to the government. But he expressed doubt about the effectiveness of such calls.

“It must be said that the voice, the minority voice, which calls for a different quality of relations, some kind of reflection and change to these inter-ethnic relations, is really almost unseen, unheard and it does not meet any open ear,” said Oravec, adding that the government too often ignores this voice.

According to Bihariová, it is symptomatic that no politician or public authority has rejected this tone of discourse and expressed at least an elementary solidarity with the victims.
“These are issues the Roma are aware of and neither the shooting nor these attitudes of the public help mutual relations,” Bihariová said.

Several media have compared the Hurbanovo shooting with the shooting spree in Devínska Nová Ves on August 30, 2010, in which Ľubomír Harman killed several members of one Roma family, injured several other people in the street and later committed suicide as the police were attempting to detain him.
But while Harman continued shooting randomly after his initial assault, Juhász fired only at residents of one house.

Bihariová sees one similarity in the case: “I had a feeling that in both cases on the part of some media, but also the wider public, evidence was sought to ease the gravity of the offenders’ act while moving him to the position of tortured martyr while, on the contrary, evidence was sought of the victims’ ‘problematic nature’.”

She noted that in both cases the police have not found any clear motive, and that in the case of the Devínska Nová Ves shooting the ‘problematic neighbours’ explanation has not been proven.