HAVE you ever tasted Hron, or Devín? This is not an invitation to drink from the waters of the Hron River, or to gnaw on the rock of Devín Castle. Instead, the question refers to two varieties of Slovak grape cultivated to exploit the full potential of Slovakia’s climate and soil and produce wines which cannot be made anywhere else. 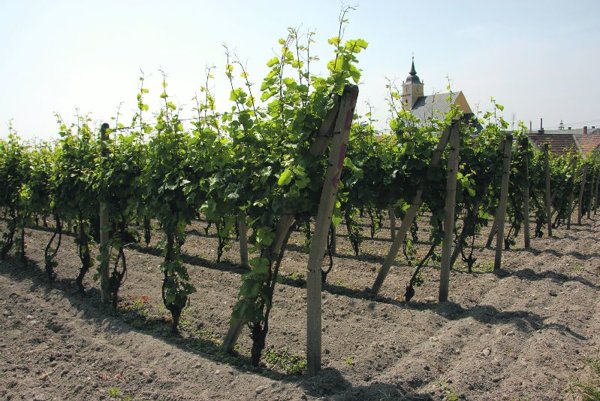 HAVE you ever tasted Hron, or Devín? This is not an invitation to drink from the waters of the Hron River, or to gnaw on the rock of Devín Castle. Instead, the question refers to two varieties of Slovak grape cultivated to exploit the full potential of Slovakia’s climate and soil and produce wines which cannot be made anywhere else.

“Slovakia is not only a country with an astonishing diversity of natural conditions, but it has given the world a whole range of new varieties, which are as diverse and marvellous as this country,” Ľudmila Miškovičová from the Slovak National Collection of Wine told The Slovak Spectator.

“But the list of registered varieties keeps being extended by new cultivars, either white or blue or table, which were cultivated to be grown under Slovakia’s conditions,” said Miškovičová. “Last year two white and seven blue varieties for wine production were added to the list.”

Devín and Dunaj are the most popular Slovak grape varieties amongst Slovak winegrowers.

“These two varieties occur in the portfolio of almost every Slovak winemaker,” said Miškovičová, who estimates that in total Slovak grape varieties make up about 3 percent of the area cultivated as vineyards in Slovakia, but that the use of Slovak varieties has been growing significantly in recent years.

Jaroslava Kaňuchová Pátková, executive director of the Slovak Association of Producers of Grapes and Wine, explained to The Slovak Spectator that the advantage and objective of the cultivation of new varieties is the creation of new varieties suitable for growing in Slovak conditions. These advantages are: a better adaptability to the climatic and soil conditions of Slovakia, lower morbidity, a reduced need for crop spraying, and originality of varieties. Among the disadvantages she listed is the long period needed to determine the best technology for processing the grapes of individual varieties – normally at least 10 years.

Miškovičová specified that the white Devín grape, a cross between the Tramín červený (Gewürztraminer) and Veltlínske červenobiele varieties, produces a green- yellow wine with a moderate spicy aroma, leaning towards Muscat. This variety, crossed by Dorota Pospíšilová and Ondrej Korpás in 1958 in the Wine Research Institute in Bratislava, produces dry wines as well as naturally sweet wines.

“They enthral with spiciness, fullness and perfect harmony,” Miškovičová said, adding that Devín, within its aroma and taste, conceals hints of dried apricot, dandelion honey and bread.

The Dunaj variety was created by Pospíšilová in 1958, when she first crossed Muškát Bouchet with Oporto and then with Svätovavrinecké (St. Laurent). With its early ripening it is a very suitable variety for Slovak climatic conditions. It also has good resistance to frost.

Miškovičová describes the red Dunaj wine as being as robust as the river after which it is named.

“Europe got an original wine of the southern type from its most northern vineyard range. The best Dunaj is born near the Danube River,” said Miškovičová, adding that this warmest part of southern Slovakia gives, during the best periods, naturally sweet wines. “Dunaj is a beautiful Slovak contribution, enriching the repertoire of traditional European red wines. It is an example of the originality of the terroir, its inimitable climatic conditions and the ability of its people to create great wine.”

The story of Devín as well as Dunaj demonstrates the endurance required for the crossing and cultivation of grape varieties. It took more than 30 years until the varieties were inscribed in the official register of grape varieties, in 1997. According to Miškovičová, other new Slovak varieties have not been in the official register for long enough and their potential will be demonstrated after 10 years at the earliest, once winemakers learn to work with them.

The experiences of winemakers

The collection of the best wines from 2012 presented by the Slovak National Collection of Wine in Pezinok offers seven Devín white wines, while the red wines feature six Dunaj wines. The 100 wines in the collection are drawn from the winners of annual nationwide competitions.

Two wines from Chateau Modra, a winery in western Slovakia which boasts 400 years of tradition, are represented in the white as well as red wine categories of the national collection: a Devín 2011, in the semi-dry grape selection; and a Dunaj 2009, in the dry berries selection. But many more Slovak varieties can be found in its vineyards.

“Our winery produces wine from the Devín, Dunaj, Nitria and Hron grape varieties which we grow in our vineyards in Strekov,” Karol Šebo, the owner of Chateau Modra, told The Slovak Spectator, adding that they also grow, in small amounts, varieties like Milia, Noria and Váh.

Šebo explained that since these Slovak varieties have been cultivated for Slovakia’s specific soil and climatic conditions, they believe that they have great potential here.

“In the case of Devín we can speak about a very nice aromatic wine, while in the case of red wines it is possible to highlight robust body and high potential for maturing,” said Šebo.

The Karpatská Perla winery, in Šenkvice near Modra, grows Devín in its biggest vineyard, Suchý Vrch.

“We planted it [Devín] for several reasons,” Kristína Šebová of Karpatská Perla told The Slovak Spectator. “We wanted to plant varieties which are typical for our region and which would also be interesting abroad. Moreover, we had at our disposal quality plants.”

Šebová specified that one of the main positive features of this variety is that it is able to achieve a high sugar content even during unfavourable years. Its grapes accumulate sugar and are able to support cibébas, i.e. botrytised grapes. Because of this characteristic it is suitable for production of naturally sweet wines.

Currently, Karpatská Perla has one representative in the wine collection for 2012: a Devín 2011, in the dry grape selection.

“The disadvantage in the case of some varieties is the fact that they are not officially registered,” Šebová said. “Another disadvantage might be that they are completely unknown, which on the other hand can [be a] great advantage: most visitors from abroad want to taste original local varieties. People abroad like to taste new wines, discover new varieties and get to know new tastes.”

Modra-based Fedor Malík Jr, the son of a Slovak wine expert and a wine producer himself, grows the Hron variety, a blue grape variety which gives full, dark, premium wine with long ageing.

“The advantages of growing new varieties and then producing wines brings not only marketing advantages, but primarily enrich the existing sensorial repertoire of Slovakia,” Malík told The Slovak Spectator.

Šebová believes that the aim of cultivation and crossing of new varieties should also make Slovakia more visible as a wine-producing country.

“Slovakia has ideal conditions for growing white varieties, but also some blue ones,” Šebová said. “However, only a few people abroad suspect what potential for viticulture and wine production we have here.”

According to Miškovičová, cultivation and growing of new varieties is the way Slovak vintners and wine producers should go.

“Cultivation of Slovak grape varieties is the way in which Slovakia certainly has to go because among a more extensive assortment of world wines Slovak winemakers can attract attention only by originality and non-traditionality,” said Miškovičová. “Locally cultivated varieties certainly offer this.”