JEAN Rony Cadot, an American basketball player of Bahamian origin who currently plays for a Slovak club, was seriously assaulted in front of a nightclub in Nitra on February 14, reportedly by a group of six people. He had to undergo eye surgery as a result of the attack. Slovak basketball officials as well as an anti-racism group have condemned the incident, while Slovak police have charged two men and are investigating the motive for the attack. 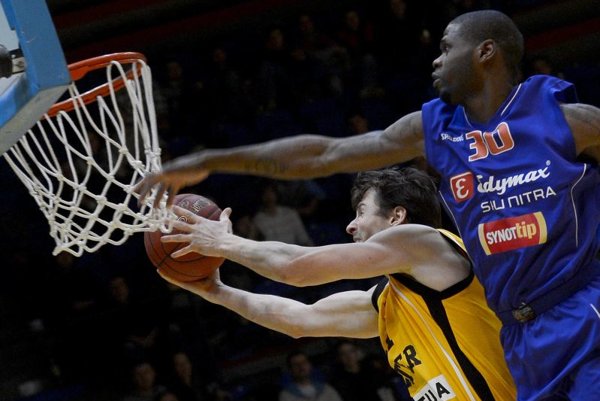 JEAN Rony Cadot, an American basketball player of Bahamian origin who currently plays for a Slovak club, was seriously assaulted in front of a nightclub in Nitra on February 14, reportedly by a group of six people. He had to undergo eye surgery as a result of the attack. Slovak basketball officials as well as an anti-racism group have condemned the incident, while Slovak police have charged two men and are investigating the motive for the attack.

Cadot, 25, a player for the Edymax SPU club in Nitra, was, according to a report in the Sme daily on February 23, pursued by his attackers to hospital and en route subjected to a stream of racist abuse.

Cadot spoke out more than a week after the incident saying that his attackers were openly racist, Sme reported. Cadot said the word “nigger” was used, while another basketball player who witnessed the incident, which took place in front of Devil’s Pub, a nightclub in Nitra, confirmed the events had occurred as described by the victim, Sme reported.

Nitra Regional Police spokeswoman Renáta Čuháková confirmed to The Slovak Spectator on February 27 that two suspects had been charged with causing bodily harm and rowdiness. Čuháková explained that racial hatred was one of several possible motives defined by the law.

“We are still investigating what the motive was,” Čuháková added.

The men charged by police, 21-year-olds Mário U. and Adam D. from Nitra, do not have any criminal record, the SITA newswire reported.

The attack, according to eyewitnesses, followed a quarrel inside the nightclub; bouncers ejected the quarrelling groups into the street. Cadot, who was among the first to leave the club, was reportedly attacked by six people. Video cameras located in the pub did not record the incident: owner Rastislav Solár stated that the fight started “in a blind spot of the cameras”, Sme reported.
The deputy director of the teaching hospital in Nitra confirmed that two of the alleged attackers followed the basketball player to the hallway of the hospital’s emergency room.

Stanislav Michalík, president of the basketball club, said on February 22 that it was regrettable that such an attack could take place in the 21st century, and rejected any suggestion that the fight may have been provoked by the basketball players, Sme wrote.

While Sme reported that the police investigator concluded that it was a racially motivated crime, SITA reported that an alternative theory was being considered: that it was a pub fight provoked by Cadot himself, and that racism was not a motivating factor. The whole of the police anti-extremism department in Nitra is working on the case, national police chief Tibor Gašpar said.

Irena Bihariová from the NGO People Against Racism (ĽPR) suggested that racist incidents are “happening in the regions often without the wider public learning about them, with the victims avoiding the attackers in the future as they do not want to become a target of aggression again if they take legal steps or publicly condemn the act”.

Last year the victims of three similar incidents reported their cases to ĽPR. All three incidents happened in Bratislava and the offenders were identified as right-wing extremists associated with groups of football supporters, Bihariová said.

Alexander Farkašovský, the head of the supervisory board of the Slovak Basketball Association, condemned the attack on Cadot, saying that it was a shameful and barbaric act. Farkašovský dealt with the fallout from a racist attack involving another foreign basketball player in Slovakia in 2008, when two men attacked Denise Wilson, an African-American playing for Cassovia Košice.

Wilson, who was going to meet a friend in the city centre, was harassed at a tram stop by two men with shaved heads and wearing camouflage-style clothes. As she tried to explain that she did not speak Slovak, they subjected her to extreme racial abuse and told her to “go home”. She tried to escape but the men chased her from Osloboditeľov Square to a McDonald’s in Protifašistických Bojovníkov Street, swearing at her and threatening her. At the restaurant she was forced to shield herself with a chair as customers looked on without offering to help her. The men were finally ejected from the restaurant by its manager, Sme reported on April 8, 2008.

“I do not want to change my opinion of Slovakia,” Wilson told Sme shortly after the incident, adding that she still liked it and that the country itself had not done anything to harm her. “However, what happened forces me to think more. I want to go after what happened, I want to be with people whom I love.”

Though Wilson returned to Košice two years after the incident, she left for good a month later, Sme reported on February 22, 2013.

Bihariová said that, while she views the case with a sense of utter shame and feels deeply sorry for the victim, she is not certain whether such cases are recognised as a warning sign by the public in Slovakia.

To illustrate her point, Bihariová cited a recent incident in which a cyclist was allegedly attacked by members of the Roma minority during a training ride. This prompted “internet anger and fiery, muscular debates, while we at the ĽPR received dozens of angry e-mails. Of course it was a condemnable act”, she said, adding that although she did not object to the reactions, many crossed the line of decency. The paradox, according to Bihariová, is that a couple of months later, there was an incident in which the roles were reversed and the victim came from a racial minority and the culprits were ethnic Slovaks, and the response of the public in internet discussions was both muted and only mildly critical.

Bihariová said that this case illustrates the public’s sensitivity to such issues and the fact that if an act is committed by Roma, it evokes “huge emotions” but if the offenders are from the majority and the victim is a member of an ethnic or racial minority, for many it is “not worth getting righteously angry about”.

Bihariová said that while open expressions of racial hatred are not as visible as they were 10 or 15 years ago, today extremists are promoting their agenda covertly while styling themselves as saviours of the “oppressed” majority.

According to Bihariová, extremists today are using mostly legal democratic tools, albeit with the aim of weakening democracy.