EVERY year works by Slovak artists who have established themselves abroad are exhibited in Bratislava. As part of the Henkel Slovensko Slovensku project, the 14th such exhibition has opened in the Bratislava City Gallery (GMB), this time presenting the works of Jozef Bajus, titled Long Distance Calls. 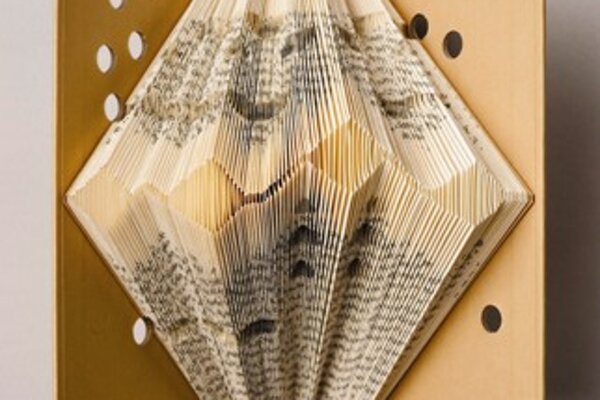 EVERY year works by Slovak artists who have established themselves abroad are exhibited in Bratislava. As part of the Henkel Slovensko Slovensku project, the 14th such exhibition has opened in the Bratislava City Gallery (GMB), this time presenting the works of Jozef Bajus, titled Long Distance Calls.

The title symbolises the communication between the artist and his father, but also encompasses themes and issues that transcend the borders of the US, where Bajus currently lives and works, to touch on the environment, the relationship between humans and the planet, mass production and pollution.

“Jozef Bajus uses books as artistic material, semi-finished products that he destroys, bores and cuts, and creates new small plastic artworks,” curator and author of the accompanying monograph, Ivan Jančár, stated in a press release. “He changes old, abandoned and useless books into new artworks, concealing their titles and turning them into something anonymous.”

Bajus graduated from the Academy of Fine Arts in Bratislava in 1985 and after finding success on the international scene, he gradually moved his work to the US, where he is now a visiting professor at New York’s Buffalo State College.

The current exhibition includes the Composition 1-9 work from 1988. “With it, I won the first prize at the Textile Triennial in Budapest and this opened the doors of the world for me,” Bajus said, as quoted by the TASR newswire.

For his works he uses different techniques. As for the themes, Bajus said: “On top of the already mentioned themes, the exhibition also features socio-political themes of oppression and human suffering. Behind every war conflict there are, first of all, innocent people: refugees seeking in despair a hideout from injustice. Part of the exhibition is marked by my own fate: by the loss of my beloved wife and other dear ones, which has had a profound effect on me, and at this time I am still trying to recover from the loss. An art dialogue with my father is also a theme of the exhibition which still continues, and I consider it a long distance conversation.”

The exhibition, open Tuesday through Sunday between 11:00 and 18:00, will last until January 19, while the accompanying book will be available also later. More information can be found at gmb.sk.