THE PRE-CHRISTMAS period this year in Slovakia has seen growing tension between gay rights activists and supporters of 'traditional family'. This was especially due to a letter the Catholic bishops of Slovakia wrote to their followers on December 1. The controversy arose after the pastoral letter was read aloud in all Slovak Catholic churches on the first Sunday of the Advent season, December 1, which was broadcast by local media and through the internet. 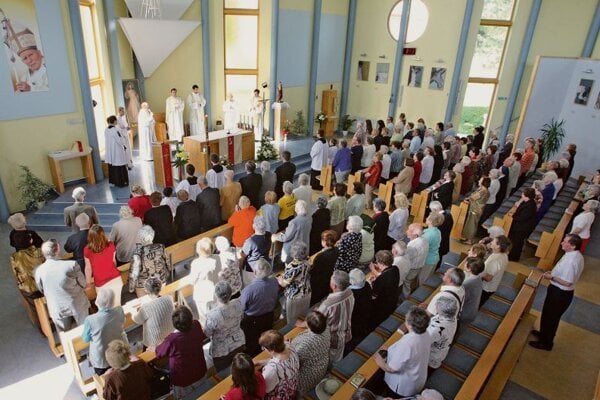 THE PRE-CHRISTMAS period this year in Slovakia has seen growing tension between gay rights activists and supporters of 'traditional family'. This was especially due to a letter the Catholic bishops of Slovakia wrote to their followers on December 1. The controversy arose after the pastoral letter was read aloud in all Slovak Catholic churches on the first Sunday of the Advent season, December 1, which was broadcast by local media and through the internet.

What the bishops said

The bishops associated with the Conference of Bishops of Slovakia (KBS) caused outrage among their opponents, but also among some of their followers, mainly with the language they used to describe what they see as a threat to the institution of traditional family in Europe.

They repeatedly labelled gender equality efforts as “the culture of death” and same-sex marriages as “sodomitic mockery”.

In their letter, Slovak bishops note that the institution of family in the traditional sense might not survive in Europe.

“Even though a man cannot destroy it, he can cripple it, and this is what is happening in the world nowadays,” the letter reads, going on to charge that proponents of the “culture of death” use very sophisticated methods by inserting brand new and disparaging content into noble terms. The bishops slammed “gender ideology” and “the so-called gender equality”, which they say is not about granting equal rights to men and women, but is instead aimed at “persuading us that none of us exists by nature as a man or as a woman”.

The Slovak bishops state that the highest representatives of many countries give in to this “culture of death” by passing laws that “sometimes contrast with common sense”, and some signs of this can be seen among Slovak politicians too.

“Activists of ‘gender equality’ do not give up, but they wait for their opportunity so that through legislation they can rule over the educational process and force this ‘sodomitic ideology’ into school and pre-school education,” the letter reads.

Finally, the bishops warn believers against the media, which they say “strongly supports” the culture of death, too.

The letter raised many eyebrows even among Slovakia’s Catholics, and sent waves of discontent and anger through liberal circles.

There have been various reactions among believers regarding the letter, Imrich Gazda of the Catholic University in Ružomberok’s journalism school said: some appreciated the letter, saying that the bishops’ words matched their own opinions, while others criticised the tone of the letter and questioned the letter’s comprehensibility and timing for the start of Advent.

Most of the reactions that the KBS received were positive, KBS spokesperson Jozef Kováčik claimed. As for the negative reactions, he cited the former spokesperson of John Paul II, who said that “when the media started writing about our message negatively, we knew that our message had reached the places it should have reached”.

LGBTI and others outraged

The Inakosť Initiative, one of the major organisations advocating the rights of LGBTI people in Slovakia, noted in its official statement that unfortunately conflicts between religion and universal human rights are not rare.

Gender equality is a legitimate political aim, similar to increasing employment or decreasing the number of car accidents, according to Macko.

“The bishops did not present a single substantial argument about the harmfulness of gender equality, and that makes the tone of the letter, which resembles a declaration of war rather than preparation for the holidays of peace, incomprehensible,” Macko wrote. He considers the statements in the letter a clear message for Robert Fico or any other candidate that Smer might put forward for the presidential elections, that if the government does not promote the pro-life political agenda, the Church will stand up against their candidate.

“We haven’t seen such an attack on a certain group of people from the part of the representative of the Catholic Church since the wartime Slovak state, and it is in direct conflict with the attitudes of the new Pope,” Macko wrote.

Human rights watchdogs went even further with their reaction to the pastoral letter when on December 5 they sent a joint open letter to Foreign Minister Miroslav Lajčák, who also heads the government’s Human Rights Council. In the letter, they declined the invitation to the Christmas Gala Concert organised by the ministry.

Representatives of NGOs advocating human rights who are also members of the Council listed several reasons for refusing to attend the concert, among them their view that the universality of human rights has been questioned repeatedly in the public discourse in Slovakia.

“Although we have tried to clarify and explain basic human rights principles, mainly in the area of gender equality and LGBTI rights, instead of easing the tension in society, we are facing a situation where some of us are exposed to personal attacks and blackmail,” the open letter reads.

The activists say they expected Church leaders to distance themselves from divisive terms like “the culture of death” or “sodomitic mockery”, but they did exactly the opposite in their pastoral letter. The NGOs refuse to attend the concert, which will open with a speech by the Papal Nuncio, Mario Giordana. They believe it to be a sign that the government is giving in to the pressure of the Catholic Church “and tolerates its attacks on people championing universal human rights in Slovakia”.

Pastoral letters are widely used among Slovak bishops as a tool to communicate with their clergy and congregations. Slovak bishops gathered in the KBS often send joint pastoral letters, which are then read out loud to church goers during the Sunday mass sermon in all Slovak churches.

“It might not seem so from the outside, but within the Church pastoral letters still have weight,” Gazda told The Slovak Spectator. “Maybe not as much as they had some years ago, but a portion of the believers is still responsive to the voice of the bishops and takes their attitudes to their heart.”
A pastoral letter is used regularly, depending on the bishops’ needs to communicate some issues to their believers, Kováčik explained.

To start the time of Advent, which is a four-week long preparation for Christmas in the Catholic calendar, Slovak bishops felt they needed to focus the believers’ attention on what they call traditional family.

“Advent is a preparation for the celebration of the birth of the Son of God, therefore it is important to consider real respect to life from natural conception until natural death,” Kováčik told The Slovak Spectator.

The bishops’ statements have not simply come out of nowhere. The KBS issued a statement on July 4 regarding gender ideology.

“Now they repeated their stance in the pastoral letter, which means they consider the topic important,” Gazda said, adding that the tone of the letter clearly suggests the bishops will not refrain from strong statements on these issues in the future too.

Several observers have pointed out the contrast between the confrontational tone used by the Slovak bishops and the rhetoric that Pope Francis uses in his public statements, most recently in his first major document, which outlines the goals for his pontificate, the Evangelii Gaudium (The Joy of the Gospel).

“Neither the Holy Father nor the Slovak bishops intend to change the basic religious truths,” Matúš Demko from the postoy.sk news portal told the Sme daily. “The main difference between them however is that while the Pope sends positive signals and encouraging words, the Catholic Church in Slovakia mainly scolds and punishes.”

In the Evangelii Gaudium, Pope Francis also criticises those within the church who foster division to the point of “veritable witch hunts”, and advocates opening doors, the New York Times reported.