Ukraine: a challenge for Slovakia

AMONG Slovakia’s neighbours, Ukraine is the only one that is not a member of the European Union, and recent events which saw hundreds of thousands of Ukrainians pour out into the streets and squares of Kiev and other cities suggest this is unlikely to change in the near future. As such, observers say Ukraine should definitely be Slovakia’s number one foreign policy priority. 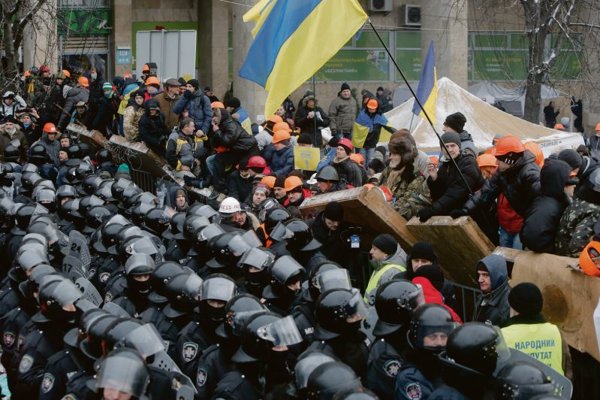 AMONG Slovakia’s neighbours, Ukraine is the only one that is not a member of the European Union, and recent events which saw hundreds of thousands of Ukrainians pour out into the streets and squares of Kiev and other cities suggest this is unlikely to change in the near future. As such, observers say Ukraine should definitely be Slovakia’s number one foreign policy priority.

Since late November pro-EU Ukrainians have been protesting in the streets of the country’s cities, spurred by President Viktor Yanukovich’s last minute decision not to sign the association agreement with the EU. Yanukovich was originally supposed to sign the association agreement at the summit in the Lithuanian capital of Vilnius, but after reconsidering, he suspended the association talks on behalf of Ukraine. Observers see pressure from Russia behind his decision, and have warned of the possibility of Ukraine orienting itself to the east rather than toward the EU.

The protesters, who according to the Reuters newswire range from liberals to far-right nationalists, say Yanukovich and his government must resign.

Fico: EU is no religion

Slovak Prime Minister Robert Fico did not comment on the events in Ukraine until December 3, when he said that the EU is “so in love with itself” that it is convinced there is no better alternative to it in the world, SITA reported.

EU membership is not a religious rule for countries and each country can freely decide whether or not it will join, Fico said, adding that one must look at the offers that have been put in place, such as the lowering of gas prices or projects offered to Ukraine.

“Ukraine simply decided to go another way and I will not judge it now, it is an internal affair [of Ukraine],” Fico said.

He said he was sorry that the decision was accompanied by violence and demonstrations.

President Ivan Gašparovič, speaking after the Vilnius summit, which was originally intended for the signing of the association agreement between Ukraine and the EU, said there was “a certain disappointment, because quite a lot has been invested into Ukraine politically”.

When Ukraine refused to sign the accession agreement, Slovakia’s Foreign Minister Miroslav Lajčák admitted it surprised and disappointed him.

“But we respect it as a decision of a sovereign state,” the Foreign Ministry wrote in its official statement, adding that the doors remain open to Ukraine.

Minister Lajčák, who travelled to Kiev amid the protests to attend the Council of Ministers of the Organisation for Security and Cooperation in Europe (OSCE), deemed it a mistake for foreign politicians to take sides in the conflict in Ukraine.

“We have to support and defend democratic principles and processes,” he said, as quoted by the TASR newswire. “[We have to] support dialogue and communication. Our task is not to take sides of one of the stakeholders in the internal politics in Ukraine. That is to be decided by Ukrainian citizens, but it is important for them to have room to make a democratic decision.”

During his visit to Kiev in early December Lajčák met his Ukrainian counterpart, Leonid Kozhar, and opposition representatives Arseniy Yatseniuk and Vitali Klitschko.

“The people want to see a modern Ukraine where there is the rule of law and where rights, freedom and democratic values are respected,” Lajčák said, as quoted by TASR.

Reactions by Slovak politicians have been scarce, however, despite the fact that observers consider Ukraine to be the key foreign policy issue that Slovakia should be focusing on.

Former foreign minister and current MEP Eduard Kukan of the opposition Slovak Democratic and Christian Union party (SDKÚ) called on Slovakia to take a clear stance towards Ukraine and support the pro-EU protesters.

“An increase in authoritarian tendencies is not in the interest of Ukrainians, but nor Slovaks,” Kukan said, adding that it would benefit Slovakia to have a democratic and pro-European Ukraine along its eastern border.

The Slovak-Ukraine border is 98.5 km long and also serves as the border for the Schengen zone, which means that for Ukrainians Slovakia is a gateway to the EU. Slovakia’s exports to Ukraine amounted to over €440 million, and mostly include cars, iron, steel and technology. The mutual trade is hindered by tolls and bureaucracy.

Ukraine has been a priority of Slovakia’s foreign policy, but the protests have made this topic even more pressing, Vladimir Bilčík, analyst of the Slovak Foreign Policy Association, told Sme .

“Ukraine is our biggest neighbour, [and] at the moment the least predictable one, which we share the Schengen border with,” Bilčík said, adding that Slovak diplomacy now needs to work hard in Ukraine, including the realisation of development aid.

Ukraine’s decision to suspend the association talks came as bad news for Slovakia, as the association agreement would change many things for the better: it would foster closer ties between the two governments and ease rules along the border, potentially boosting economic cooperation.

“Always, when there is a clear division on the border, and different regimes, it means bigger costs, for instance the costs connected with the control of the movement of people,” Bilčík said.

Slovakia would also benefit from the association agreement by not being at the periphery of the EU anymore in terms of the country’s stability, Bilčík noted.