A SERIES of postcards depicting a passenger car mastering sharp turns along the Šturec mountain pass was issued some time in 1920 by the Ružom-berok-based company Fatragarage. The company provided bus transport between Dolný Kubín, Ružomberok and Banská Bystrica, and the postcards were probably used for advertising. 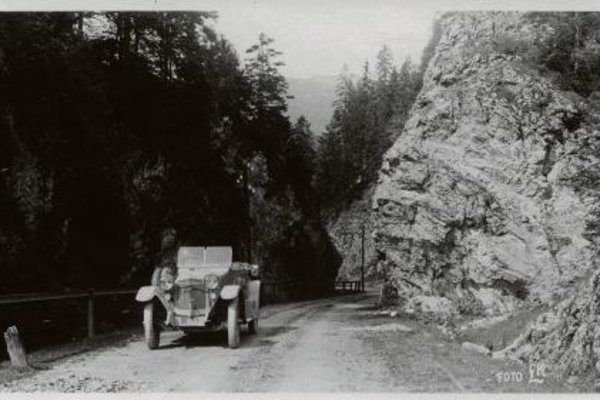 The first cars appeared in Liptov around the start of the 20th century, but as early as 1871, the first road-traffic code was published here, allegedly due to busier traffic in this northern region.

In 1914, about 470 cars were registered on the territory of today’s Slovakia, and we can assume that several dozens of them might have been driven on Liptov’s roads at the time. Even this number, negligible by today’s standards, was enough for chroniclers to record the first road accident, which occurred on May 6, 1907, by a landowner from Spiš Hrhov named Vidor Csáki who was driving a passenger car.

A bit later, in the 1930s, cars were no longer such a big attraction, and they were used for much more prosaic activities than being paraded in front of astonished town and village locals, or for driving in dangerous daredevil races.

In Liptovský Mikuláš, the local municipal office had one car at its disposal, and its own driver, Matej Klimo. In the summer, Klimo would sprinkle water on the town’s streets to prevent them from being dusty, while in winter, he would remove the snow from the roads.