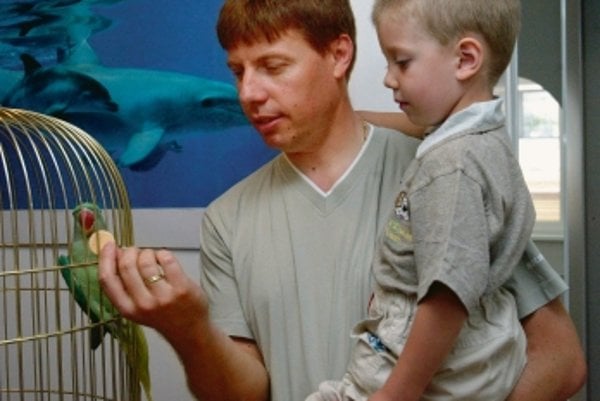 SINCE social networks and media became important part of children’s lives choosing which people are worthy of being role models became significantly harder. It may seem wrong that young people tend to prefer shallow public figures as their idols, but this is in fact a natural part of the maturation process, experts say.

Young people seek and change role models frequently as they age. Small children observe the behaviour of their parents and after they start to visit elementary school they become interested in what their classmates do. Later, as teenagers they stop to admiring their parents and pick idols on basis of their image or personal qualities, Eva Smiková, psychologist from Research Institute for Child Psychology and Pathopsychology (VÚDPaP) told The Slovak Spectator.

“Role models offer the basic help and orientation particularly for children and adolescents,” Smiková said. “It was documented that idols have important role in developing one’s career aspirations, education and creation of self-image.”

Among the most important factors for producing role models are family, classmates, various leisure time and sport centres as well as media, she said.

Small children are primarily observing behaviour of their parents and later are interested even in theirs siblings’ behaviour, according to Smiková.

However, even some older children positively evaluate job performance and professional aspects of their parents’ lives while siblings may be role models in cases when they try new things, fulfil their dreams and deal with life challenges, Norbert Vrabec the head of Media Literacy Centre and head of Media Education Department both at The University of Ss. Cyril and Methodius (UCM) told The Slovak Spectator. He referred to a study focusing on role models and media conducted by him and Dana Petranová, dean of Faculty of Mass Media Communication, in 2013. The study analysed 241 essays of children aged mostly from 15 to 19, tens of focus groups and questionnaires with 275 respondents.

Thanks to television, internet and social networks children can choose from much higher number of role models then in the past. This can lead to superficial choices. However, the first and most important role models are always parents, Jana Ashford, psychologist from Alma Psychological Centre told The Slovak Spectator.

“It doesn’t have to be model in sense of some ideal or idol but how parents live, which values they prefer, how they spend their time and so on,” Ashford said. “It significantly affects children in their present as well as future life.”

Literature also offers role models to small children, according to Smiková. Books for small boys who are focused on idea of manhood and images of successful men are full of heroes and adventurers who are self-sufficient and act sturdily. On the other hand, literature for small girls depicts more or less traditional women roles but also tell stories about young rebelling heroines. When girls are older rebellion is suppressed and this type of heroine is replaced by role models who can help girls to deal with their fears, insecurities, own body and so on.

The importance of parents decreases after children reach their teenage years. Smiková explains that generally children focus on their appearance during the puberty because they start to think about love and relationships. Therefore they put emphasis on image of their role models including their appearance, behaviour or way of life.

The growing influence of popular culture and mass media is followed by rising popularity of celebrities. Those people are particularly promoted by tabloid media which give to children opportunity to be identified with someone popular. By doing this media offer also information about behaviour models, values and standards connected to celebrities. Those values including success, fame, admiration and wealth lead to social prestige and are highly recognised in society.

“It may seem that those characteristics are shallow but child in this period is refusing parents and looking for someone more attractive,” Smiková said. “It doesn’t mean that it is good or bad it is simply related to this age.”

Teenagers are also particularly looking for role models in those spheres of life which they are interested in. If sport draws their attention they will probably have athlete as a role model, if it is rap music, the rapper will be preferred. It is based on personal preferences, according to Smiková.

Young people show the most trust in people doing the so called helping professions, such as doctors, firefighters or police officers. The helping professions are frequently, and in a positive way, presented in media and UCM’s study shows that media are the reason why those professions are attractive for people despite they lack personal experience with them.

On the other end of the survey are politicians, who work in the most unpopular profession. Many respondents are not only disinterested, but they even expressed aversion to such jobs. Such attitudes can be aimed at everything related to the government therefore even citizen activists or whistleblowers who could be role models are ignored, according to Vrabec.

Children may ignore real heroes even because no one told them about such people, Petranová told The Slovak Spectator.

“If a young person doesn’t learn about some role model from parents, school or media why would he or she should follow or imitate them,” Petranová said.

The role of teachers

Older children can be influenced in school. Teachers may affect children behaviour by their lectures and even themselves become a sort of role model, according to Ashford.

Teachers at schools should discuss the famous people and role models with their pupils however saying which idol is good and which bad is ineffective strategy how to improve children’s decision making in this matter, according to Smiková.

“You can’t force children to like someone,” Smiková said. “However, when you explain and discuss with them why some people are important and some don’t then you improve children’s critical thinking so they can choose [their role model] by themselves.”

Children as role models, even for adults

CHILDREN supporting classmates suffering from cancer; a paralysed boy who, despite his disability, saved a baby from choking to death; pupils organising a toy drive for children in need: these are just some of the stories of children awarded the Child Deed of the Year 2013.

“Letters from children and their teachers for Child Deed of the Year are my source of astonishment that children are often more mature and responsible than adults,” Erich Mistrík, a member of the award commission, told the Pravda daily.

The commission received almost 8,200 deeds proposals and around 118,000 children voted online for the winners, according to Pravda.

First grader Leo was diagnosed with cancer and had to leave school for immediate and intensive treatment. His classmates, however, showed their support, and regularly sent him sweets, pictures and homework. When they learned of the exorbitant cost of his treatment, they immediately began raising money to help Leo and his family out, even getting people outside the school to chip in.

Despite all their support, Leo lost his fight with the disease, and left his toys and bicycle to his friends, according to the Child Deed of the Year webpage.

Although thirteen-year-old Jakub was totally paralysed in his hospital bed, he noticed that the baby in the next bed over had stopped breathing and was turning blue. Jakub’s mother was feeding him when she noticed that he was refusing to eat. Unable to speak, Jakub started to cry, which alerted his mother to the baby’s situation. Luckily, the baby was saved. Jakub’s condition also improved, as he is now able to walk and speak.

Another winner of the award is 15-year-old Simona Ešeková, who started taking care of eight-year-old Dominika after she and her four siblings were abandoned by their mother. Ešeková helps Dominika with her homework, gets her ready each day and takes her to school, despite the fact that she is not related to her.

Vlasta Jendroľová, 15, received the award when she had to take on her mother’s duties after a disease damaged her brain. Every day after school, she takes care of her mother and their animals before starting on her homework. Similarly, 15-year-old Viktória Tóthová was awarded for taking care of her immobile godmother when she was 13. Tóthová spent her summer holiday washing, feeding and massaging her godmother.

Awards also went to Rút Marcinčáková, who saved three abandoned puppies from freezing to death, and pupils from a primary school in Prešov who organised a toy collection for disabled children. A special award went to 11-year-old Jakub Križan, who made a vow never to use vulgar language, even if pressured by his classmates.