FINALLY, after the removal of lengthy political and logistic obstacles, the Slovak capital has its own Kunsthalle, the house of art that has no collections and exhibits of its own, but rather exhibits temporary shows of modern art curated so as to evoke questions and open dialogue. 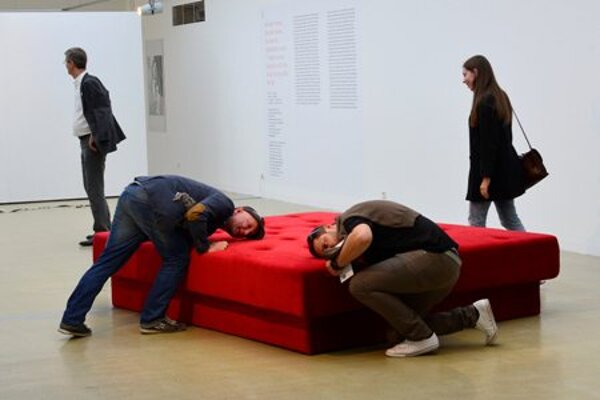 FINALLY, after the removal of lengthy political and logistic obstacles, the Slovak capital has its own Kunsthalle, the house of art that has no collections and exhibits of its own, but rather exhibits temporary shows of modern art curated so as to evoke questions and open dialogue.

The Kunsthalle Bratislava (KHB) plans to present to the Slovak and foreign public exhibitions mapping contemporary Slovak art, as well as some of the most current foreign artists and their works. As one of the roles of KHB is to win over public support for modern art, rather than having employees only guarding the exhibits, there are so-called “mediators” present who can explain the concept of the exhibitions, the curators’ ideas, as well as the overall dramaturgy of the venue. They can also speak a foreign language.

The big exhibition in the main part of KHB is called Paradox 90s – Curatorial Concepts during Mečiarism (1993- 1998). As the name reveals, the exhibition which was prepared by a team of eight curators Juraj Čarný, Richard Gregor, Daniela Čarná, Barbora Geržová, Beata Jablonská, Lýdia Pribišová, Mira Sikorová-Putišová, Nina Vrbanová) tries to explore the “dark era” of the post-communist history of Slovakia, when Vladimír Mečiar and his HZDS party ruled the country with an “iron hand”. This totalitarian rule that was so hard from the political and social point of view might have had, paradoxically, a supportive impact on the art which served as a kind of retreat or refuge. The exhibition shows demonstrations of the most outstanding exhibitions that took place in Slovakia in 1990s; and it is accompanied by a voluminous bilingual catalogue of the same name, with all the texts appearing both in Slovak and in English.

This exhibition will be available until October 22, and then from December 11 till February 1, 2015. The KHB also wants to stand out among other museums and galleries with its opening hours: while most of them are closed on Mondays, the KHB will be open daily except for Tuesdays from 12:00 to 19:00 (and until 21:00 on Fridays), Zuzana Golianová of KHB informed.

The LAB venue brought artworks back to their original place, KHB’s temporary head and current manager of international relations, Juraj Čarný, said at the opening of this more intimate space. During communism, artworks and souvenirs were sold here in the Dielo (Work) outlet, but later the mobile operator Orange had a shop here. The idea of LAB is to bring prominent foreign artists, especially those focused on interactive, site-specific projects which exceed the borders of “ordinary” or common visual art.

From among 200 competitors, the committee selected Karl Salzmann, an Austrian sound-kinetic-experimental artist. Salzmann also studied, apart from visual art, computer music and he confessed to the Slovak Spectator that he has always been fascinated by sounds and music and their combination with physics and art objects.

He also added that he was happy with his works being exhibited in downtown Bratislava, close to passers-by. Salzmann said that apart from one work, all have been made specifically for the KHB LAB. His Wave Studies / Vlnové štúdie is a playful exhibition that invites not just children, but also curious adults who like to be intrigued and have kept open minds and hearts. It can be visited only until October 25, to be followed by exhibitions of the Electro Moon Vision grouping and by another Austrian, Erwin Wurm, later in 2014.

The admission to both venues of Kunsthalle in the SNP Square in Bratislava is free. More detailed information can be found at kunsthallebratislava.sk. For October 17 at 19:00, December 17 at 17:00 and January 16 at 19:00, commented tours in English are planned.