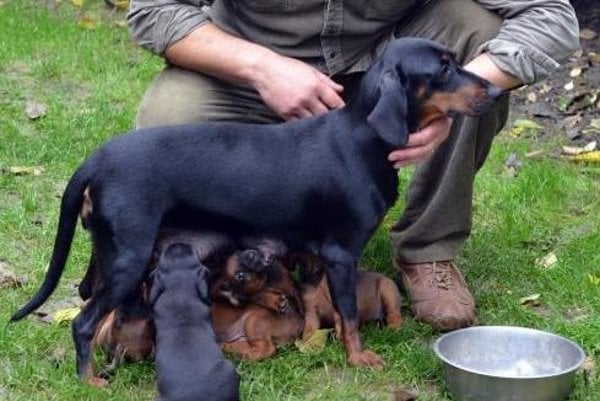 Breeder Ján Meňky from Michalovce in eastern Slovakia explained for the TASR newswire that the breed is a reaction to recent trends in hunting.

“Today, the hunting grounds are not as big as they used to be in the past,” he said. “Thus, we bred a dog suitable for tracking the game on smaller areas. It is a dog not demanding in terms of space or nutrition, and is ideal for individual ways of hunting.”

The breed is a result of cross-breeding flat-coated dachshund, Bavarian mountain hound and Slovenský kopov, or Slovak hound, another national race.

In October, Meňky’s female dog Melisa bore 10 puppies. “This pure-bred litter marked F 2 is the first ever between two Tatra hounds,” he said. “Her puppies are fit as a fiddle, fulfilling all expectations that we had in mind when cross-breeding – both in size and colour, and in similar characteristics. We will try to successfully keep the requirements for the size and working skills also in the next litters.”

Tatra hound should be loud when working (as is the dachshund), but sociable at home. The breed can be kept also in urban apartments.

“They like to be petted, but can also guard well if necessary,” Meňky added. “It is a dog apt for tracking, as his ancestor hound is – and able to hunt game, of course,” the breeder from Michalovce summed up.