VÁHOSTAV-SK, one of the country’s biggest construction firms, is drawing headlines amid plans to pay just 15 percent of its debts to small business subcontractors as part of its restructuring plan. 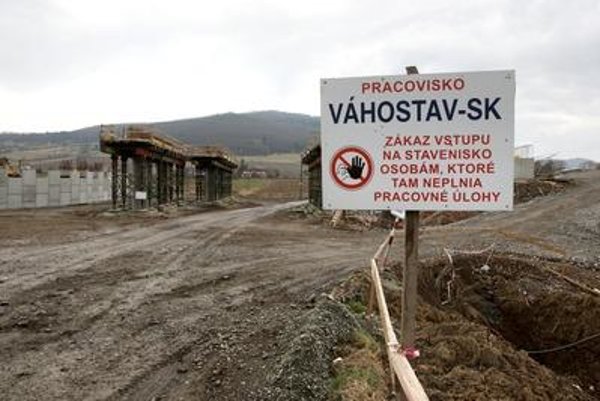 The plan has angered not only the entrepreneurs but has drawn criticism from both Prime Minister Robert Fico and the political opposition. As Fico strategises ahead of elections next spring, this places him in the position of criticising Juraj Široký, an alleged sponsor of his Smer party with a controlling interest in Váhostav-SK. Fico has declared that his cabinet will support an investigation into the restructuring.

“We are perceiving and feeling that in the case of the Váhostav-SK management there might have been a question of criminal behaviour,” Fico said at a press conference on March 27, as cited by the SITA newswire.

Fico is distancing himself from Široký. “I do not need any sponsors or businessmen. What do I have with Mr Široký?” asked Fico, as cited by the online edition of the Denník N daily.

The police have already started investigating Váhostav-SK, which under the governments of Fico as well as his predecessor Iveta Radičová, has won several large state contracts for highway construction. In some of those cases it offered prices below those estimated by experts. The results have led to the company failing to pay many of its subcontractors.

The company is ready to provide all information and will cooperate with investigators, the company responded via spokesman Tomáš Halán.

Váhostav-SK plans to pay small subcontractors, those with unsecured debts, just 15 percent of the €104.68 million that is owed, a total of €15.7 million – and this only over the course of five years. The courts has not approved the restructuring plan yet.

Transparency International Slovakia, in cooperation with Bisnode data company, has uncovered the complicated ownership structure of Váhostav-SK, which leads to shell companies in New Zealand and Cyprus and even five private persons based in Costa Rica, SITA wrote.

Another of the country’s biggest construction firms, Doprastav, recently underwent a similar restructuring process. Much like Váhostav-SK they were failing to pay subcontractors. Doprastav blamed the bad economic situation and decline in demand for construction.

In recent years it has been common practice for construction firms to take contracts below costs to keep its labour force and machinery active, amid pledges to make up for the difference with profits from other projects. Those more profitable orders now look as if they did not arrive fast enough.

Now Váhostav-SK is working on its restructuring plan when the committee of creditors consisting of Slovenská Sporiteľňa, ČSOB and Tatra Banka, as well as the construction company Doprastav and subcontractor Lomark, returned its draft on March 31 for reworking. The firm has 15 days to respond.

In its original plan it planned to settle 15 percent of its debts or €15.7 million to small and medium-sized companies. So-called secured creditors, that are especially banks that have secured their loans with collateral, will receive 100 percent of their claims. In total the firm wants to repay just 32.3 percent of its total debts of €136 million, or €43.9 million.

Lipšic has also suspicions that representatives of Váhostav-SK at the time when they were signing contracts for highway construction back in 2011 knew that they would not be able to pay their subcontractors.

“It is very important that bodies active in prosecution start to deal with the case as soon as possible so that the restructuring plan of Váhostav-SK is not approved,” said Lipšic. The court is obliged to turn down such a plan if approval of such a plan was achieved by fraudulent actions. “We have from today two months when the court will decide about confirming or not confirming the restructuring plan.”

The General Prosecution in collaboration with the National Criminal Agency (NAKA) are already checking various circumstances. Opposition parties such as the Christian Democratic Movement (KDH) and non-parliamentary Sieť of Radoslav Procházka are calling for help to small businesses and the self-employed to whom Váhostav-SK wants to pay only a fraction of what it owes.

KDH is calling for a special parliamentary session on Váhostav-SK.

“We want to deal with this and other cases, which we consider to be fraudulent conduct against the weak, conduct which suits the powerful but harms not only the economy but also real families,” said KDH chairman Ján Figeľ, as cited by TASR.

He pointed out that under the process of restructuring five shell companies have been created and that there is a serious suspicion that in the committee of creditors there were companies which have funnelled state payments to exotic destinations so that Váhostav-SK need not fully pay its debts.

According to the Sieť party, victims of the restructuring of Váhostav-SK need immediate practical help from the state, which has turned a deaf ear to the desperate situation of families of self-employed craftsmen and small entrepreneurs.

“Sieť wants justice for the self-employed and small entrepreneurs,” said Procházka, as cited by TASR. “Their claims should be fully settled; equally to banks which have lent money to Váhostav-SK. The small and weak have the right for the same approach as the large and strong.”

While Fico first sought to stay out of the process, he later even convened a press conference on March 27 to announce that his cabinet would support investigation of Váhostav-SK’s restructuring process and proposed measures to avoid similar situations in the future. He also blamed the previous Radičová’s cabinet, on which Figeľ sat as the transport minister, demanding that construction companies build highways cheaply, for the current problems of Váhostav-SK.

“There was a high interest in doing politics that our first government built highways expensively and the government of Iveta Radičová built them very cheaply,” said Fico, as cited by TASR.

He used an example of a project of the D1 motorway stretch between Dubná Skala-Turany, the contract signed during Radičová’s term in 2011. In that case, while state expert opinion showed that the project could be built for €334.7 million, the winning bid was just €137.8 million.

“The difference was nearly 60 percent,” said Fico, adding that this was the kind of pressure that was imposed on companies by then transport minister Figeľ in order to demonstrate politically that tenders during their first government (2006-2010) were overpriced. Thus companies, including Váhostav-SK which signed contracts under the term of Radičová, might have a motive to engage in fraud.

Figeľ responded that it was neither the cabinet of Radičová nor him who pressed on construction companies to reduce bids in highway construction tenders and that it was the market which generated such prices. He sees Fico’s criticism as an indirect confession that the first Fico government set highway prices politically and not via transparent competitions, TASR wrote.

The KDH head also recalled that current Transport Minister Ján Počiatek behaved similarly when he accepted a price of €410 million for construction of the Višňové highway tunnel, a price 55 percent lower than that estimated by the state’s experts of €900 million.

Fico also recalled that the current law on restructuring was adopted by the second Mikuláš Dzurinda cabinet and that 781 proposals for restructuring were submitted between 2006 and 2014, out of which courts allowed 526 restructurings.

The opposition argued that the Fico cabinets have had seven years to change the restructuring legislation while it not only has not done so but they even turned down draft legislation prepared by the opposition.

There are three Slovak companies behind Váhostav-SK linked with Juraj Široký, according to Transparency International Slovakia and Bisnode investigation. Ownership relationships continue to Cyprus, New Zealand and Costa Rica.

There are also some suspicions that behind the shell companies that are creditors of Váhostav-SK is Široký himself and thus part of money to be paid out during restructuring would end in his shell companies, Denník N wrote.

If the owners of Váhostav-SK on one side and its creditors on the opposite side have any ownership relationships between them, there is a danger that the whole process of restructuring debts would be considered as manipulated and the company might be put out of business anyway.