ONE OF the legends of American football, Charles “Chuck” Bednarik, called Concrete Charlie, was born in 1925 in Bethlehem, Pennsylvania but claimed he felt himself to be Slovak. 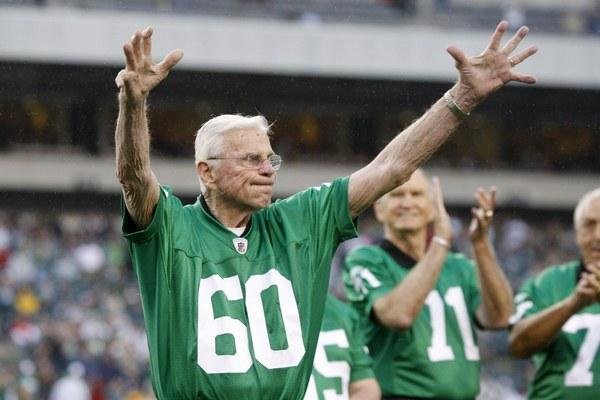 His father emigrated from the village of Široké near the eastern-Slovak city of Prešov in 1920. “I have been to Slovakia three or four times, and I really love the memories,” Chuck Bednarik said. “People were very kind to us,” he told years ago, in an interview for the Pravda daily.

He attended the school of Ss Cyril and Methodius in Bethlehem – a Slovak parochial school with education being offered in Slovak. The boy began playing for Bethlehem’s Liberty High School. After the graduation, he entered the United States Army Air Forces, aged 19, and served as a B-24 waist-gunner with the Eighth Air Force. Bednarik accomplished 30 combat missions over Germany for which he was awarded the Air Medal and four Oak Leaf Clusters, the European-African-Middle Eastern Campaign Medal and four Battle Stars.

The war gave me a certain toughness, he said as quoted by the Sme daily. When he survived and returned back home to the football field, he thought how simple was that, he added. Bednarik was of the last players to excel on two positions – as a centre and as a linebacker – and was among the toughest athletes of the National Football League. He often played also injured or played for all 60 minutes of the game. In his 14 seasons with the Philadelphia Eagles he missed only three games.

The nickname Concrete Charlie was perfect, as apart from being a rough footballer, he traded in concrete outside the season.

In 1967, he was introduced into the Football Hall of Fame; in 1969, he was elected the Centre by the football league for the 50th anniversary of his team, and also for the University Football Hall of Fame. 1n 1987, his dress No 60 was “retired” and no-one else will ever wear it (as one of only eight numbers retired in the history of the franchise).

Chuck Bednarik died on March 21, 2015. “With the death of Chuck Bednarik, we and our fans lost a legend,” chairman and CEO of Eagles Jeffrey Lurie said. Philadelphia fans grew up expecting toughness of their team, a 100-percent commitment and an elaborated approach. A big part of these expectations stems from the way Chuck used to play, he added.

Officially, Bednarik died after a short illness aged 89. However, his daughter Charlene Thomas claims the contrary: “He died from dementia from football-related head injuries," Charlene Thomas told The Express-Times of Easton “It was not brief.”

Pamela McWilliams, who also believes football injuries played a role in his decline, said her father was diagnosed with Alzheimer’s disease. “I certainly think it played a big role in it — he took a lot of blows and they certainly didn’t have the safety equipment they have now, back then,” McWilliams told The Express-Times. “It seemed like quite a few of the guys he played with and against had it.”