30. July 2020
Beata Balogová
The Vlkolínec village is on the UNESCO list. (Source: SME)

​The small village of Čičmany in Žilina Region resembles a village of gingerbread homes.To prevent the wood from rotting, residents began a tradition of painting the outer wooden beams with white lime – it soon blossomed to ornamental paintings on the front side of the houses.

These unique patterns inspired the embroidery in the region, and have come to represent the country as a whole. Slovak Olympic teams of recent years have included such patterns on their official uniforms.

”The pattern is supposed to symbolise Slovakia, so that our sportsmen would be easily recognised,” Ľubomír Souček from the Slovak Olympic Committee told The Slovak Spectator.

While the embroidery tradition has been maintained, the unique houses have had to be revived.

“This version [of the village] is a result of a big effort of architects [Dušan] Jurkovič and [Jindřich] Mergan,c who measured and documented the village in detail in 1920s,” says Nadežda Hrašková from the Faculty of Architecture at the Slovak University of Technology. “Based on their work it was possible to reconstruct Čičmany completely after it burned almost to ashes in 1921.”

The aesthetically pleasing houses were declared a historical reserve of folk architecture in 1977, and some are available for use as accommodation facilities. Elsewhere in the country, interesting architecture took its inspiration from abroad. The types and styles of houses often vary from region to region and are a symptom of not only natural conditions but also surrounding nations and cultures.

“The region of western Slovakia is for example notable for the cultural impact of Moravia and Austria, and also the Croatians and Hutterites, who settled here,” says ethnologist Matej Kotal. Practicality and frugality prevailed in these areas, he adds.

In this vein, an appropriate exhibition of folk architecture is the village of Vlkolínec, near Ružomberok, with its still-inhabited, preserved wooden houses. The area is a unique display of rural life in the foothills of the Veľká Fatra mountain range. More information about Vlkolínec can be found in our Žilina region guide. 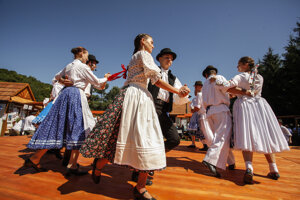 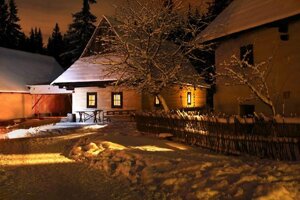 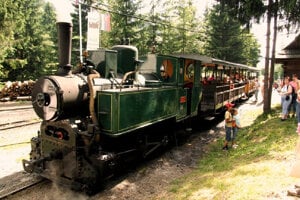 History buffs have ample opportunity to visit museums and castles in Slovakia, but another possibility is an open-air museum that replicates a traditional peasant village. Called skanzen, the name comes from the designation of the first open-air museum in Sweden established in 1891, which became the model for other such sites in Europe.

The biggest skanzen in Slovakia, the Museum of the Slovak Village, is in the town of Martin and represents the architecture of various regions, including Orava, Turiec, Liptov, and Kysuce. Established in 1968, there are dwellings, farm houses and sacral buildings.

Some include interior furnishings. “Many visitors could be labelled as tradition enthusiasts, alternatively people often come here to look for inspiration when renovating, reconstructing or building their own houses,” says Slávka Straková, spokeswoman for the Museum of the Slovak Village.

Get festive in Slovakia

Folklore fans eager to experience more than just traditional buildings and who enjoy traditional music and dance should not miss the annual festivals held in summer in various regions of Slovakia.

Every year the second weekend of July is dedicated to the Podpolianske slávnosti festival or Folklore Fest Under Poľana, in Detva. The region is rich in traditions and typical folklore phenomena blend history with music and dance ensembles amid hundreds of participants from all around the world. It all takes place in a wooden amphitheatre.

The oldest folklore festival however is in the village of Východná in the Liptovský Mikuláš district. It has taken place every year in the first weekend of July since 1953. The organisers of Východná Festival are aiming to present the national culture interactively and do so with new and creative approaches.

Kroj: The tale of traditional clothing

Fifty years ago it was still possible to spot older women dressed in richly embroidered folk costumes walking to church on a Sunday morning in the Slovak countryside. While traditional folk costumes are gradually disappearing as everyday wear, awareness of their cultural value seems to be growing – fuelling a whole segment of craft businesses.

Slovak couples more and more frequently opt for a traditional-style wedding and wear folk costumes for their big day. The number of websites offering part or whole sets of traditional attire from all over Slovakia is growing, while wearing a folk costume at formal occasions is no longer considered only a sign of nationalism. Slovakia boasts a rich and long-rooted tradition of folk costumes, with many remaining well preserved in regions until the mid 1950s. Today, a number of museums, ethnographic collections as well as performances of folk ensembles display a variation of these traditional costumes. Clothing indicates not only the region the owner came from but often the social status, profession, climate or religion.

“I see the folk costume at its utmost as a work of art, which in traditional culture bears similar importance to architecture, a song or a tale,” said Karel Plicka, a late Czechoslovak filmmaker, photographer, folklorist and one of the founders of the ethnographic film genre in his homeland. 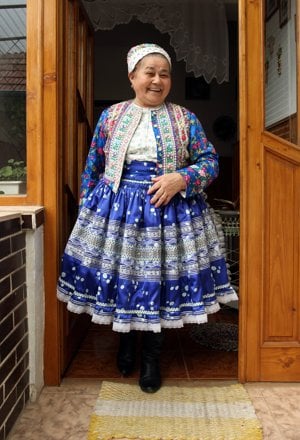 Folk costumes have been created and formed by generations of folk artists, until they reached their peak form, which Plicka cites as occuring after World War I. Plicka describes folk costumes as an exhibition of “refined beauty, a delicate sense for form, colour, material” and “an ideal harmony of all elements” from head to toe.

Plicka noted that the person dressed in a folk costume is no longer anonymous because he or she has identified themselves with a “concrete human and spiritual community” and at the same time they were obliged to “preserve the good name of the community” as the folk costume “spiritually united people”.

The kroj, the Slovak equivalent for folk costume, wasn’t just clothing, as it also fulfilled a function of signals and signs – it became the identification of the person who wore it “a kind of non-verbal communication between wide communities of inhabitants”, Alžbeta Gazdíková, an ethnographer, specialising in traditional folk costumes explained in a piece written for the Centre for Folk Art Production (ÚĽUV).

At the turn of the 20th century, there were 60 folk costume regions in Slovakia, which differed in colour, materials, particular composition of ornaments, patterns and techniques, according to Gazdíková.Slovak folk costumes preserved some archaic elements, but at the same time, the creators were able to transform several details of the fashion of particular periods in a way that other members of the village community accepted, Gazdíková wrote.

The costumes often feature embroidery inspired by Renaissance ornaments, while the shapes of some garments, such as bonnets, bodices and sleeves, carry traces of the baroque, rococo or Biedermeier styles.

Western and central Slovakia – mainly areas around Trnava, Bratislava, Piešťany, Horehronie, and Krupina – boast richly embodied clothing, while bobbin or braided lace was a popular technique throughout the country. In central and eastern Slovakia, a variety of weaving techniques rich in different patterns and colours can be found, while modrotlač, a Slovak blueprint (resist dyeing), was frequently used countrywide, Gazdíková noted.

Parts of the traditional folk clothing include a baranica, a warm hat made of sheep’s fur; a jacket, cap, coat, apron and vests or lajblíks in Slovak, pants, belts, slippers or boots.

When asked to pick the most remarkable Slovak folk costume, Gazdíková told The Slovak Spectator that “each of these have something remarkable”. Traditional forms and ornaments are also making it into mainstream clothing today. For example ÚĽUV, an organisation for documenting and protecting traditional crafts and folk production, has attempted to inspire young designers to create modern products that combine the traditional elements through a competition called Circles on Water, Mária Tomová, head of the ÚĽUV marketing department told The Slovak Spectator.​

​Most artisans delivering their products for ÚĽUV work at home, but there is an exception with the pottery studio in Pezinok (20 kilometres from the capital). In all of its galleries, three in Bratislava, one in Banská Bystrica and one in Tatranská Lomnica, there are leaflets in English and an English-speaking guide is available, if arranged in advance.