The cities of Bratislava and Zvolen are preparing for climate change by adopting green measures to improve the living conditions for their citizens. 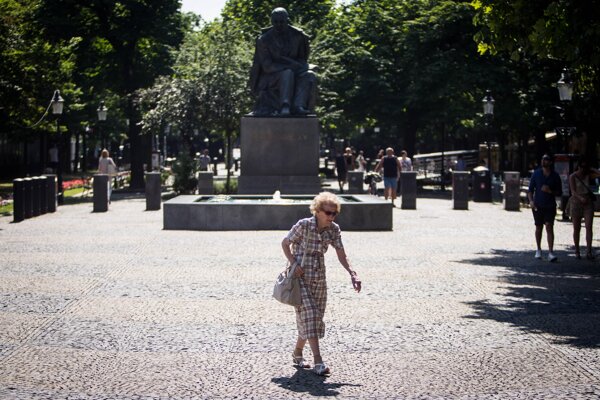 WE HAVE again had days of extreme heat here in Bratislava and in other cities around the country. Extreme temperatures, dry air and lack of water; then some days later torrential rains. Climate changes affects all European regions, directly or indirectly, though the impact will vary according to geographical location and adaptation measures undertaken. Consequences of climate change are especially apparent in urban areas, inter alia in high temperatures in the summer, and periods of droughts and floods. Moreover, landscape use, urban growth and sealed surfaces can increase the risk of extremely high temperatures and floods and contribute to soil desiccation and lack of drinking water in cities.

These are challenges we have to address. By taking preventive measures and adapting the city landscape, we can limit the negative impacts of climate change. I am thus pleased to see that city councils in different cities in Slovakia are responding to these challenges. Recently, the cities of Bratislava and Zvolen adopted climate change adaptation strategies. The strategies include measures like creation of new green public areas and restoring parks and fountains, building green roofs on buildings, replanting of trees, and retaining and managing rainwater.

Adaptation to climate change is important for the social and economic development and well-being of people in all societies, cities and countries all over the world. That is why Adaptation to Climate Change is a priority programme within our EEA/Norway grants for Slovakia. The programme receives around €13 million from a total allocation of €80 million in the EEA/Norway grants for Slovakia for the period 2009-2014.

The adaptation to climate change projects in the cities of Bratislava and Zvolen are pilot projects within this programme aiming at re-establishing the conditions necessary for healthy, balanced and dynamic ecosystems also in urban areas. The two other focus areas within the EEA/Norway programme are flood and drought prevention in the countryside in Upper Nitra and Zemplín, and a ‘Blue School’ scheme for education on climate and environment in 70 schools in Slovakia.

I am very pleased that we can take part in the Bratislava Get Green and the Zvolen Greening Innovation projects and thus contribute to the implementation of their climate adaptation strategies. The projects will help the cities to get greener, healthier and less overheated in summer; as they will plant new trees and create new green areas in the city centres, retain water and restore public green spaces and squares, like Námestie Slobody and Hlavné Námestie, create green roofs on a school building and a Senior’s house in Bratislava and the main bus station in Zvolen, as well as make a green research campus at the Zvolen Technical University.

I really hope that Bratislava and Zvolen will become flagship green cities and good examples of what the greening of a city can do to improve the lives of its inhabitants and visitors.

Inga Magistad is the Norwegian Ambassador to Slovakia