Workout – back to the Street

MANY bodyweight exercises originated in ancient civilisations where they were used for Army training; street workout aims for something similar. 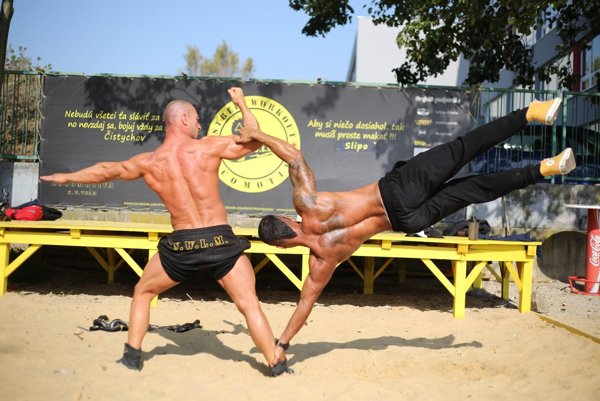 In the past, our ancestors climbed trees and covered long distances on foot. Nowadays, we live in cities and often do not have time for exercise. Minimalist equipment of street workout enables us to fit some movement into sedentary lifestyles.

Street workout was popularised by Hannibal – a man from Bronx, New York, whose YouTube videos displaying incredible skills took the world by storm. The philosophy is based on exercises that use pure bodyweight; most of them are known from compulsory physical education lessons, gymnastics and bodybuilding.

Although skills of the best street workout athletes seem like from another planet, everyone can participate. There is a progression of movements from the basic and everyone can start at the level that best matches his condition and level of skills. Moreover, it can be trained anytime as it does not require equipment or gym membership.

Workout is a lifestyle

“Street workout is a kind of revival of the early period of bodybuilding, when people exercised outside, utilising basic exercises with weights and gymnastics,” said Ľudovít Major, the editor-in-chief of Czech & Slovak edition of MUSCLE&FITNESS magazine. “It is a vital supplement to the traditional workout in the gym, where people learn to control their own body.”

Major believes that it is an option for the people who are getting bored with crowded fitness centres adding that construction of gyms can also help the residential areas in towns that are lacking facilities for active lifestyles.

People from different walks of life are coming to the parks and special outdoor gyms to workout, learn new exercises and also spend some time in nature. Street workout is popular mainly amongst young people and outdoor gyms with bars, ladders and poles are being built all around Slovakia. Members of the Street Workout Locomotiva group built one gym at the Draždiak Lake in Bratislava.

“Street workout isn’t about big muscles or lifting heavy weights,” said Michal Wolf, one of the founders of Locomotiva. “People learn how to control their body and it helps them to perform skills that are considered incredible. It is also about motivation and being a member of the team.”

For some working out is a lifestyle, either in terms of active training as well as in the field of nutrition and theoretical knowledge. One of the main advantages is that it is free and those interested can practice virtually anywhere.

For beginners, Vlado, one of the enthusiasts, recommends patience and gradual progress.

“Haste can result in unnecessary injuries,” Vlado admitted. “Focus on proper technique and form; five proper repetitions of an exercise are more than 15 botched up. You build up the basics and after that you can progress to more challenging movements.”

Street workout in Slovakia does not have an organised structure, most of the crews work independently or they are a part of official bodybuilding or sports clubs. Instead of formal training, most of the skills are learnt from peers or from the internet. Many YouTube channels offer tips and advice for different levels of participants.

A World championship in street workout is held every year and the best athletes from each country can participate. The judging is similar to gymnastics or figure skating, looking at the difficulty level of the moves but also on the aesthetic impression from the free routine.

Apart from competition, athletes participate in many shows and exhibitions, where they demonstrate their skills to the public.

Street workout does not belong to officially recognised sports in Slovakia. Some of the groups work as NGOs or are listed under local sport clubs, which enables them to ask for donations. Sport magazines, including MUSCLE&FITNESS, also try to promote these new fitness trends. However, the biggest platform for popularity is YouTube and word of mouth.