THE new government has met for the first time since the general election; it appointed a new group of state secretaries. 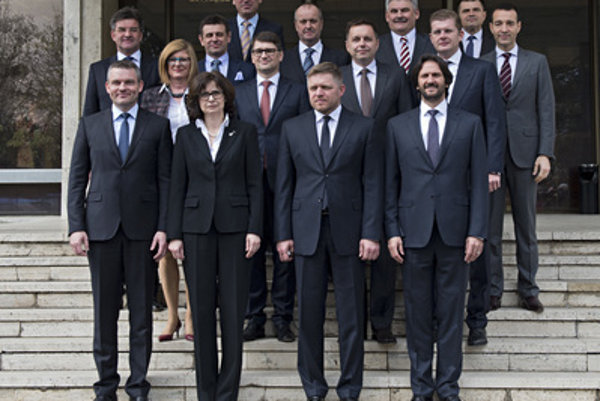 The new government had a photo-session before its first meeting. (Source: TASR)
Font size:A-|A+

Its talks on March 30 were led by re-elected Prime Minister Robert Fico of Smer, whose party – together with nominees of the Slovak National Party (SNS), Most-Híd and Sieť (Network) constitute the ministers of the new cabinet. Fico (Smer-SD) is to file the draft programme statement of his cabinet by April 13 for the next cabinet session, ministers decided on their first meeting.

Health-sector-related issues were on the agenda of the session, with Health Minister Tomáš Drucker (a Smer nominee) cancelling a contract worth almost €18 million. This contract, signed with the Plaut Slovensko last week by the National Centre of Health-care Information (NCZI), was meant to deliver an information system for administering and issuing chip cards to all health-care clients,. NCZI signed the contract despite the chance that chip cards might ultimately not be purchased, the daily Sme wrote. Drucker also stated, as quoted by the TASR newswire, that state-owned health insurer Všeobecná zdravotná poisťovňa (VšZP) should be led by someone from outside the health-care sector. The VšZP issue should be solved soon.

Bratislava-Ružinov borough councillor Igor Adamec was appointed to the Culture Ministry. As a well-known actor, he ran on the Sieť slate but was not one of its seven MPs.

Jozef Kamenický (Sieť) was approved by the cabinet for the post of Agricultural Ministry state secretary, and his counterpart at the Defence Ministry will be Ivan Máčovský (also Sieť).