Slovak lawyer Zuzana Čaputová received the Goldman Environmental Prize for her successful campaign against a landfill in Pezinok. 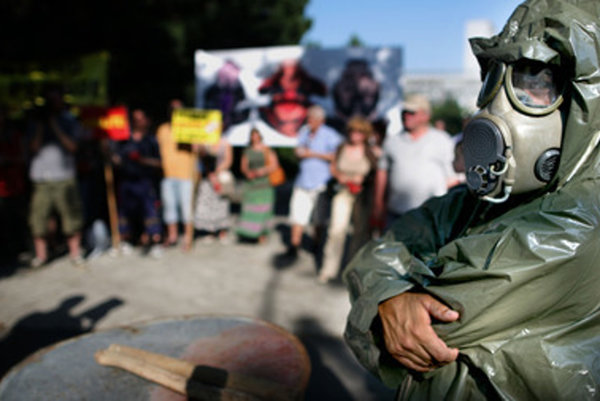 Despite the campaign of Goldman prize winner Zuzana Čaputová against a landfill site in the town of Pezinok was successful and the site is closed, the issue still causes problems for locals. The town is struggling to create a new land use plan due to non-cooperative authorities and amid worries that the whole case could be reopened.

After the Slovak Environmental Inspection approved the construction of the waste storage site in 2008 even though the dump was banned in the town’s master plan, citizens of the town took to the streets creating, at the time, the biggest protests since the Velvet Revolution. They pointed out that the Regional Construction Office (KSÚ) in Bratislava, which had also given the go-ahead on the dump, is led by Ján Man, who owns the land where the dump was to be constructed.

Since the then-courts were passing the cause among each other, the Court of Justice of the European Union intervened, specifying the rules concerning approval process of investments burdening the environment in 2013.  A few months later the Supreme Court ended the cause by not allowing waste to be dumped at the site.

Čaputová received the prestigious international award for her long-term fight against the landfill site within the Via Iuris organisation, as well as legal work in the field of environmental protection on April 18, 2016.

“It’s a great honour and I really appreciate this award,” Čaputová told The Slovak Spectator. “It is encouragement for my work but also encouragement for all people in Slovakia battling for justice or protecting their city.”

Pezinok Mayor Oliver Solga congratulates Čaputová and other activists but points out that the battle is not over.

“We have still not won because Mans (father and son both going by name Ján Man) and state authorities can reopen it,” Pezinok Mayor Oliver Solga told The Slovak Spectator, “but today’s situation is more optimistic than it was at the beginning.”

The first landfill site was built in Pezinok during the 1960s and now contains millions of tons of dangerous waste, while there is no protection against seepage of chemicals into the land. Via Iuris discovered that this is a possible reason why people in Pezinok suffer from some types of cancers more frequently than in other places in Slovakia.

This was also the reason why activists stood up against the plan to construct a new dump by Ekologická skládka (Ecological landfill site) company of Ján Man senior announced in 2002. Pezinok’s land use plan at that time forbid construction of any landfill site.

KSÚ in Bratislava, however, approved the construction without considering the public to be part of the process thus not providing them details in 2007. The next year, the Bratislava Environment Inspection Agency consented to the waste site saying that it will also not publish KSÚ’s decision in the matter because it is a trade secret.

Then mass protests started and citizens approached Bratislava’s regional court which refused to accept their complaints in December 2008. Three months later, the landfill site, the size of 12 football pitches, was completed.

“After we lost the case at regional court there were strong feelings of hopelessness [among activists],” Čaputová said. “Despite that I felt that until we know how to proceed we need to continue step by step with patience.”

People from Pezinok reached the Supreme Court which stopped the dumping at the site and decided that the whole approval process has to start again. The Constitutional Court, however, reversed the decision which sparked another mass protest. Citizens also gathered 8,000 signatures and approached the Court of Justice of the European Union.

Thanks to that, the court specified rules concerning some environmental issues in 2013 binding for the whole EU. For example, it stated that parties to proceedings must have access to the relevant information and that ordinary courts cannot take into account the opinion of the Constitutional Court if the latter seems to be contradictory with the European Union law, according to Via Iuris.

“It’s a great international success,” Juraj Rizman, from the central and eastern Europe office of Greenpeace told the Slovak Spectator. “It’s good news that citizens' participation and trying to change things for the better is meaningful.”

However, the Supreme Court’s decision also caused that Pezinok follows its old master plan from 1997 which counts with a landfill. The town has been struggling for eight years to create a new one which would not allow a new landfill site.

“State bodies are complicating our lives by not providing statements on new land use plan,” Solga said. “To be more specific, they are not even bothering to respond [ to our requests].”

This is also the reason why the state should change the legislation concerning land use plans, according to Imrich Vozár of  Via Iuris. He specified that communities should be able to veto investments worsening their quality of life. At the same time authorities should have the possibility to reject a veto, but in costs of compensation for citizens.

Nevertheless, it is natural that such a big investment is influencing events and lives in the town even after the whole cause ended, according to Čaputová.

“First of all, the approval for a landfill site is cancelled, it is closed and waste cannot be stored there,” Čaputová said. “This is the most important thing in the whole case.”