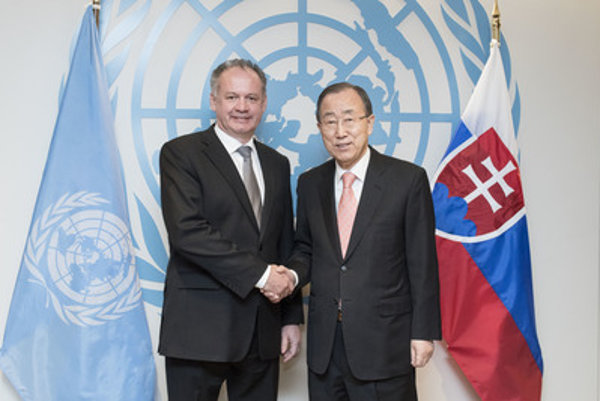 During the plenary session held in attendance of UN Secretary General Ban Ki-moon and heads of states, Kiska labelled the agreement a historical milestone. “The world has got new hope,” Slovak president said, according to the TASR newswire. “By signing the agreement, we are confirming our determination to act jointly. A fast ratification of the agreement should be the next step. We cannot lose time, since there is a lot of work ahead of us.” Kiska pointed to the upcoming Slovak EU Presidency that will also seek  to implement the agreement as soon as possible.

He also mentioned Slovakia’s commitment as an EU member state to reduce, by 2030, emissions by 40 percent compared to 1990. "Cutting carbon dioxide emissions is not a matter of choice,” Kiska said, as quoted by the President’s Office. “We know that our production and consumption must be more sustainable, more energy efficient. Let us look closer at the enormous possibilities of technologies and innovations."

The agreement is the result of the UN Conference on Climate Change held last December in Paris. A record-high number of 171 countries are inking the agreement in the UN headquarters in New York on April 22. This is a new international agreement on measures against climate change whose long-term goal is to keep the global temperature from rising more than 2 degrees Celsius, calibrating from temperature levels of some 250 years ago when the industrial era began. Some countries are striving to limit that rise to 1.5 degrees Celsius.

In order to take effect, the agreement needs to be ratified by individual countries. At least 55 countries that are responsible for at least 55 percent of global greenhouse gas emissions are obliged to do so. Nevertheless, the Paris document will not take effect before January 1, 2020. As soon as all the ratification procedures are met, the Paris agreement will replace the Kyoto Protocol signed in 1997. The deadline for completion of the ratification procedure is April 21, 2017.

On the same day, Kiska held talks with UN Secretary General Ban Ki-moon. Contents of the Paris climate change agreement were high on the agenda. The two officials called for the agreement’s ratification so that it could take effect as soon as possible. They also discussed the election of the new UN secretary general, as well as the refugee crisis. Meanwhile, Kiska informed Ban Ki-moon that he will take part in the World Humanitarian Summit in Istanbul. The former also met the President of the UN General Assembly, Mogens Lykketoft on April 22.

The agreement was subsequently advanced for the Slovak government session with a proposal for its ratification.