Michaela Terenzani
Food festivals are a good way to get acquainted with the latest trends. (Source: Courtesy of Košice Gurmán Fest)

This regularly updated article on Slovak cuisine includes information on trends and tastes in traditional and modern Slovak cooking. 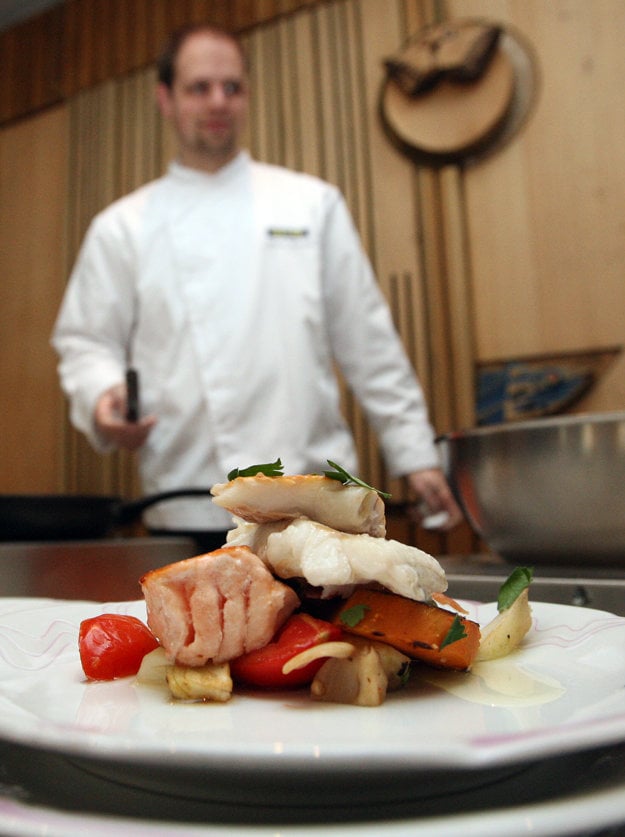 The scent of freshly-baked bread, the colourful stalls of the vegetable market, the cute little jars of home-made jam and other back-to-the-roots, vintage and home-made items have a reviving effect on the contemporary Slovak cuisine.

If you never thought Slovak food could be hip, think again.

“The Slovakness is in the local, and in the seasonal,” said Ján Minárik, a professional chef. There is hardly any dish that one could call explicitly Slovak, he said, because the cuisine of the Austro-Hungarian Empire has been mixed and shared, and now most recipes are the same or very similar for Slovaks, Czechs, Hungarians, Austrians and even Poles.

Chefs in some Slovak restaurants set out to discover the recipes of their grandmothers, twisting them with the modern technologies to come up with meals that satisfy both the demand to eat light and the desire to eat local. Though light is unlikely to be the first word that comes to mind when thinking of traditional food, first impressions are often wrong. Slovak food is much more than greasy meat, goulash soup, and heavy potato dumplings.

Slovaks go back to the roots

The secrets of grandmothers’ recipes do not lie in complicated combinations of flavours and ingredients or in super-sophisticated cooking technologies. It is the forgotten ingredients that Slovaks once ate on a daily basis that are now making their way back to the kitchens.

“Nowadays, the trend of the return to the good old things prevails, in [the selection of] ingredients as well as in preparation of the food,” said Jana Jindrová, who in the past was responsible for communication of modern Slovak cuisine concept in the restaurant of Hotel Arcadia.

“People used to make their meals of what was handy and abundant, and each region of Slovakia has something specific in its traditional cuisine,” said Jaroslav Uhlár, professional chef and member of Gourmet Club, which connects professionals operating in the gastronomy segment. In the mountainous regions meals were based more on cabbage-like vegetables and potatoes, while in the lowlands people ate the more colourful vegetables they were able to grow in their fields, he noted.

In the old times, Slovaks used to eat potatoes and cabbage, as well as legumes, which are less frequently on the menus of Slovak restaurants today. Even more scarce are buckwheat, millet, and rutabagas. Sheep milk and lamb meat, as well as various kinds of game, were also much more common in the past.

Fish might not be the first thing that comes in mind in connection with Slovak cuisine, but Minárik notes that there has been a tradition of fresh-water-fish-breeding in Slovakia, and these are now part of his meals as well. Mascalonge is one typical Slovak fish, but there are also places breeding rainbow trout or salmon trout.

“I like fresh fish, so I would have the pikeperch,” Minárik said when asked about his favourite Slovak dish. The pikeperch, served grilled with carrot purée, sunflower seed cake, fresh spinach and watercress sauce on the side is, in fact, his signature dish.

“It is often about old recipes renewed in a contemporary way, using the genuine Slovak ingredients,” Uhlár said. He also mentioned using bryndza, or quark (tvaroh), to create a French-style mousse. 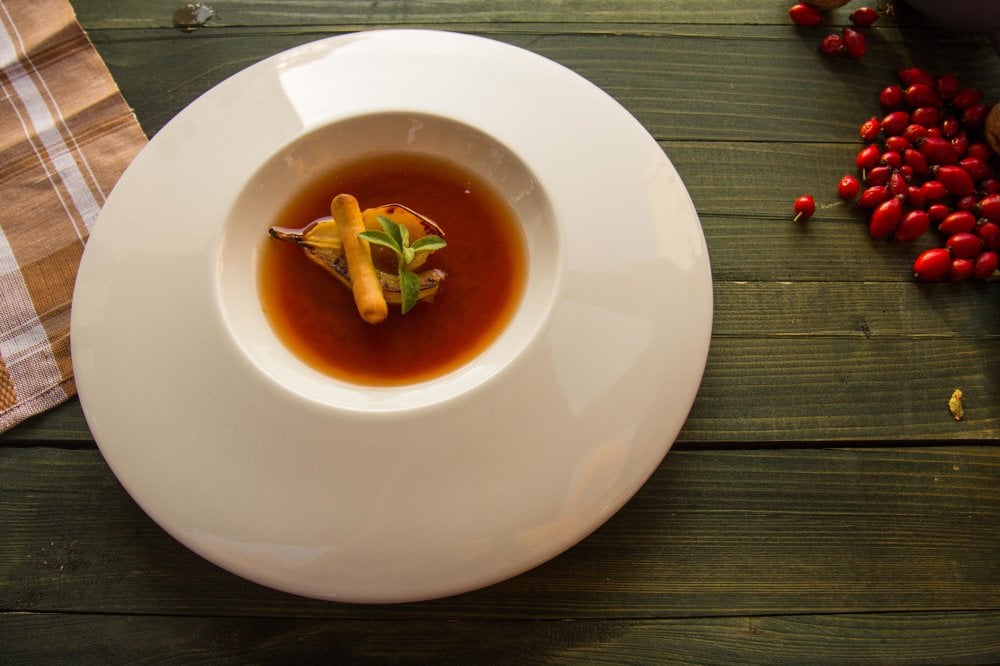 A soup from rosehips with red wine and pear (Source: Katarína Hudačinová)

“The contemporary Slovak cuisine uses traditional meals too, only they are adjusted, divided, transformed into a new state. In the end the taste remains and only the appearance changes,” Uhlár explained, adding that skilled chefs can be really creative in doing this. The results could be very original meals with the traditional touch. Uhlár listed quark as a cream with linden infusion, traditional pork ribs with onion jam or the šúľance potato-gnocchi-style pasta with cream and butter with wild-thyme. Soups are traditionally an important part of lunch or dinner in Slovakia too, according to Minárik, who claims that people should not abandon the habit of eating soups, and suggests that tourists in restaurants should also give the soups a go.

“A good soup warms up the stomach for the main course,” Minárik told The Slovak Spectator. In winter the soups are considerably heavier, such as potato cream soup, while in spring, options include vegetable soup or a green pea soup. 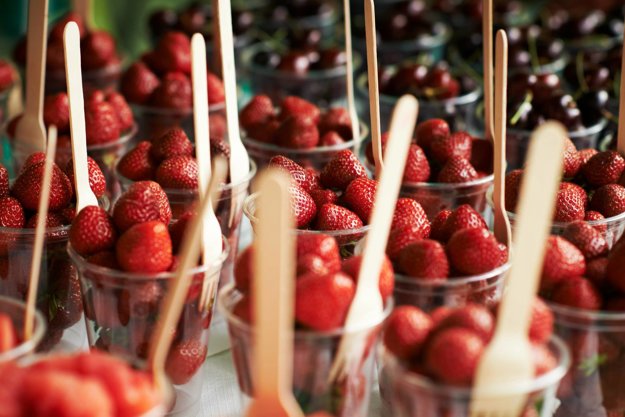 Perhaps surprisingly (at least for the French), chefs and gourmets agree that Slovak cuisine may be compared to French.

“The French cuisine uses a lot of meat, but is able to combine it excellently with proper side-dishes,” Jindrová said, adding that one thing that French and Slovak cuisine have in common are legumes.

In fact, legumes were among the most-common foods in Slovakia in the past. Think of the traditional bean soup or the so-called hŕstková polievka, or handful soup – made of a mixture of legumes: a handful each of beans, dried peas and lentils.

“As if we were ashamed that we can cook beans and lentils, yet it is exactly what people want,” Jindrová said.

No country for vegetarians?

In the same way as other Europeans, Slovaks feel the effects of a sedentary lifestyle and want to eat light food to help compensate.

“A vegetable salad has never been typical for Slovak cuisine and never will be, so there it is a bit harder and one needs to combine,” Jindrová said.

The first thing tourists usually hear about Slovakia is the rumour that it is not a place for vegetarians.

“There is something to it,” Uhlár admitted. “We do like to have some home-made tlačenka [a sort of porkpie], smoked ribs, or a good baked duck.”

Uhlár however was quick to add that this does not mean a vegetarian has to die of hunger in a Slovak restaurant. There are, for instance, various ways to work with cheese, such as grilling the smoked sheep cheese known as oštiepok or using the local vegetables and mushrooms with potatoes as a gratin.

In some places you can find a Slovak salad which consists of traditional sheep cheese bryndza, shallots and seasonal vegetables. 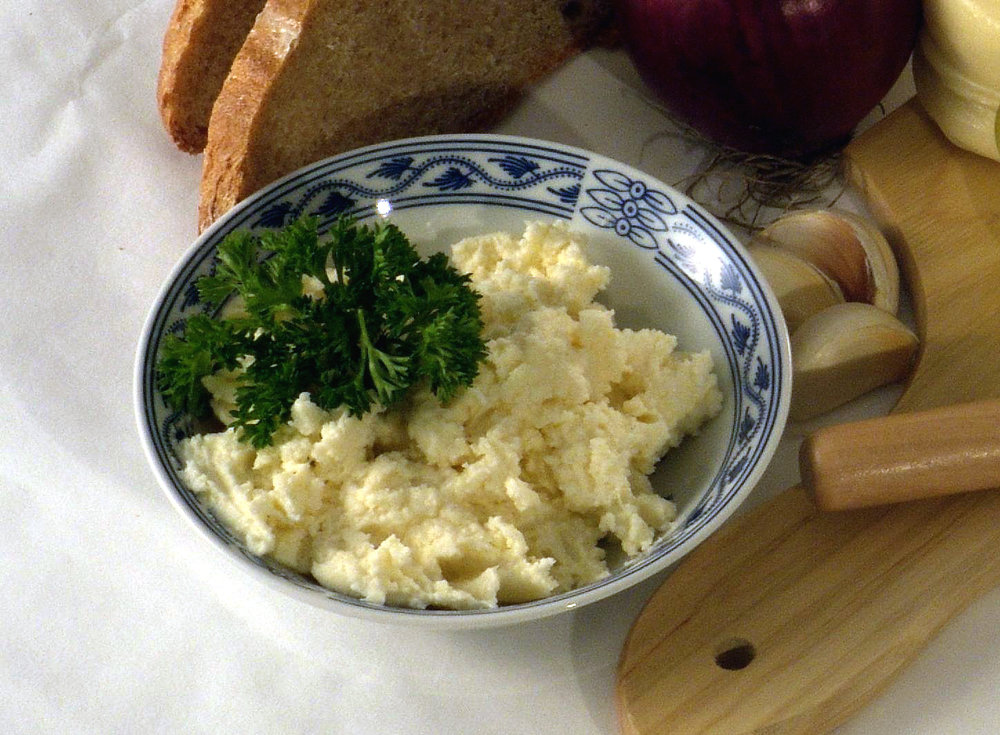 In recent years, Slovaks have begun following the trend of enjoying home-made products, which go by the term "fait maison" in the world of cuisine. 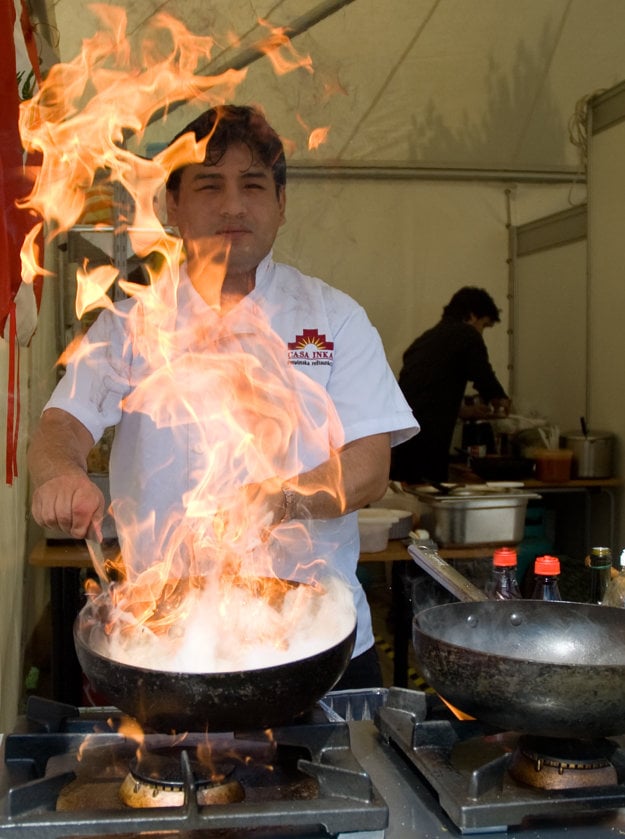 “That means that everything I can, I make at home,” Jindrová said. In the restaurant it means, for instance, that when the chef makes the home-made buckwheat tagliatelle-style pasta, he not only makes the pasta by himself, but he also grinds the flour in his kitchen. Very often this requires both expertise and passion for cooking. While it is not extremely difficult to find a cook wishing to explore the possibilities of the Slovak cuisine in a contemporary style, it is often hard to find high-quality ingredients.

For instance, finding a good-quality bakery that could supply you with their products based on your needs may be difficult to do.

There are however exceptions that suggest Slovakia’s producers are waking up. For example, one can find a small biofarm close to Dunajská Streda in south-west Slovakia, where the owner makes her own fresh goat butter and French- and Dutch-style cheeses.

The demand for such products is growing among consumers in Slovakia. People want traditional, home-made food when buying groceries: they go to the markets to buy their garden-grown vegetables. They go out to find small farms selling fresh eggs and meat.

Going fresh and local in the contemporary Slovak cuisine also means going seasonal. Mid-spring is the season of asparagus. This vegetable is not traditionally a common part of Slovak meals, yet there is a big asparagus-producing area in the region of Záhorie, on the border with the Czech Republic.

“We should learn to eat what we’ve got here,” Minárik said.

Where to look for recipes
Contemporary Slovak meals with a touch of tradition might be worth a try at home. Many of them take no more skill than that of the average cook.
The Bake your Slovak Roots bilingual food blog is a good resource for those who do not know the Slovak language. The author sticks to contemporary and everyday approach to Slovak cuisine. If you feel like trying the typical Easter-style hrudka cheese or a glass of hriatô on a cold winter night, this blog is the place for you (slovakroots.blogspot.sk).
The Emperor’s Crumbs blog also has a section on Slovak food with a more traditional approach. You can find the recipes for a complete Slovak-style Christmas dinner here. The blog is written in English. (www.emperorscrumbs.com/tag/slovak)
Bonvivani website is put together by a network of contributors who upload family recipes of meals commonly eaten in Slovakia: you can find everything from soups and main courses to desserts here. (www.bonvivani.sk)