While Marek Svatoš was considered a huge talent, he suffered frequent injuries which hindered him from gaining notable success. 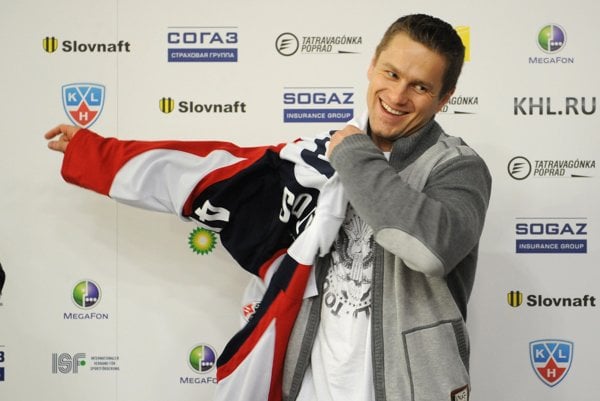 Marek Svatoš after the signing of the contract with Slovan Bratislava in 2013. (Source: AP/TASR)
Font size:A-|A+

Former Slovak ice hockey striker, Marek Svatoš (34) died in Denver, USA, where he lived with his wife and two children. The official fan club site of the NHL team, the Colorado Avalanche, where the player spent the bulk of his career was the first to confirm the information about his death, the Sme daily reported.

While the fan club Eurolanche did not provide further details on its Twitter account, Nový Čas daily wrote that, according to a close family member, Svatoš overdosed on prescribed medicine and subsequently died of cardiac arrest.

Svatoš was considered a huge talent at the beginning of his career in Košice. The Colorado Avalanche drafted him in 2001 when he was only 18 years old and included him in the NHL team for four matches in the 2003/2004 season.

Though he was a regular player in the first team between the 2005/2006 and 2009/2010 seasons, he suffered from frequent injuries all through his career. In 2006, he fractured his right arm. In the following season he had trouble with his abdomen. The next year he had an injured knee, then later an injured hand and thoracic pain, Sme wrote.

In addition, he played with the Kontinental Hockey League (KHL) in Omsk where he played with Czech star Jaromír Jágr and later he also played for the NHL teams the Nashville Predators, the Ottawa Senators but missed out a training camp with the Florida Panthers. In the NHL, he played a total of 358 matches scoring 102 goals and added 77 assists.

Svatoš represented Slovakia at the 2006 Winter Olympic Games in Torino and also started at the 2010 World Championship in Cologne. When he came back to Slovakia in 2013, he played six matches for Slovan Bratislava and then went back to Košice where his team won the Slovak league title. After this success, he ended his career and moved away to the USA.

“In Košice we got a chance as young players, Marek was 16 years old and clearly showed how much talent he had,” said Gabriel Spilar, as quoted by Sme. “I remember how we went to meetings together as Košice trainees.”

While former Slovak back Richard Lintner expressed his condolences through his Facebook page, goalie Július Hudáček pointed out that Marek was much too young for death.

“He had a family and just suddenly went,” said Hudáček, as cited by the TASR newswire.