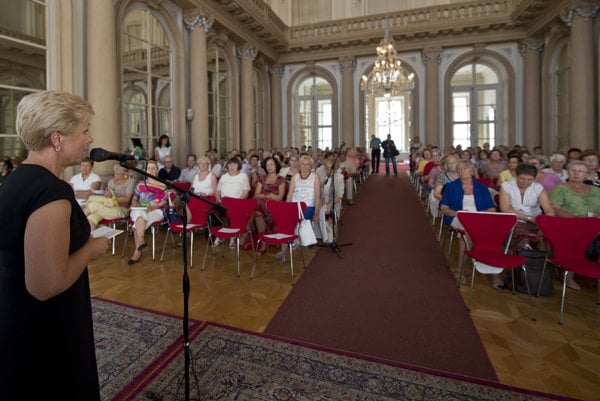 Interest in Bratislava as a tourist destination is increasing. While the number of visitors has already surpassed one million this year, Bratislava city council would like to see more congresses and meetings held here. To lure more business clientele to the Slovak capital it is offering the Glass Hall in the Primate’s Palace as a site for cultural and social events accompanying business congresses or conferences.

“We can again report a record inflow of tourists,” said Bratislava Mayor Ivo Nesrovnal in mid November as cited by the TASR newswire. “While about one million people visited Bratislava last year, this year we have already surpassed the million level in October.”

Most tourists arrive from the Czech Republic, Germany and Austria. The number of visitors from Spain and Russia have increased by tens of percents this year too.

Alžbeta Melicherová, the head of the board of directors of the Bratislava Tourist Board, specified that during the January-October period the number of visitors to Bratislava increased by almost 17 percent y/y. In terms of nights spent in Bratislava, these increased by more than 17 percent. The sale of the tourist Bratislava City Card increased by 20 percent when compared with the same period in 2015. The city also registered an increase in cyclo tourism and an increase as high as 150 percent in hits to the website visitbratislava.com presenting Bratislava as a tourist destination.

Statistics show that visitors are also spending more time in Bratislava as there is a decrease in the number of one-day tourists. Now tourists are on average spending 2.2 nights in the capital.

“The [growth] pace is slow, but numbers keep increasing,” said Melicherová. “This is our long-term goal.”

The increase in nights spent in the capital also means more money in the city’s pockets as collected taxes for accommodation increases. While Bratislava collected €3.1 million in accommodation tax last year, during the first half of the current year it had already collected €2.3 million.

Bratislava would like to see more business visitors as MICE (meetings, incentives, conferences and exhibitions) tourism is the most lucrative part of the industry. As Nesrovnal pointed out this area of tourism has a high added value because much more money is spent on it. It also brings a different clientele to the city.

This is the reason why Bratislava city council decided to offer the Glass Hall in the Primate’s Palace as a site for cultural events related to MICE tourism.

“Many business persons active in MICE tourism were telling us that Bratislava does not have such representative rooms in which participants of congresses may meet at a high level,” said Nesrovnal, adding that the Glass Hall certainly is such a premisis.