The Slovak team of four beat over-confident Germany, Italy and Switzerland losing only to France to take the first-ever medal in this competition. 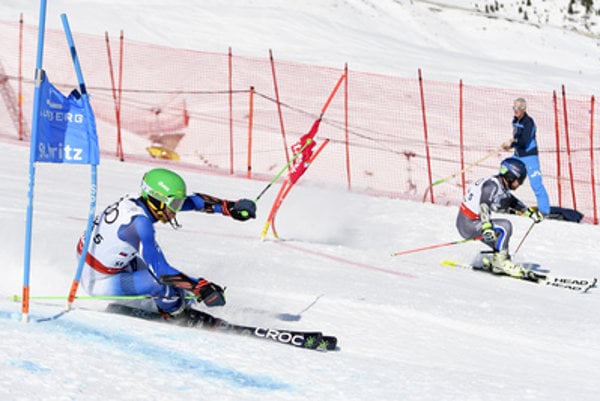 Of the four Slovak skiers who competed in St Moritz in the Alpine skiing teams' competition, Matej Falat was an outsider who has never finished a race in the World Cup and usually ends up in the bottom part of the results table. However, he started the finals of this World Cup as part of a team fighting for a gold medal and he gave the performace of his life. It was also greatly thanks to him that Slovakia won the silver in a very close race, losing by a mere eight hundredths of a second, the Sme daily wrote.

“We had not counted on this, although we believed that we could get a good result,“ Falat said. „It is smashing to win a medal at the World Cup. Our girls were tremendous.“

And truly, as expected, it was mostly women who pulled the team to victory. In the qualifying competition for the parallel slalom, Veronika Velez-Zuzulová and Petra Vlhová won all their races and they were complemented by Falat who replaced the injured Adam Žampa at the last moment.

In the early rounds, it was Falat, aged 24, who beat the German favourite, Felix Neureuther, current No 5 in the World Cup who specialises in the slalom. The Slovak team qualified after a 3:1 victory over Germany – which did not use its best skier, Linus Strasser, keeping him for the next round.

In the quarter-finals, the Slovaks beat Italy by the same margin. In the semi-finals, only Velez-Zuzulová and Vlhová beat their Swiss rivals but with the 2:2 draw, the Slovak team qualified again thanks to the better combined times of their best woman and best man, winning by six hundredth of a second.

The Slovak team also finished with a draw in the finals. After four races, the result was 2:2 with France but the French had a better combined time, winning by eight hundredths of a second.

Andreas Žampa did not win a single race in the whole competititon but it was thanks to his time in the semi-finals that Slovakia made it to the fight for gold. His brother Adam, considered a favourite, was injured and could not ski. It appeared that with Falat, Slovakia could not even dream of a medal but the seeming outsider became an unexpected hero, Sme wrote. The injured Adam Žampa and junior racer Tereza Jančová did not compete but were on the team list so they also received medals.

The Slovak skiers rejoiced after the competition. „Each one of us in the team had a different colour of ski-suite but we all have the same heart – Slovak. This is the most important thing,“ Velez-Zuzulová reacted for the public RTVS TV channel.

„We were considered outsiders by all but we showed them that anything is possible,“ Vlhová commented. „We are happy; it is great for Slovakia to have a medal. We all gave excellent performances.“