As the pool of people to fill vacancies shrinks, salaries rise. 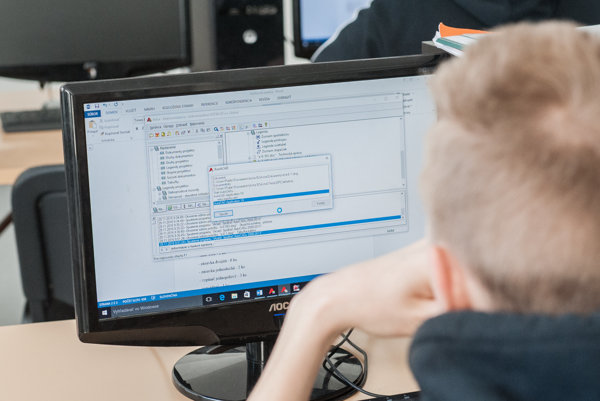 The shortage of qualified workers might be bad news for employers, but less so for employees who have seen their salaries rising as a result.

In their efforts to fill vacancies, companies offer sound remuneration plus financial and nonfinancial benefits. Despite this, the cost of labour remains far below the EU average in Slovakia, and is set to remain so even though wages have been growing faster than the EU average.

On the other hand, the third government of Robert Fico uses the economic growth that has exceeded 3 percent in the long run, as a reason to raise the minimum wage. Employers would however like to see it grow based on a formula that would take into account various indicators, like GDP growth or inflation.

Employees in the category of qualified workers saw their average basic wages increase the most in 2016 – by 6 percent to €663 gross per month. The increase in wages of supporting staff and qualified technical workers was also above the average of 5.6 percent, up to €537 and €1,044, respectively.

“This increase in wages may result from the lack of qualified labour force in industry and retail,” said Miroslav Dravecký, product manager of Platy.sk. Slovakia shares this experience with neighbouring countries, like the Czech Republic and Hungary.

On the other hand, top managers witnessed the lowest annual growth in salaries, by only 2 percent, to €2,381.

“The important part of top managers’ salaries are financial benefits in the form of rewards, which are the most typical and most generous at managerial positions as they often relate to achievement of certain goals,” said Dravecký.

Rewards were very generous in 2016, the analysis shows: 44 percent of top managers across Slovakia, including in small companies, say they receive year-end bonuses of double their basic monthly wage.

The IT sector also continues to remunerate its employees the most: employees earn 23 percent more than the national average. That sector is followed by shared service centres and pharmaceutical companies.

“Basic wages in shared service centres achieved one of the highest levels, and thus this sector ranks among the three best paid sectors in Slovakia,” said Peter Lackó, senior manager and leader of HRS department in PwC Slovakia.

On the other hand, wages grew the slowest in logistics and shipping, up 1.8 percent, and energy and financial services, both 2.7 percent. 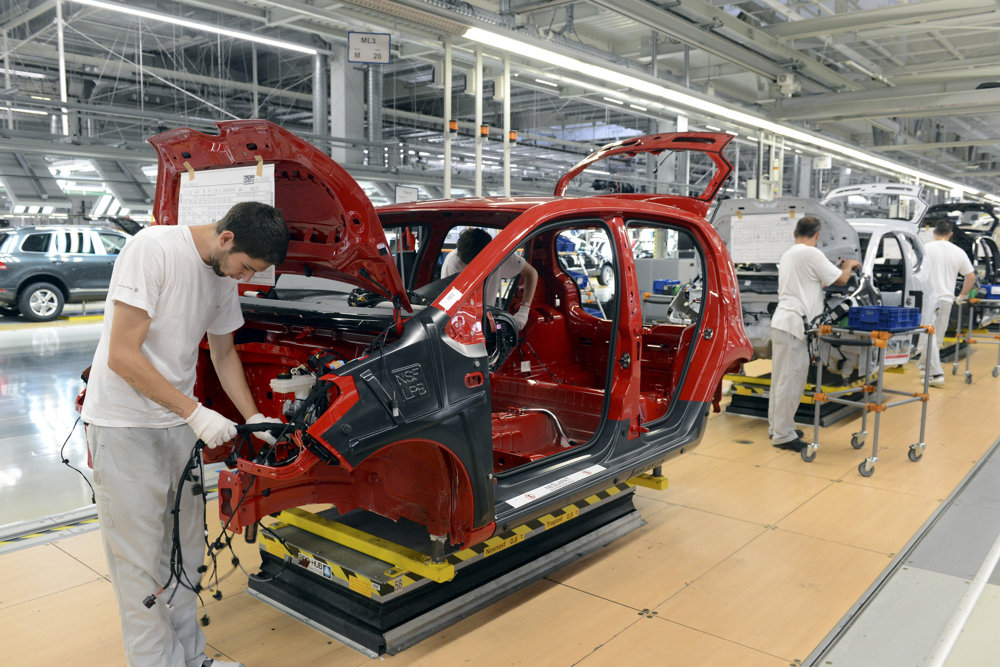 Slovakia again broke records in car production in 2016 when the three carmakers, Volkswagen Slovakia, Kia Motors Slovakia and PSA Groupe Slovakia, produced more than 1.04 million cars. While some commented on this result saying that the carmakers in Slovakia achieve such good results only thanks to the low wages they pay their workers, the opposite is true. All three carmakers pay their workers, excluding management, significantly above the average monthly wage in the business sector, €883 in 2015, based on the Slovak Statistics Office.

Employees of the oldest carmaker in the country, Volkswagen Slovakia, received an average gross wage of €1,795, including the 13th and 14th salary and rewards for the economic results of the plant in 2015, Lucia Kovarovič Makayová, spokesperson of Volkswagen Slovakia, told The Slovak Spectator.

At Kia Motors Slovakia near Žilina, the average wage of workers in production, including all benefits, amounted to €1,350 in 2016, according to Dušan Dvořák of Kia. At PSA in Trnava it was €1,331 in 2015, Peter Švec, the plant’s spokesperson, informed. As two of the three carmakers are located in western Slovakia where wages are generally higher and the lack of qualified labour is expected to intensify once Jaguar Land Rover launches production near Nitra in 2018, the pressure on wages will increase too.

Švec confirmed that PSA feels the pressure on wages from the part of its workers.

“Simultaneously, we are considering how to make other motivating factors more attractive because the pay hike works only for one quarter of the year,” he said. 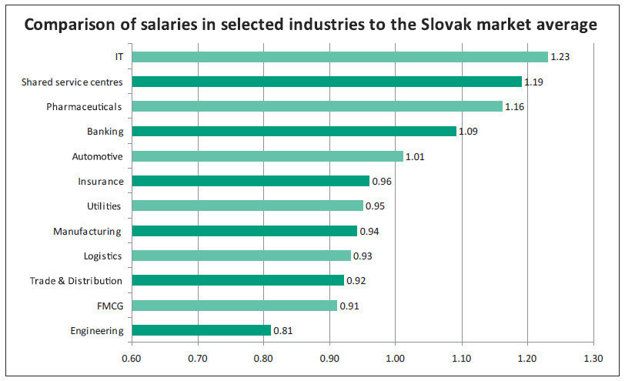 In fact, all three carmakers offer benefits like free commuting, accommodation, or better leasing conditions when acquiring a car.

Negotiations with trade unions also prove the pressure from workers on higher wages. While Švec refused to specify what pay hike they are negotiating in collective bargaining in Trnava, trade unions at Volkswagen want to use the positive economic development to ask for a significant pay hike of 16 percent during negotiations for the new collective agreement. The current one will lapse in March 2017.

“Based on good economic results the plant can afford such a steep increase in wages,” said Zoroslav Smolinský, the head of local trade unions, as cited by the Pravda daily.

Labour costs up, but still far below EU average

Even though labour costs in Slovakia are growing faster than the EU and eurozone average, they are still low compared with older EU members. While labour costs amounted to €10.1 per hour in 2015 in Slovakia, an increase by 3.5 percent y/y, the EU28 average was €25, up 2 percent y/y, according to Eurostat.

Radovan Maxin of AZZZ sees the general, growing trend as important and points out that although Slovakia is still below the EU average, it already has higher labour costs than its Visegrad Group neighbours.

“We are catching up with developed European countries,” said Maxin.

Vladimír Vaňo, head of CEE research at Sberbank Europe, points out that it’s important to recognise the different base from which this indicator started to evolve after the fall of the Iron Curtain, when compared with the western Europe.

“The growth of labour costs on the other hand reflects the more dynamic development of the productivity of labour,” said Vaňo. This is influenced by both imports of technology and the changing structure of the economy, as the more competitive industries with higher added value “squeeze out the less competitive ones”.

Luboš Sirota, board chairman and CEO at McROY Group, also warns that the growth of wages should not exceed the growth of labour productivity in the long term, otherwise the pressure for automation and replacing people by machines will increase.

“Slovakia is the country with the highest share of work places endangered by automation and digitalisation, at more than 45 percent,” said Sirota citing an OECD study.

The minimum wage in Slovakia keeps increasing. In 2017 it stands at €435 per month, up €30 compared with 2016. Again, after the cabinet, trade unions and employers failed to agree on the hike as employers were willing to accept an increase only up to €430, it was the cabinet of Prime Minister Robert Fico (Smer) which made the final decision.

For now there is no such scheme and the cabinet has the last word if the tripartite (the cabinet, trade unions and employers), fail to agree on an annual increase.

Since 2012 the minimum wage has increased by €107.8. The ambition of Fico’s third cabinet is to hike the minimum wage to €500 by 2020, while Labour Minister Ján Richter can even imagine exceeding this level in 2019.

“The development so far has shown positive impacts on the growth of workers’ incomes, widening the gap between income from work and from social benefits and on consumption of households,” Minister Richter told The Slovak Spectator.

On the other hand, employers point out that the minimum wage raises are based on political decisions and warn that too much of an increase may harm the economy and the labour market.

They also note that the amount of the minimum wage affects also sectors with higher wages as it serves for calculation of payroll taxes and others.

“The minimum wage grows for political and not economic reasons, i.e. due to the growth of labour productivity,” Peter Kremský, the executive director of the Business Alliance of Slovakia (PAS) told The Slovak Spectator. This pushes many workers with low wages onto the black market, as in consequence companies do not pay taxes and compulsory premiums for them.

“Instead, they pay them illegally in cash,” Kremský said.

Róbert Chovanculiak of the economic think tank INESS points out that the minimum wage has grown faster than other wages in industry over the last few years. While it accounted to about 50 percent of the median wage six years ago, currently it is 60 percent and even 70 percent in Prešov Region.

“The minimum wage is growing faster than the economy and this causes problems for employers,” Chovanculiak told The Slovak Spectator.

The business sector sees the cabinet’s plan to increase the minimum wage to €500 by 2020 as a political decision.

“Wages certainly must go up because there are enough jobs and lack of labour, but this should happen via economic tools and not by political decisions,” said Kremský.

Chovanculiak recalled that a minimum wage of €500 would mean costs per worker of almost €680, making the creation of a work place for a less productive person significantly more difficult.

Again the idea has emerged to introduce a sectoral minimum wage, i.e. different, for example, for the clothing industry and the automotive sector. Kremský agrees and points to the clothing and food industries, which he believes should have lower wages.

“Otherwise we are expelling them from Slovakia,” he said.

Chovanculiak is afraid that a sectoral minimum wage would not mean its reduction in some sectors, but an increase in others. This would even worsen the impact of the minimum wage.

“A much better solution would be introducing regionalised minimum wage which would enable people in poorer regions to reduce their payroll taxes,” said Chovanculiak, adding that this would not only increase their net wages but also reduce the wage costs of employers.

The Federation of Employers’ Associations (AZZZ) can also imagine different minimum wages for different sectors, but it would primarily welcome the predictable growth of the minimum wage based on indicators like inflation, economic growth or labour productivity.

“Based on such a formula, each employer would know what they can expect in the next period and could better plan wage costs as well as the pricing of products in general,” said Radovan Maxin of AZZZ.

University graduates demand a monthly wage of €935 on average, up by €9 compared with 2015, as stated by the Profesia.sk job portal in June 2016. The requirements range between €741 (theology) and €1,113 (IT) depending on the field. In general, graduates of the Slovak University of Technology in Bratislava (STU) have the highest expectations and graduates in humanities and pedagogy the lowest.

“Graduates arriving on the labour market require from the employer a good salary, benefits and flexibility,” Ivana Molnárová, executive director of Profesia, wrote in a press release in June 2016. “They are self-confident and not afraid of discussing the conditions [of work] and they care for what employer they will work.”

Companies in sectors of trade and distribution, IT and the automotive industry plan the highest increase in basic salaries ranging between 4.1 and 3.6 percent in 2017, indicates the PwC PayWell 2016 study. On the other hand, those in banking and energy plan the lowest increases, 1.7 percent and 1.5 percent, respectively. On average, employers plan to increase wages by 3.2 percent.

“Based on experience from previous years companies are rather careful when planning future pay hikes,” explained Peter Šmatlák, manager of the department for consultancy for HR at PwC in Slovakia. “They plan certain increases of basic salaries according to their current strategy and financial situation. But the real increase may be higher or lower depending on the real results of the company.”

Read more articles by the topic
This article is also related to other trending topics: IT, Automotive