Slovakia to be flooded by Roma is a hoax

​​​​Here is the overview of the hoaxes and fake news that appeared on the Slovak internet over the past week. 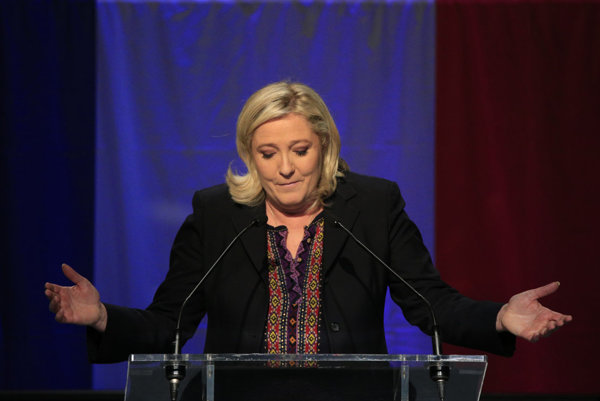 “They want to make Le Pen a criminal”

The European Parliament stripped French nationalist politician Marine Le Pen of her MEP immunity. “Mainstream” media made a deal with Facebook and Google to prevent Le Pen from winning the French presidential election. This is the intro of an article by the Czech “alternative” website Aeronet.cz, which spread throughout social networks. Unlike the intro, the rest of the text tells a true story.

The European Parliament really did vote to strip Marine Le Pen of her immunity. This was due to the fact that she published pictures of murders committed by extremist organisation ISIS on her Twitter account, which is a violation of French law.

In a separate development, one month before the vote, two initiatives emerged in the EP to identify and explain hoaxes and fake news on the internet. Facebook, along with the established world media, wants to mark and bust lies. Google too announced the launch of their CrossCheck system with a similar ambition.

After their experiences with the American presidential election, they now want to focus on the election in France.

The point of both projects is not to exclude Le Pen from the competition, but rather to prevent that the public opinion and the election results are influenced by hoaxes and “alternative facts”. Le Pen goes on campaigning, she would only have to withdraw from the election if she was condemned.

The article from the conspiracy website demonstrates logical and journalistic mistakes that can help the reader to uncover a hoax when they do not have facts at hand. Sentences like “We all know very well, that…” are suspicious. They refer to a non-existent authority, which is a flaw in logic. When reading the article carefully, we can also find the problematic sources of the article. Most of them are Breitbart News, which emerged as a conservative website but moved towards the far right and has a history of publishing fake and misleading news.

The third signal is that almost every sentence that cites some fact is followed by a commentative sentence that does not refer to any source.

The UK will soon close its borders to EU citizens; Czechia and Slovakia will face an influx of people who will return, dissolve the social system, and provoke a humanitarian disaster.

The Czech website Aeronet.cz paints such a catastrophic picture and the author warns that most of the people coming back will be Roma. The website refers to the alleged plan of PM Theresa May to close the borders after the UK officially requests to leave the EU in March. The laws for entry will then resemble those which American President Donald Trump has introduced for six Muslim-majority countries.

In reality, the author of the article merged several pieces of news into one text, which are based on well-informed sources, on real statements, but the mixture of them is not true at all.

British media actually brought the news that the Brits might limit freedom of movement in the EU already in March. But the measures should not concern those people who already live in the UK, and it will also not mean closing their borders. Freedom of movement in the EU also means the freedom to travel, which the UK government does not plan to limit in any way. Unlike Donald Trump’s new immigration ban.

If the UK really partially limits freedom of movement, it will concern the rule that every EU citizen has the same rights for residence and work in the UK. That means Slovaks would have to request a work and residence permit in the UK after the changes are implemented.

The Brits, however, do not want to send home those EU citizens who are already in the country, according to information published by the media. Not even Breitbart News, which Aeronet.cz cites, states that.

Plan to get rid of Trump

The Democrats have a plan to get rid of Donald Trump in the US. They will cooperate with Facebook to prevent the spread of unwanted news, and this will result in impeachment, the Hlavne Spravy website wrote.

The very introduction of the article states that “they pulled a heavy calibre in the fight against Trump, the criticism of the president has increased and a negative picture of him in the media is being formed…”

The text suggests that media are behind all this, who in cooperation with the Democratic Party have the task to create a negative picture about the activities of the current American president and thus achieve impeachment.

It also claims that Trump’s critics have decided to form a team in order to control Trump and his relations with the leaders of other states and cautiously watch over every step of the new administration. They have already announced that they would closely cooperate with Facebook and social networks to prevent unwanted news from spreading.

Such claims are of clearly conspiracy character and the statements are impossible to check. The article does not refer to any sources of information, which proves that the article intends to deceive and mislead readers.

The authors also accused the Democrats of censorship, and at the same time they accuse Facebook of interfering with the rights of users. They also blame the police of EU states and the US of constant pathetic surveillance of social network users, and thus violation of their freedom of speech. The article claims that these people are leaving Facebook and creating accounts on Russian social network vkontakte.ru, where they are under the surveillance of the Russian police, but that “does not limit the rights of the users in the same way as Facebook does”.

This is again an impossible-to-check claim that uses the well-known and widespread conspiracy claim: the mean “West” vs. the good “Russia”.

(By Tomáš Čížik, director of the Centre for European and North-Atlantic Relations)

Another widespread myth suggests that the bigger number of children in Muslim families is a targeted attempt of the Muslims (or other groups of citizens) to impose their opinions and way of life in Europe. Also Archbishop Stanislav Zvolensky spoke about the Muslims outnumbering the rest of the population at the recent conference, Religion and Migration.

The findings of sociologists, however, show that the birth rate is not so much linked with culture as it is with the level of economic development in the country. The more developed a country, the less people desire a numerous family.

For instance, Saudi Arabia is an absolutist monarchy that has the sharia law implemented in its legal system. Despite that, local experts are trying to find how to stop the birth rate from dropping, since it dropped from 3.6 children to 2.8 children per woman between 2004 and 2014. The reason is that the country belongs among the richest countries in the world, and young people first focus on studies, then on their career, and they only go on to start a family later on. The same goes for countries in Europe.

The most significant argument against the claim that Islam leads to a higher birth rate is the situation in Iran. In 2015, the country had the same birth rate as the US and lower than France.

Local sociologists explain this by citing the significant rise in quality of life and the unwillingness of young people to get married. Young Iranians simply want to enjoy the bounties of the modern world and do not think of family.

Currently, the highest birth rates are in the poor parts of Africa.

It is true that the number of Muslims in Europe has increased, also thanks to their above-average birth rate. But studies show that every generation of descendants of migrants has less children than their parents did. The pre-refugee crisis estimates suggested the birth rate among Muslims will match that of the majority around 2050.