One-fourth of students to be lost to brain drain

A total of 18 universities and 489 students from various fields of study have participated in the survey.

Almost 24 percent of Slovak students plan to leave Slovakia either for the long term or permanently, with another 18 percent determined to leave for a shorter duration with the prospect of returning within a year, according to a survey mapping the emigration intents of Slovak university students.

A total of 18 universities and 489 students from various fields of study have participated in the survey carried out since last year, the TASR newswire reported.

The collected data suggest that 22 percent of students do not plan to leave Slovakia, 36 percent remain undecided and 5 percent have never given the issue any thought. 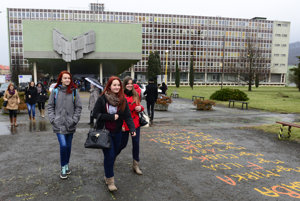 The international study into the emigration intentions of university students in Slovakia, the Czech Republic, Lithuania, Belgium, Bulgaria, Hungary and the Ukraine is coordinated by the Faculty of Philosophy at the Pavol Jozef Šafárik University (FF UPJŠ) in Košice.

The survey also showed there are a number of potential socio-psychological factors that influence the emigration decisions of university students, TASR reported.

“These include a higher willingness to take risks, openness towards new experiences, the need for change, emotional unhappiness and a negative perception of the economic situation prevailing in Slovakia,” said professor Oľga Orosová and PhD student Marta Kulanová of FF UPJŠ, who coordinate the survey, as quoted by TASR.