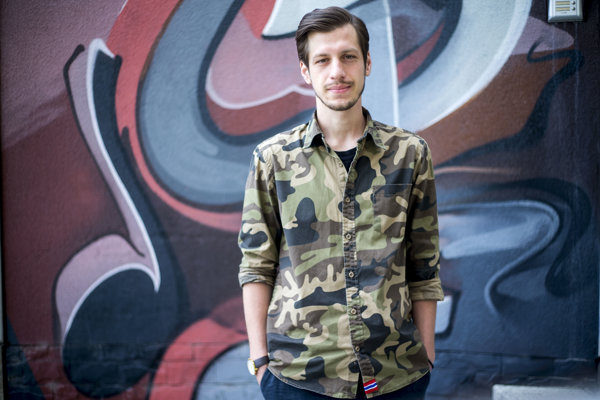 To begin with, young enthusiast Roman Kovács just wanted to change his local environment for the better, and to help people. The idea of manufacturing environmentally friendly wooden toothbrushes and selling them to finance non-profit community projects occurred to him only later. And because Kovács aims to be as local as possible, he is currently collecting money to move his production of wooden toothbrushes from China to Slovakia. He wants to manufacture the brushes on historical machines and thus also help renew part of Bratislava’s industrial history.

Kovács’ approach to business was the opposite of the typical one. Entrepreneurs usually draw up a thorough business plan, earn money and only then start to think what they can do for the environment in which they live, or for society in general. In Kovács’ case, it was the other way round.

Primarily, he wanted to do something concrete to improve and enhance the environment in which he lives and at the same time to motivate people. And he wanted to do this via a non-profit organisation, for which he needed a source of finance.

“I said to myself: why not do something that can earn a living for me as well as this organisation, and from this also help others?” Kovács told The Slovak Spectator.

This is how the concept for his company, ecoheart, was born. The company manufactures an eco-friendly product and invests 10 percent of the profits in local community projects.

To begin with, Kovács did not have a product to manufacture. It was an accident which helped him to find one: when surfing the internet he came across a US producer of wooden toothbrushes, Bogobrush.

“At that moment I realised that a toothbrush is a perfect product for what I want to do,” said Kovács. “A person uses a toothbrush every day. In the morning, when cleaning his teeth he thinks about what a day he will have. In the evening he thinks about everything he did during the day. And all this while looking into the mirror.”

Kovács immediately started to research where he could manufacture wooden toothbrushes. But he did not find any such factory in Slovakia or elsewhere in Europe. All toothbrush production had moved to China, where it was cheaper.

“In Slovakia there were left only brush companies manufacturing birch brushes, painting brushes and various brushware,” said Kovács. “But they were not able to manufacture toothbrushes for us.”

Thus he also turned to China and found a factory there that could produce bamboo toothbrushes for him.

But now, four years on, he plans to move production to Slovakia.

“I like this country and even though we are not a very big company, we can employ local people and use local materials and support this country in this way,” said Kovács.

Kovács estimates the costs of moving production from China to Bratislava at about €30,000. Of this sum, he plans to raise €7,500 via the crowd-funding project First Plant for Manufacturing Toothbrushes in Europe. The rest he intends to cover from his own resources.

By May 18, he had already managed to collect more than the target sum; people can still contribute, and thus qualify for related rewards, until May 25.

New machines for the production of toothbrushes cost hundreds of thousands of euros, which Kovács does not have. But he discovered he could buy old, disused machines for manufacturing toothbrushes, dating from 1969, at a much lower cost. 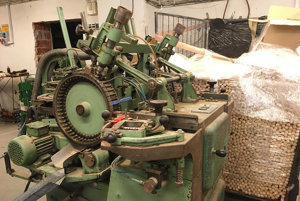 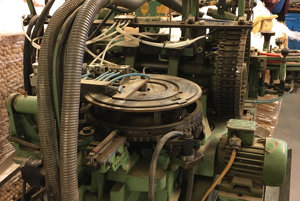 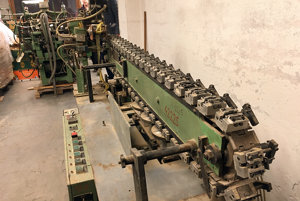 These machines were originally used to make toothbrushes at the Cosmos plant in Bratislava, near to where the National Bank of Slovakia building now stands. The plant occupied the former Gruneberger Brothers brushware factory, built in the late 19th century. This plant was so successful that it grew to be the biggest brushware producer in the whole of Austria-Hungary at that time.

The Cosmos plant operated into the late 1980s, but after privatisation in the 1990s it went bankrupt.

Later, much of the premises was pulled down and the Hotel Saffron was built on the site. The surviving buildings are not suitable for production of toothbrushes any more, even though Kovács’ primary idea was to return the old machines to their original location.

Now Kovács is looking for space where he can move the historical machines and start making toothbrushes again. His dream is to have a café next to the workshop, from which people can view the brush production through a large glass window while drinking their coffee. Those with a particular interest could even take a factory tour.

In the workshop, Kovács would like to employ disabled or socially excluded people, i.e. people who typically find it difficult to secure employment. At the beginning, he says he will need two people, but the number may later rise to six.

While the Chinese produce bamboo toothbrushes, in Slovakia Kovács want to have them manufactured from local wood.

Among locally sourced types of wood, beech is the most suitable for toothbrushes. But they can also be manufactured from oak, walnut or poplar.

“It will depend on what kind of wood we get, because we will manufacture the toothbrushes from wood that is not suitable for any further processing and has been selected for burning,” said Kovács.

It is possible to manufacture as many as 20,000 toothbrushes from a single cubic metre of wood, so the production does pose any threat to Slovakia’s forests.

The surface of the brushes will be treated with local beeswax.

In China, ecoheart manufactures toothbrushes with only soft bristles, but the plan is to extend the range with other varieties and also manufacture toothbrushes for children.

So far, ecoheart’s toothbrushes have undergone three stages of innovation, and the Dr. Martin dental clinic in Bratislava’s Petržalka district is also helping with their design.

Ecoheart distributes the toothbrushes via various channels. People can buy them via its e-shop, or at Profimed or DM drogerie. One toothbrush costs €5.49 in its e-shop.

Kovács has not calculated how much of the money from production and sale of the toothbrushes has gone into local community projects. He rather remembers the projects themselves. Ecoheart supported, for example, the initiative “Thanks, neighbour”, which installs public book boxes.

“We created for them a large two-metre long seat with a wooden book box in front of the Old Market Hall,” recalled Kovács. “Now it is placed near the Žufaňa bistro in Dulovo Square.”

Ecoheart started a food-sharing project using public fridges, and participated in the improvement of a rail crossing in the unused Filiálka train station. It also sent wooden toothbrushes to children in Rwanda, distributed them among refugees, and collected clothes and co-financed dental treatment for a Nota Bene salesperson.

Kovács is currently investing all his energy and money into moving production from China to Slovakia.

“Also, moving the production to Slovakia has a social dimension,” said Kovács. “We want to manufacture from local materials and employ local people. If we succeed, and manufacture the toothbrushes in Slovakia, we will certainly continue to donate 10 percent of the profits to local community projects.”