His photo travelled around the globe. He got a punch in the face

For three days, he only had time to take calls and answer emails. Almost all the important global media outlets called or emailed Vladimír Čičmanec. 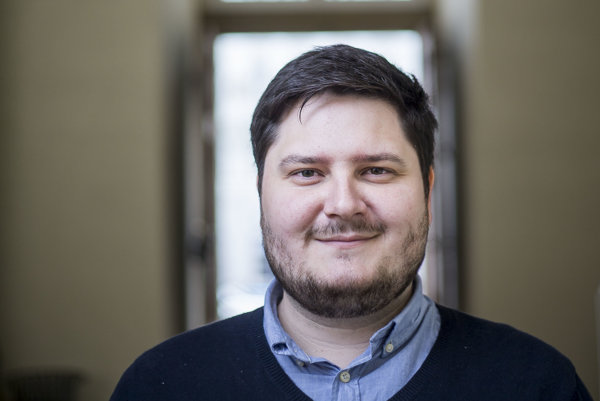 The picture of a Girl Scout talking to a right-wing extremist became – for a while – a symbol of the disapproval of neo-Nazi ideology. The photo taken by Slovak, Vladimír Čičmanec, appeared on CNN and in The New York Times, The Independent, The Guardian and The Washington Post. For a while, it defied his status of “amateur photographer”, just a single year after he bought his first camera.

What is it like when the global media start contacting you?

Bizarre. I did not have time to edit more photos, as I was constantly answering questions from the media for three days. My phone kept ringing the whole day. I answered emails and Facebook messages from dozens of media companies.

You wrote to some of them yourself, asking them to delete your photo. Did you actively monitor where it appeared?

No. I learned about The Telegraph from a journalist who wrote to me from Sweden, saying that they wanted to publish my photo which was in The Telegraph. That's why I contacted them. The people from The Daily Mail contacted me by themselves. It is a racist rag that has no par here. They constantly take an extremely right-wing racist line, writing something against refugees every day, so I refuse to be connected with them. All in all, I refused three offers from the media. 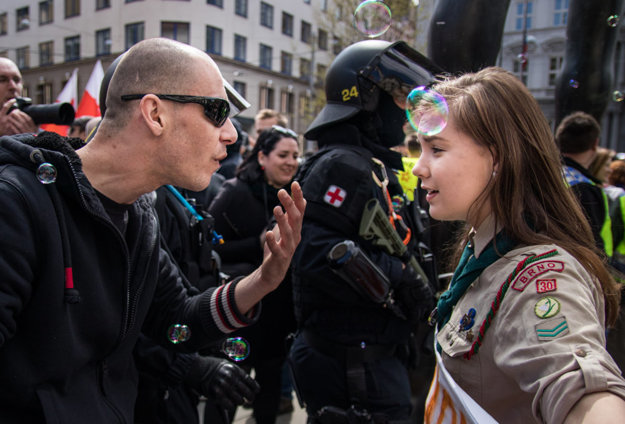 The photograph of Girl Scout Lucie Myslíková, aged 16, confronting an extremist was taken in the Czech city of Brno, during the May 1 protest called Those Who Play Do Not Salute the Nazi Way. The participants tried to block a neo-Nazi march, in a light-hearted way. (Source: Vladimír Čičmanec)

Sure. At first, many people wrote to me saying that it was a good picture which was pleasing. Then those from the other side also started writing – but there were not too many of them.

Did you at first publish the photo just for your friends?

Yes. It was Shooty who wrote to me to ask me to put it on public view. Then it all exploded. It was shared by the global website of the Scouts, then it got on Reddit, and the US media started to get interested in it.

You wrote on your blog that you actually failed to see the shot and someone else had drawn your attention to it. Where were you looking at that moment?

It was happening behind my back. There were constant petty conflicts but at that very moment, I was facing the stage.

How long did the situation last?

Lucia (Lucia Myslíková, the Girl Scout in the picture, ed. note) carried on talking with the neo-Nazi for about one minute after I arrived.

Did you feel it as something exceptional when shooting it?

When bubbles started to flow, I thought it was nice and it fitted the overall image... And that it would look good on Facebook and would probably bring me some Likes. I also remembered the photos from Birmingham and America where there were several strong women facing such people.

You also mentioned that someone hit you. Where did you got hit?

I got a punch in the face.

The neo-Nazis disliked the fact that I was there with a camera from the very beginning. They made various threatening gestures and shouted at me. At one point a friend of mine started handing out hummus for free and a guy in the crowd shouted at him to pick it up so I told him he could not give orders to my friend. Then he swiped at me, first hitting the camera and then my face.

So, you stopped being a photographer and suddenly became a protester; you had a double role.

Yes, I left the role of photographer. For the whole time, I had tried not to do that and to keep silent but at that moment, I failed but having a camera in your hand means you have some kind of an exemption. The police let me go everywhere and people perceived me differently.

You call yourself an amateur photographer. What does that mean in your case and what kind of photography do you focus on?

I have had the camera for just slightly more than a year and I take photos mostly of such demonstrations. So far, I have been to about four of them. I enjoy shooting the things that happen and where I don't have to invent or create anything, as the scenes happen themselves, more or less. 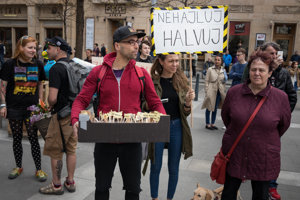 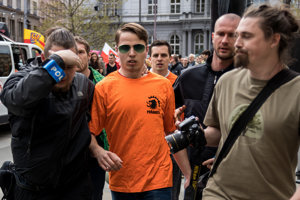 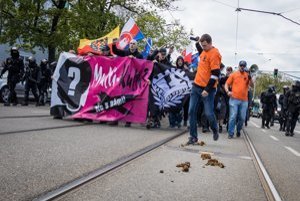 Brno, May 1 protest called Those Who Play Do Not Salute the Nazi Way (7 photos)

Did you go to such events earlier, before you got the camera?

Yes. It is the same – only that now I take my equipment with me, too.

What kinds of demonstrations do you prefer?

Why demonstrations? Do you expect something specific from them?

I did not expect anything. I was inspired by the Czech photographer Petr "Zewlakk" Vrabec who attended only such events.

Many hobby photographers take pictures to have nice photos and to be able to put them, for example, on a computer screen background. Your case appears to be different. Where should your photos be put?

Only on Facebook and I have my private archives from them. It brings me the same joy. Now and then, they get picked up by the media but this is not my goal.

Are your photos good?

Not very good, I would say.

Could they be better?

What is wrong with them?

In this case, the photograph is not quite focused as I thought I was shooting with an aperture of 5.6, and in fact, I was using 2.8. I also have to learn to work more with composition. A demonstration is the kind of environment when you need to react quickly and know your camera well.

Thanks to this experience, have you learned something you can use to improve at the next demonstration?

I learned to pay more attention – and what to pay attention to, after failing to notice the shot for myself.

Were there any professional photographers?

There were many of them. Some were angered that the best photo was taken by an amateur. That says something about Czech photo-journalism. I will not comment on that. I don't want to and cannot criticise professional photographers.

After all, now anyone can take such a photo with a mobile phone – anyone who is in just the right place.

Yes, there were many coincidences behind this.

How do you make your living?

I am a programmer. I graduated from a course in international relations and European studies but I have been programming since I was a kid. Maybe programmer is too strong a word, however.

How do you remember the protest itself?

It was great. I thought there would be too few people but ultimately there were more of them than the extremists. They had interesting ideas and everyone did some kind of activity. It was non-violent and natural, we had fun – and at the same time, we stood up against them. A few people got hit, cyclists got their bikes kicked and someone was detained by the police. There were conflicts all the time but we did not provoke them.

How long did it last?

For about three hours.

Can photography change anything?

It can. Not by capturing something that happened in a moment but by the interpretation. My picture became a symbol but people have given it their own meanings.

Vladimír Čičmanec (1985) was born in Banská Bystrica and graduated in International Relations and European Studies from the Faculty of Social Studies of the Masaryk University in Brno. He works as a computer programmer and started hobby photography a year ago. He focuses on demonstrations and events that fight for human rights, against racism or injustice. At one of them, he took a photograph that was published by the world‘s media such as CNN, The New York Times, The Independent, The Guardian and The Washington Post.