Another salary negotiation at Volkswagen fails

The strike continues, the representatives of the trade unions say it would be a mistake to give up.

The strike at Bratislava-based carmaker Volkswagen Slovakia will continue despite further talks on June 23, as the representatives of the trade unions have still declined to accept a deal on the salary increase and further bonuses with the company’s management.

“I have a feeling that our employer isn’t missing you,” Zoroslav Smolinský, head of the Modern Trade Unions Volkswagen (MOV) organisation, said after the June 22 talks, as quoted by the Sme daily.

The carmaker increased its previous offer only slightly, by 0.3 percent. This means that it proposes to hike the salaries by 4.5 percent this year and another 4.5 percent next year. It also suggests giving the employees a one-off bonus of €350 this year. 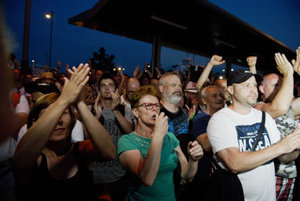 Although the trade unions also decreased their original offer, they are still asking for more than Volskwagen Slovakia’s management are willing to offer. The union wants salaries to increase by 13.9 percent, in two phases. Smolinský stressed that this proposal was final, as reported by Sme.

“We don’t know whether we’ll meet or not,” he said about the possibility of future talks.

Smolinský added that the strike will now toughen up.

“We will check our legal position to see how to continue the strike and what other options are available,” he said, as quoted by Sme. “They will not decide on everything; you, the employees, will. We’re not inciting a revolution.”

The strike will continue during the weekend, Smolinský added, stressing “it would be a mistake to give up now”.

Volkswagen Slovakia meanwhile issued a statement, claiming it has made several responsive steps, but the trade unions have refused their offers. They have not agreed on more talks yet.

“The next negotiations will take place only after the trade unions ask for it,” said the carmaker’s spokesperson, Lucia Kovarovič Makayová, as quoted by Sme. “We hope the continuing strike will not lead to a further lessening of the company’s trust in us, which may have negative consequences for our company and the stability of jobs in the future.”

Meanwhile, production at the Devínska Nová Ves plant is paralysed, with neither luxury nor SUV cars being produced. Only a few vehicle types - the VW Up! and the Škoda Citigo are being made.

The employees who are striking have lost about €225 on average, Sme wrote.

Some of them have even started asking for holiday.

“I can confirm such cases have occurred,” said the carmaker’s spokesperson, Lucia Kovarovič Makayová, as quoted by Sme.